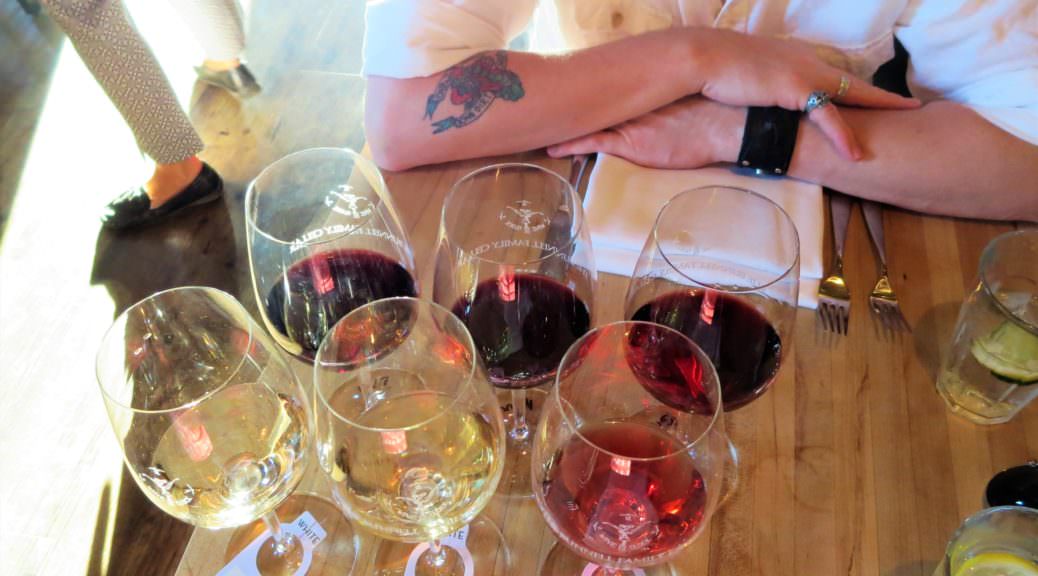 Wine tasting in Prosser, WA: Visiting a tiny historic town in the Horse Heaven Hills, with lots of wineries and a fabulous dinner

For our anniversary this year, we wanted a quick getaway out of the city, but we didn’t have a lot of time or money. Since we both love wine tasting and have so much of Washington’s extensive wine country left to explore, we decided to check out Prosser.

Prosser is in the Yakima Valley and Horse Heaven Hills region of southern Washington State. It is about a 45 minute drive south east of Yakima, and an hour and a half west of Walla Walla. It was roughly a 3.5 hour trek from Seattle. We chose Prosser as it appeared from looking at the map that there were quite a few tasting rooms and a nice restaurant in walking distance from the Best Western, which meant that we didn’t have to worry about drinking and transportation.

We left Seattle at 8:00 AM on Saturday, timing our arrival in Prosser for right around when the winery tasting rooms open. Once we began our drive south on I-84 just after Ellensburg, the landscape changed dramatically. The mountain forests and valley farmland gave way to dry, rolling hills and desert sagebrush.

We arrived in Prosser just after 11:00, and ventured into the historic downtown area. It was late morning on a Saturday, but downtown had barely a soul in site. There were some antique shops open, but not a whole lot going on. The buildings were old, reminiscent of the wild west. Prosser felt like a ghost town that a group of people had recently decided to inhabit again.

We had brought some picnic items with us, but wanted to find a grocery store where we could get a baguette to go with our meats, cheese, and pickles. The only grocery store in town appeared to be the Prosser Food Depot in the downtown area. We were able to find a baguette, and the store looked like it had most of the essentials.

Armed with snacks, we were ready to taste some wine. Our first stop was 14 Hands Winery just on the outskirts of downtown. We were familiar with their commonly found grocery store wines, and wanted to know what else they had to offer.

14 Hands Winery is themed after the Horse Heaven Hills and the wild horses that once inhabited this region of Eastern Washington. Our host was very friendly and greeted us immediately when we walked in, and had no problem with us bringing in a few snacks while we were tasting the wine. There was a country band playing that was covering old Johnny Cash songs and other old-style country songs.

The wines we tasted were their reserves, only available at the winery. The reserve Syrah was our favorite of the wines we tried, which included a Savignon Blanc, a Chardonnay, a Rose of Malbec, a Cabernet, and a Merlot. They were all nice, but not wonderful enough to make us cough up the $30 a bottle price. The tasting fee was $7.00 per person, waived if you buy a bottle. They sell their regularly distributed wines there as well for $10-$12 a bottle, so it made sense to buy two of those for a few extra dollars than to pay the tasting fee.

Next, we moved on outside of town to one of the oldest wineries in the region, Pontin Del Roza. Pontin Del Roza Winery has been making wine since the 1980’s, but the Pontin family has been farming the land for the majority of the 20th century. The tasting room was air conditioned and quiet, giving us a chance to talk to owner for a bit.

Pontin Del Roza Winery had a very nice sweet (but not too sweet) Chenin Blanc, a couple reds that I hadn’t heard of (but wasn’t a huge fan of), and some other very tasty wines including a Merlot, a Cabernet, and a nice Rose.

The outdoor patio was very relaxing and there was a bocce ball court. We were welcome to sit and eat the rest of our picnic out on the patio. There were carafes of water with mint and cucumber, and sodas for sale as well. I ordered a glass of the Chenin Blanc to go with our picnic and got an extremely generous pour.

After lunch at Pontin Del Roza, we were ready to check into the hotel and ditch the car. You can only do a little bit of wine tasting if you are driving.

We checked into the Best Western at Horse Heaven Hills, which was about what you can expect a Best Western to be. It was nice to have AC and a fridge in the room, and the bed was comfortable.

We had chosen this Best Western because it was in walking distance to Prosser’s Vintner’s Village. Vintner’s Village is essentially the mini Disneyland of wine tasting, with 10 winery tasting rooms in one 32-acre area, along with one nice restaurant. There is also an RV park near the village with a RV sites, a couple of tent sites, and an outdoor pool as well if you want to camp.

Vintner’s Village is pretty much set up for wine tourism. The Village and the Best Western are fairly new, attempting to bring a collection of the regional wineries together in one spot, working together to make it convenient for tourists.

You’re not going to find picturesque vineyards and gorgeous grapes growing in the sun here. It’s pretty much just a collection of very large tasting rooms with a few nice courtyards. However, it was nice to taste at our leisure and not have to worry about driving or transportation.

We only made it to two of the tasting rooms, as it was late in the afternoon. The tasting rooms are generally open from 11:00 or 12:00 to 4:00 or 5:00 in the afternoon. The 91 degree desert sun was extremely hot. We approached a large complex called “Winemaker’s Loft” in the style of a Tuscan villa. Inside were a couple different wineries, and we started with Coyote Canyon.

We tasted a lot of wine at Coyote Canyon, and the wine server and her little dog were very accommodating. We didn’t taste any that “wowed” us enough to buy a bottle, so we thanked them and headed next door to Martinez & Martinez. We were a bit tipsy at this point, so this was going to have to be our last stop. It was also just about closing time for the tasting rooms.

Martinez & Martinez has a little tasting room with a lot of Mexican-inspired art. The hosts were friendly. The best part about their tasting room however, was the frozen wine slushie machine. It was the perfect ending to our day of wine tasting on a hot Eastern Washington day. It was made with the Martinez & Martinez Rose, and tasted a lot like sangria with added fruit juice.

After we finished our slushie, we headed back to the room to cool off and rest for a bit.

Our dinner reservation was at 7:00 at the one restaurant in Vintner’s Village, Wine O Clock Wine Bar. I had read that reservations were strongly recommended, so I filled out their online contact form and requested a reservation the week prior.

The restaurant is part of the Bunnell Family wine cellar. The dining room is set up like you are eating in someone’s house, with a very homey open kitchen, tables with Kitchen Aid mixers and cook books in the corners, and a TV with muted vintage Julia Childs cooking shows running on a continuous loop.

The menu changes weekly with the seasonal whims of the chef and her garden. You can pair your entree with a suggested wine flight instead of committing to a single glass so that you can get a sampling of the Bunnell wines while you dine.

The water served had cucumbers in it, which was a nice refreshing touch on such a hot day.

We started with the burrata, which came with a fruit jam, fresh figs, and toasted baguette slices. Everything was top quality, although we did think the burrata cheese could have used just a pinch of sea salt or something to zest it up a bit. Just a personal preference.

For our entrees, Paddy had the pork loin with sweet potato cakes, and I had the nicoise salad with a bearnaise sauce, golden beets, and seared ahi tuna. Both were delicious.

Paddy’s entree had fresh garlic greens that were delicious. We couldn’t believe we’d never had them before. They kind of tasted like a garlicky asparagus stalk. Everything was delicious.

For dessert we shared the chocolate mousse cake, which came with a dessert wine of sorts that the server told us to taste before she would tell us what it was. It was sweet and robust and very complimentary to the rich chocolate. It was a cherry cordial, with no grapes at all. The chef makes it to serve in the restaurant but doesn’t have a license to bottle and sell it at the moment.

After dinner we walked outside into the warm twilight. It was such a nice evening, finally a comfortable temperature to walk around in. There was a party going on over at Winemaker’s Loft with a BBQ and a Mexican band. It looked fun but we didn’t feel like shelling out the $10 cover.

We wished we had the time and money to stay another night and check out more of the region and Vintner’s Village, but we’ll have to come back another time. The warm evening and the RV park across the street made us wish we had a trailer to camp in instead of the hotel.

Overall, Prosser was a great quick anniversary getaway and we’d love to come back. If you want to do some wine tasting in the Yakima to Walla Walla area of Washington, this is a great stop with easy access to a lot of wine and accommodations in one place.