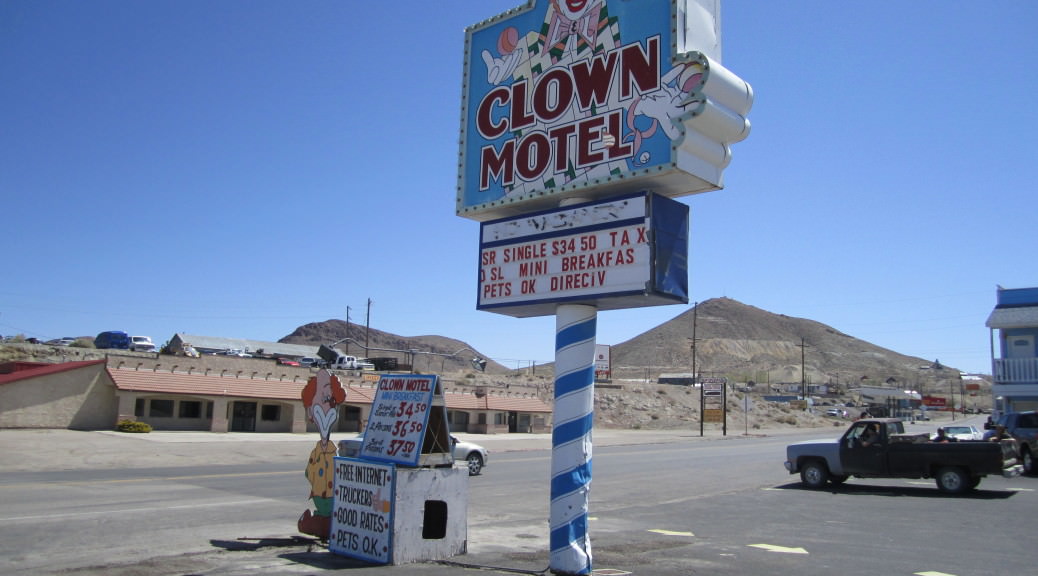 Weird things we saw in Nevada: Kitsch and Americana in the desert

There is a lot of weird stuff in Nevada. If a foreigner were to ask me what part of the United States to travel to where they could see the most unique Americana, I’d tell them to take a road trip around Nevada. Nevada is a desolate state, with pockets of decadence and extravagance (I.E. Reno and Las Vegas), loose laws and high security prisons, believers in alien life and leftover ghosts of Gold Rush days’ past. There are stretches of highway that go on for miles in between towns, which kept us nervously filling up our gas tank whenever it was only half full–just in case the next road was too long. It’s a state that will have you saying “what the fuck” at least once a day, but that’s the beauty of it. Here are the top weird things we saw in Nevada on our road trip in 2011:

1. A sign telling us to report shooting from the highway

Shortly after leaving the small town of Ely, Nevada, heading south on Highway 50, we passed a sign with an 800 number telling us to report any shooting from the highway. Because apparently, people driving around in their cars shooting rifles at wildlife (and who knows what else) is a common enough phenomenon in that part of rural Nevada that there is a hotline to report it. Sorry, we didn’t get a photo. We also passed a high security prison and a sign telling us not to pick up hitchhikers. Noted. 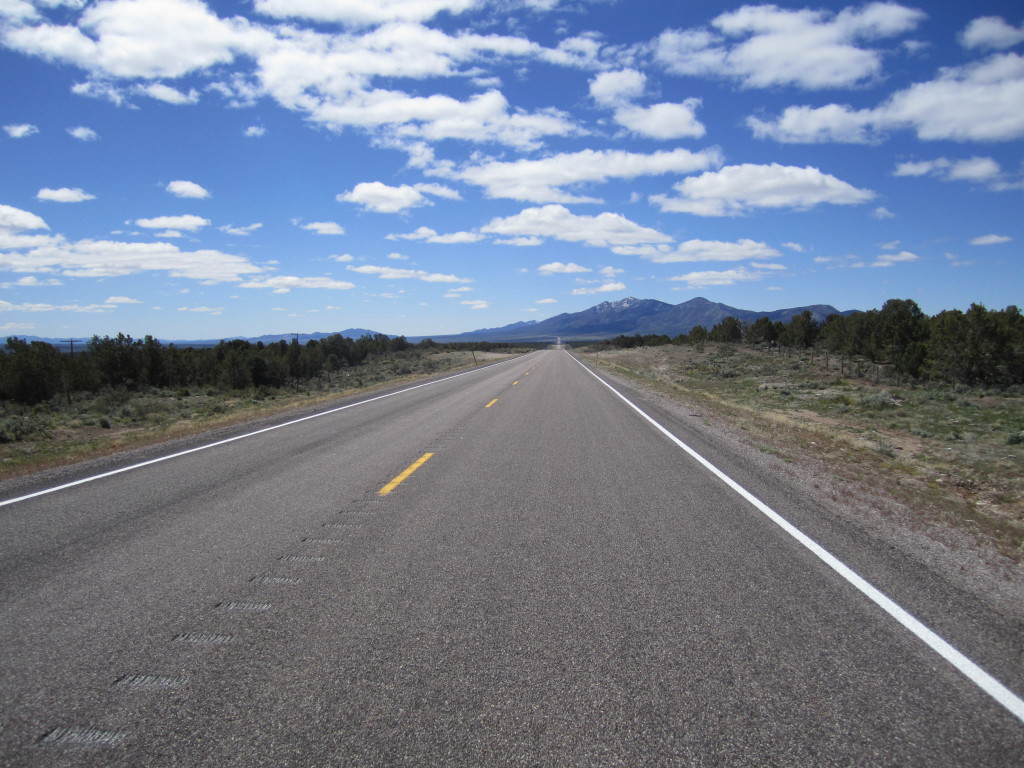 The Neon Boneyard is hands-down the coolest thing we’ve ever seen in Las Vegas. It is part of a small museum of Las Vegas past, with a fenced-in corral across the street where all the old neon signs of Vegas go to die. Reservations for tours are usually required, so plan ahead. Don’t miss it.

The second coolest thing I’ve seen in Las Vegas is the Mermaid Lounge at the Silverton Casino. The waitresses dress in mermaid-inspired attire, there is a live jellyfish tank filled with moon jellies over the bar, and a giant floor to ceiling tropical fish aquarium next to the bar. The best part? They do live mermaid shows in the aquarium several times a day. The Silverton Casino is a little bit out of the way from the strip, but an easy cab ride. It’s more of a local casino.

4. The Peppermill Casino in Reno

We stayed two nights at the Peppermill Casino in Reno, and ate at their Oceano Restaurant. It is an extraordinary neon disaster of a luxury casino, with multiple restaurants, bars, slot machines, and game areas. There are several types of rooms–we went for the cheesy 80’s spa suite in the Peppermill tower with a two person hot tub and a giant four poster bed. If you really want to be a high roller, you can book their “safari adventure” or “Roman opulence” suites complete with a hot tub in the living room and themed decor.

The amount of neon inside the casino really is astounding, especially in the Oceano Restaurant. We had to eat there just because it had jellyfish lights. The food wasn’t anything special, but it was a neon aquatic catastrophe that had to be fully experienced. Even if you don’t stay here, it is worth stopping by to take it all in.

We drove by a total of 6 brothels on our road trip around Nevada, and decided to pull over for a photo of this one. We were given notice of it’s location a mile beforehand from a hand-painted plywood sign on the side of the road in the highway. There is literally nothing around for miles.

It was a collection of travel trailers in the middle of nowhere. Classy.

We wanted to see Death Valley National Park, and there is an entrance from Nevada in the border town of Beatty. Just before the entrance to the park is the Rhyolite ghost town, which is pretty interesting. In addition to the ghost town, you get to tour a sculpture park. Some of the sculptures really fit with the theme (ghosts with bicycles), but others are just really random. Such as the giant nude lego-esque lady with a big blonde cube of pubic hair towering over the desert. It’s worth a looksie.

On the way from Beatty to Reno through Tonopah, Nevada we stopped to take a photo at the Clown Motel. Rates were advertised at $34.50/night and the rooms are clown themed. We would have totally stayed there had it worked into our itinerary. The creepiness of a clown themed motel in the middle of the desert is pretty high, but adding to it is a very old wild west era graveyard full of the bones of gold miners right next door.

If you stay here, you might not want to watch the movie Poltergeist close to the time of your trip.

One of the things we absolutely had to go out of our way to see was the Extraterrestrial Highway 375 that runs between Crystal Springs and Warm Springs. There is one tiny town called Rachel in the middle with an alien themed diner and hotel (The Little A’le-Inn). Don’t expect a gas station though, be sure to have a full tank when you start out.

The Extraterrestrial Highway is named for the reported UFO sightings in the area, which is also host to the mysterious super-secret Air Force test facility Area 51. I’m sure the UFO sightings are all related to the test facility….but what is the government doing out there, exactly? Don’t plan on finding out, there are signs around the property that state that the government has the right to shoot you if you enter their area.

In any event, it’s a sight to see. 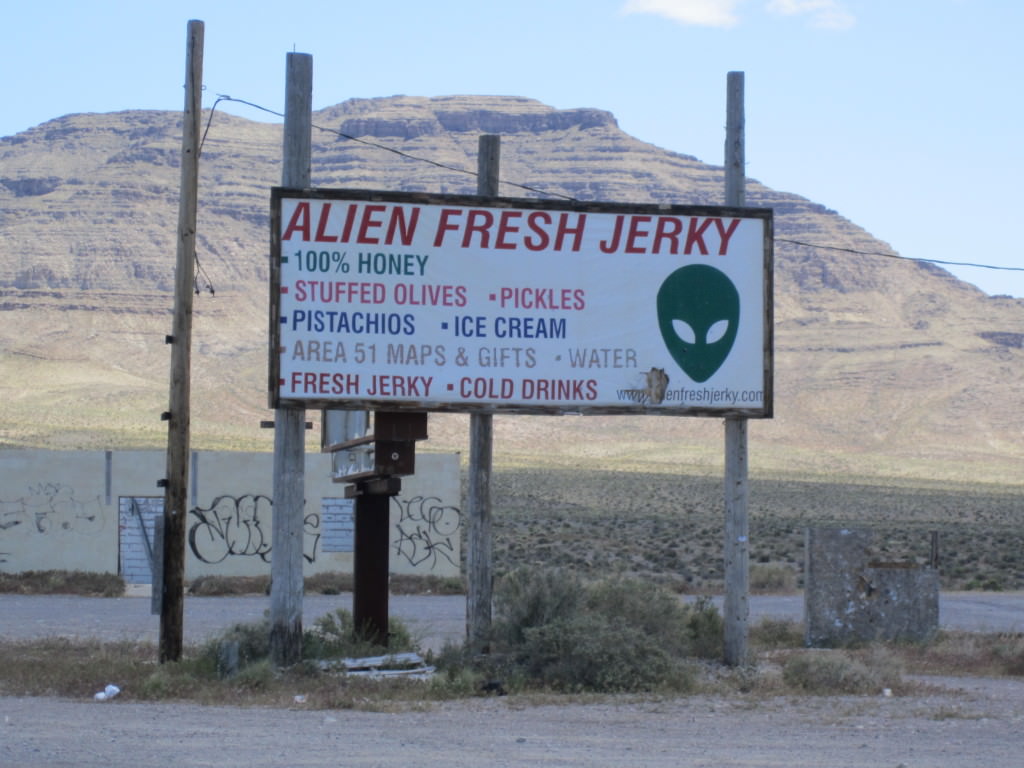 Our week-long road trip around Nevada was one of my favorite trips with Paddy. It wasn’t another country, but sometimes it felt like it. I’m always on the hunt for the unusual, and the weird things we saw in Nevada were some of the best I’ve encountered. Sometimes I wonder if the desert makes people go a little crazy. The arid climate, the heat, the monotonous landscape and roads that go on for miles in the dry emptiness. It was fun, but I can’t tell you how excited I was to see green fresh veggies and leafy green trees when we got back to the Pacific Northwest.

Read about all our adventures in Nevada here: https://childfreelifeadventures.com/nevada-road-trip-2011/

3 thoughts on “The Weird Things We Saw in Nevada”