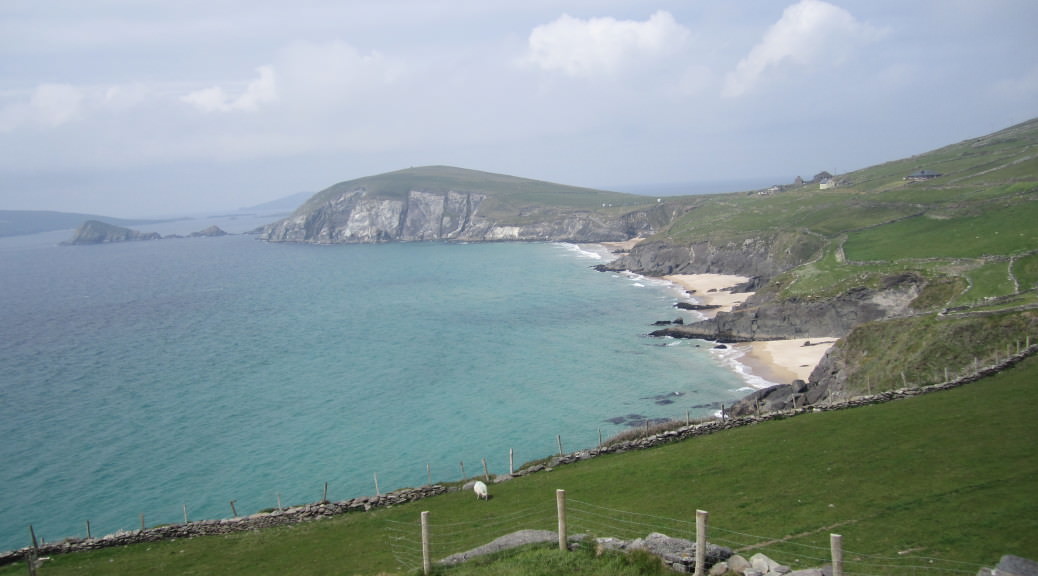 The Dingle Peninsula was one of the highlights of our trip to Ireland in May 2012. We only stayed there two nights but saw quite a bit. We would definitely recommend renting a car to see the Dingle peninsula, and Dingle town is also a great home base for other adventures nearby.

Bear in mind that Dingle is a tourist town, full of Irish tourists as well as foreigners. This means that the restaurant prices are going to be on par with most other coastal tourist towns in the US and elsewhere. Plan on budgeting a bit more if you want to eat out.

Read about our full trip to Ireland in 2012 here

We arrived in Dingle traveling from Cork, about a two and a half hour drive away. We had a reservation at the Lantern Townhouse in Dingle, a very nice B&B centrally located in town with an internet cafe across the street. The owner Katherine was very welcoming and definitely pays attention to detail. The room was very nicely decorated and quiet, with chocolates on the pillows and a carafe of water and glasses on the dresser.

Below: view from room

We walked around a little bit, and realized that Dingle is a very popular tourist town. It kind of reminded us a bit of our hometown of Friday Harbor, WA. It is also a popular tourist destination for Irish folks, and as we later learned that evening, for Irish bachelor and “hen” parties. The touristy popularity of the town unfortunately means higher prices at bars and restaurants, so budget accordingly.

For dinner, we found ourselves craving raw oysters like crazy. We looked at a few menus and decided on Ashe’s Restaurant as they had a deal on three oysters and a pint of Guinness. The interior was very cozy and the food was excellent. They even had Tabasco for the oysters. Hot sauce is something we had been seriously missing in Ireland.

After dinner, we started our hunt for local live music. We didn’t have to go very far before we found O’Flaherty’s. It was packed, but a table opened up soon after we arrived and we snagged it. An Irish band was playing and the beer was tasty. There was music going on all evening long, and we had a great time. At one point a “hen” party came in and joined a couple at the table next to us. They weren’t being very obnoxious, and the older gentleman at the table seemed delighted to have so many ladies surrounding him.

The next morning, we had a fantastic breakfast at the B&B, including homemade Irish breads, smoked salmon, eggs cooked to order, cheeses, salad, and meats.

We then spent the day exploring the Dingle Peninsula by touring around Slea Head Drive. The Dingle Peninsula is an area where people still speak Gaelic, so many signs aren’t in English. It was truly one of the most beautiful parts of Ireland that we saw, and I would definitely recommend making it a priority on your itinerary.

The weather began to turn that day, and the sun came out. I was actually able to go out in just a light sweatshirt and no hat and scarf. The roads were extremely narrow, and often a nerve-wracking experience driving around a sharp turn on the edge of a cliff only to face a giant tour bus coming the other direction. We made it out alive, though. **Note: the smaller the car, the better. 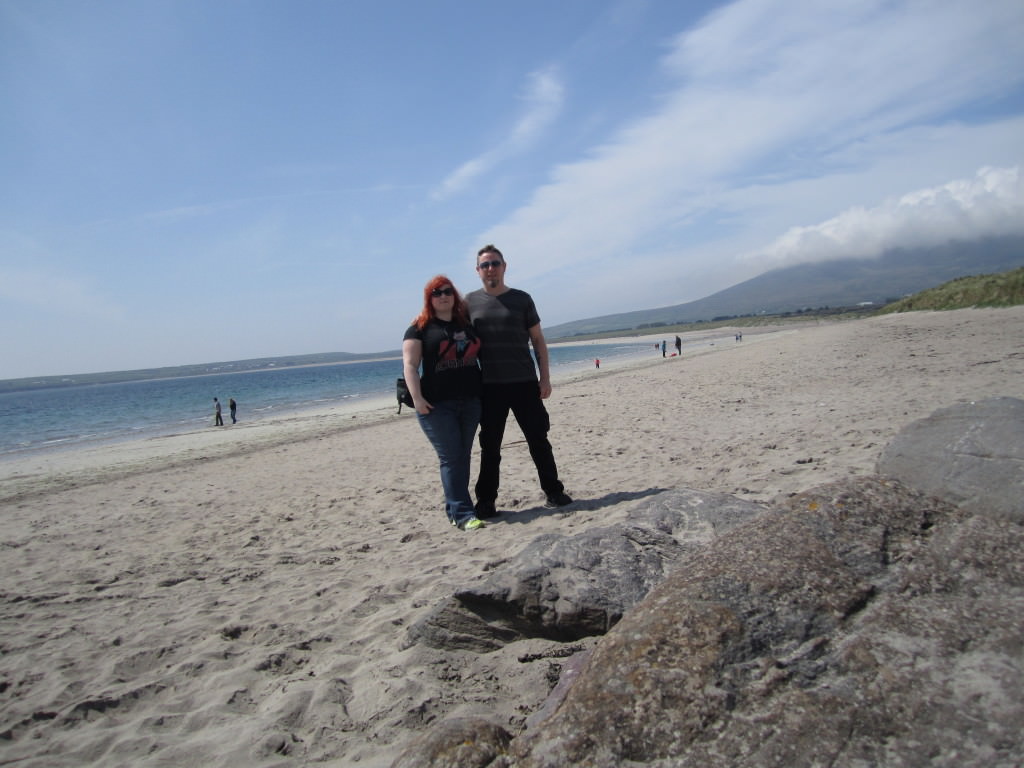 One of our stops on the Dingle Peninusla was at Clochuan, or the Fahan Beehive Huts. The date of origin of these ancient stone huts is undetermined, but believed to be built around the 12th century. We also stopped at the Dunbeg Fort, remains of another old ring fort built around the same period. It was really hard to wrap our heads around the age of the fort that was still there after over 1,000 years. The stone stacking construction looks simple, but has really stood the test of time. 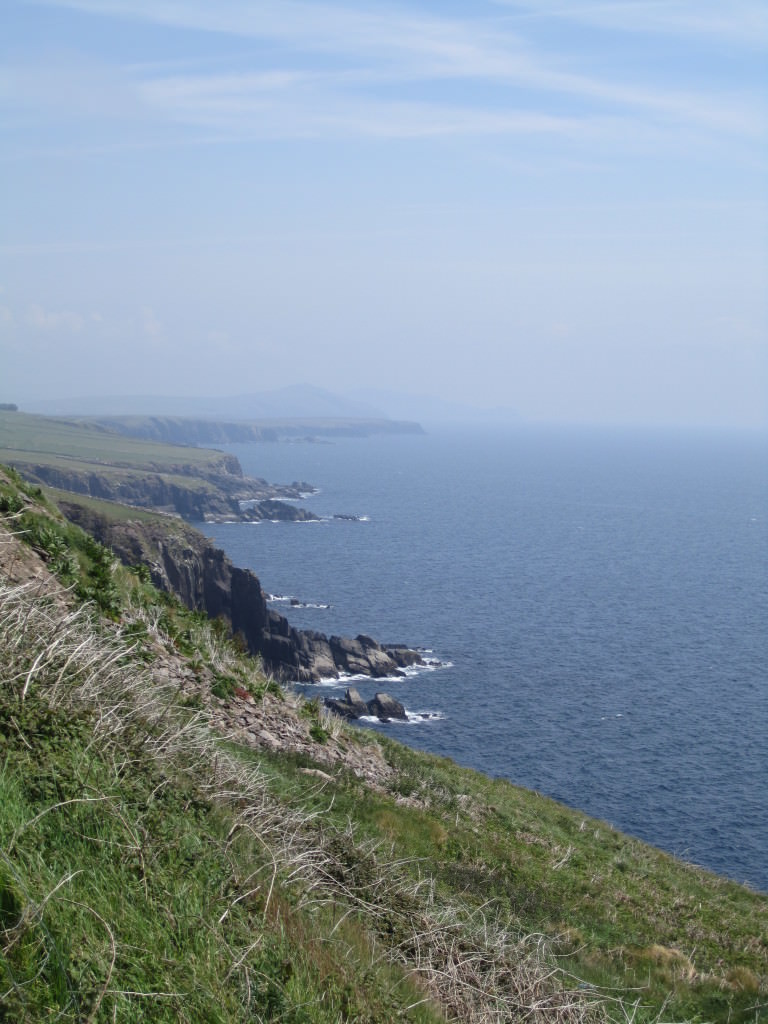 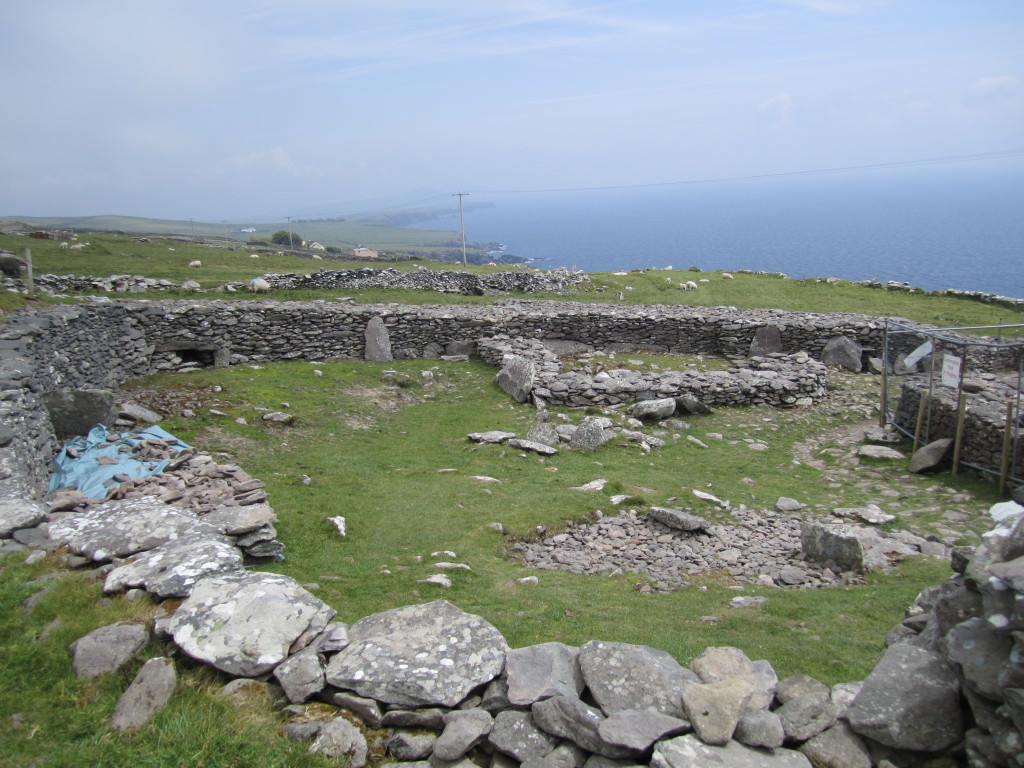 There were lots of sheep nearby relaxing in the meadows near the fort and beehive huts. They were spray-painted with pink and blue spray paint. I believe this is so that the farmers can let their sheep roam but still know which sheep  belong to which farmer. I had a very curious little lamb peeking at me from behind a fence, he was pretty adorable. 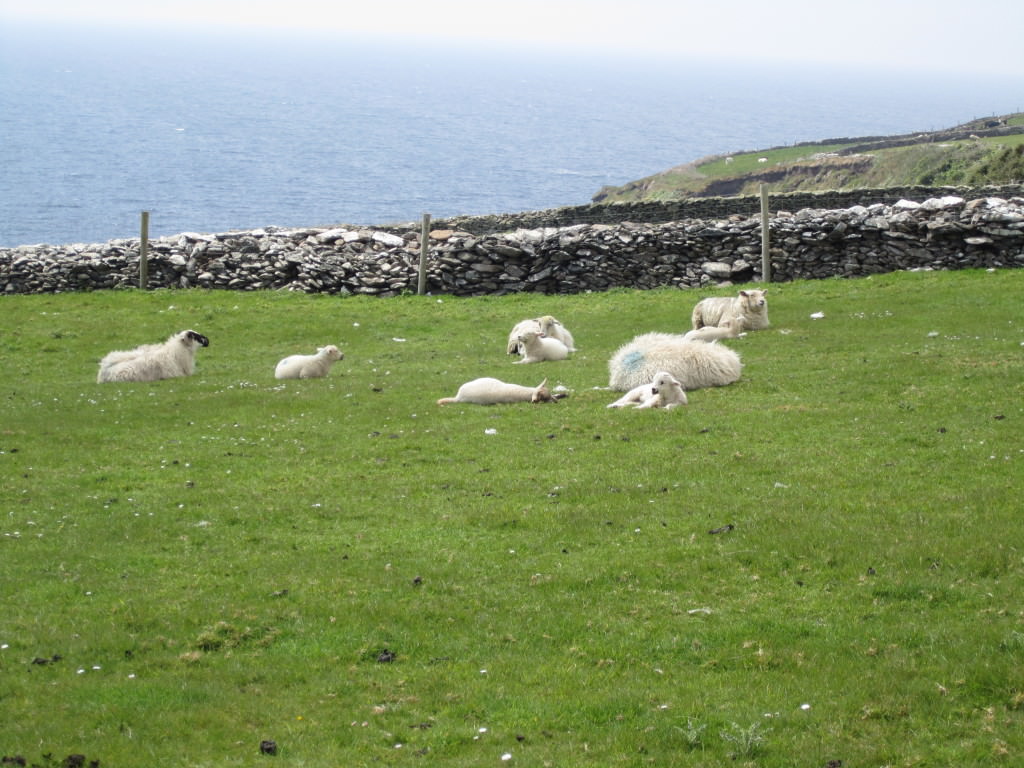 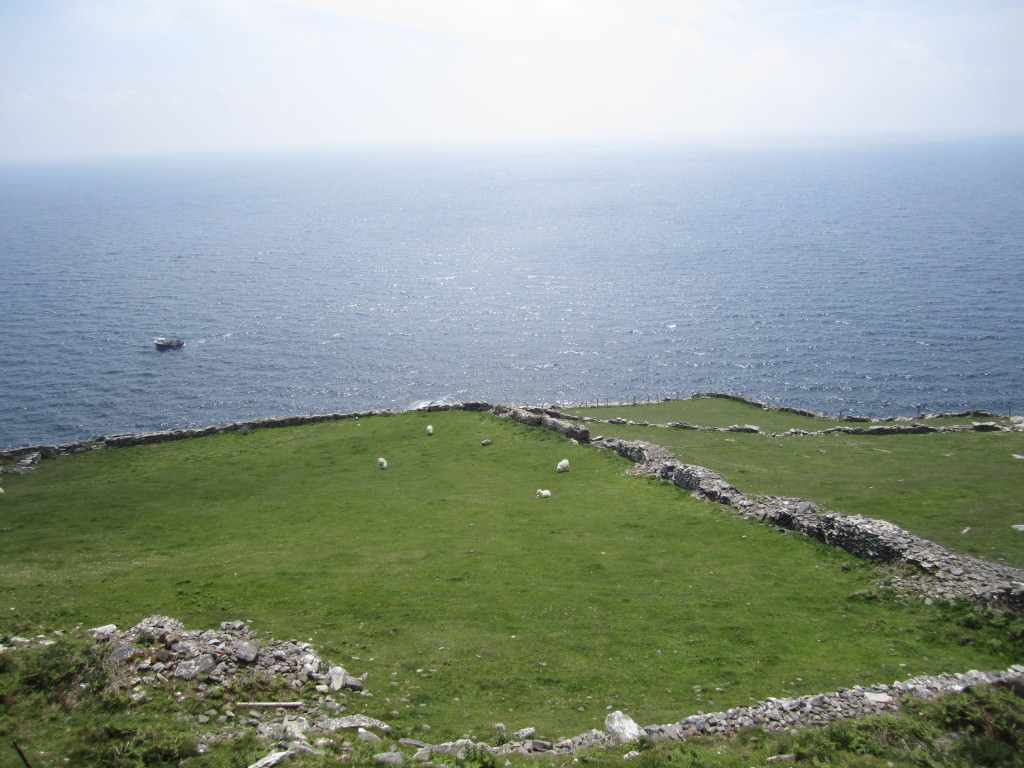 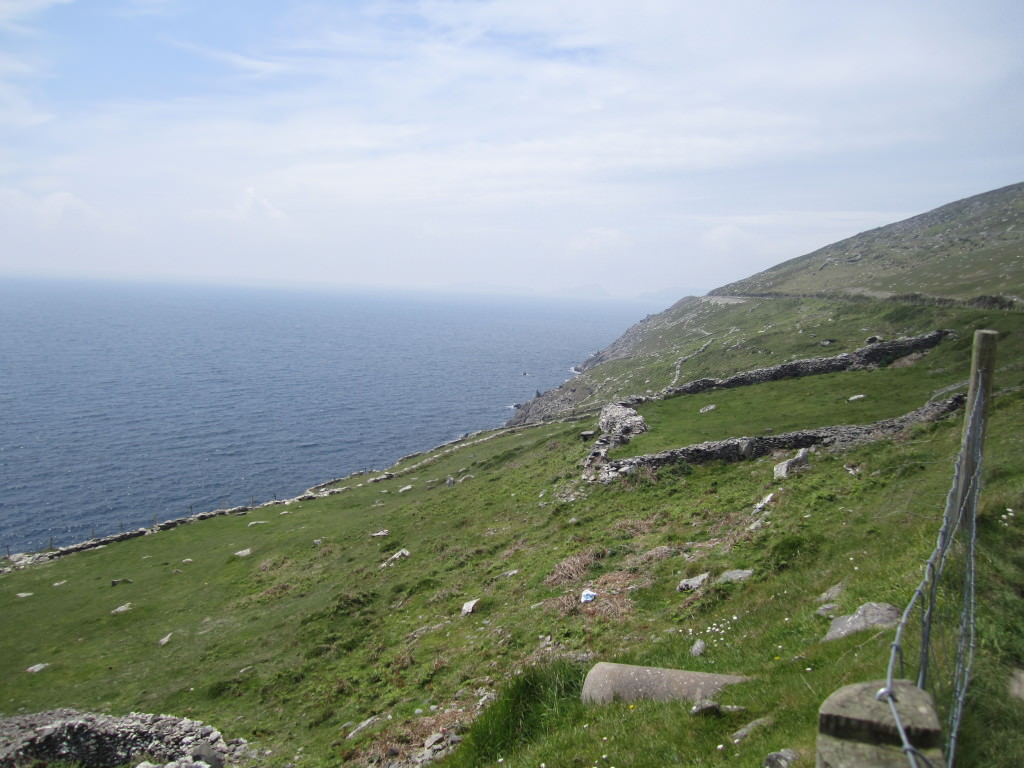 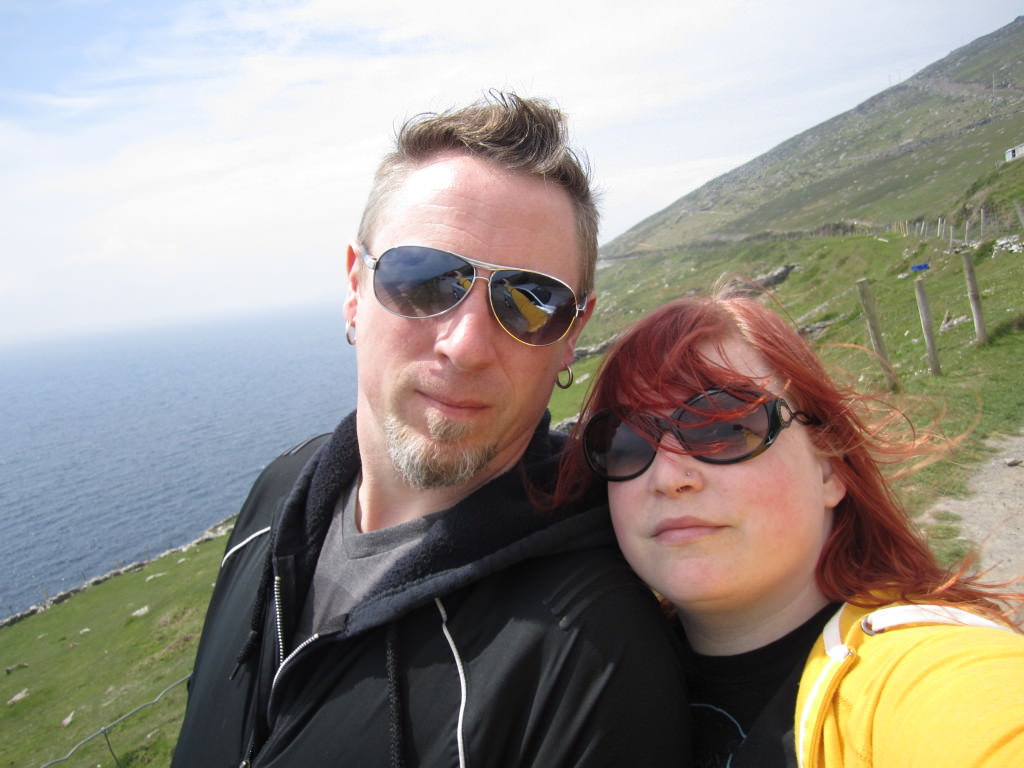 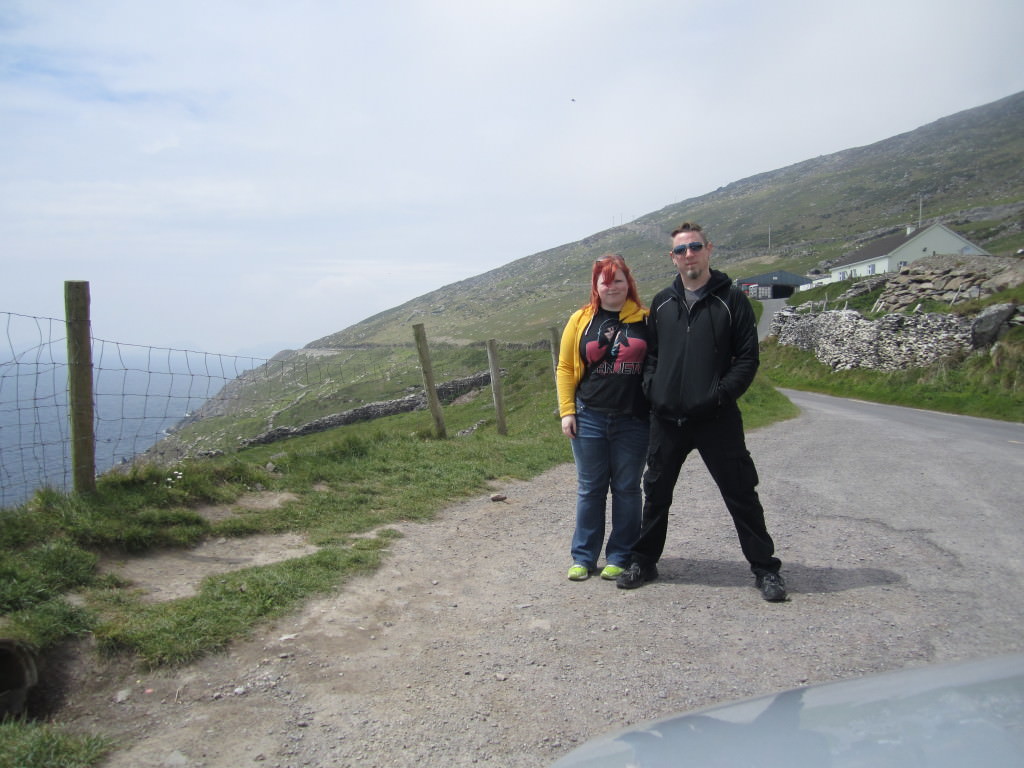 We continued our loop around Slea Head Drive on the Dingle Peninsula, taking in the beaches and farms. It almost put our beloved Oregon Coast to shame. 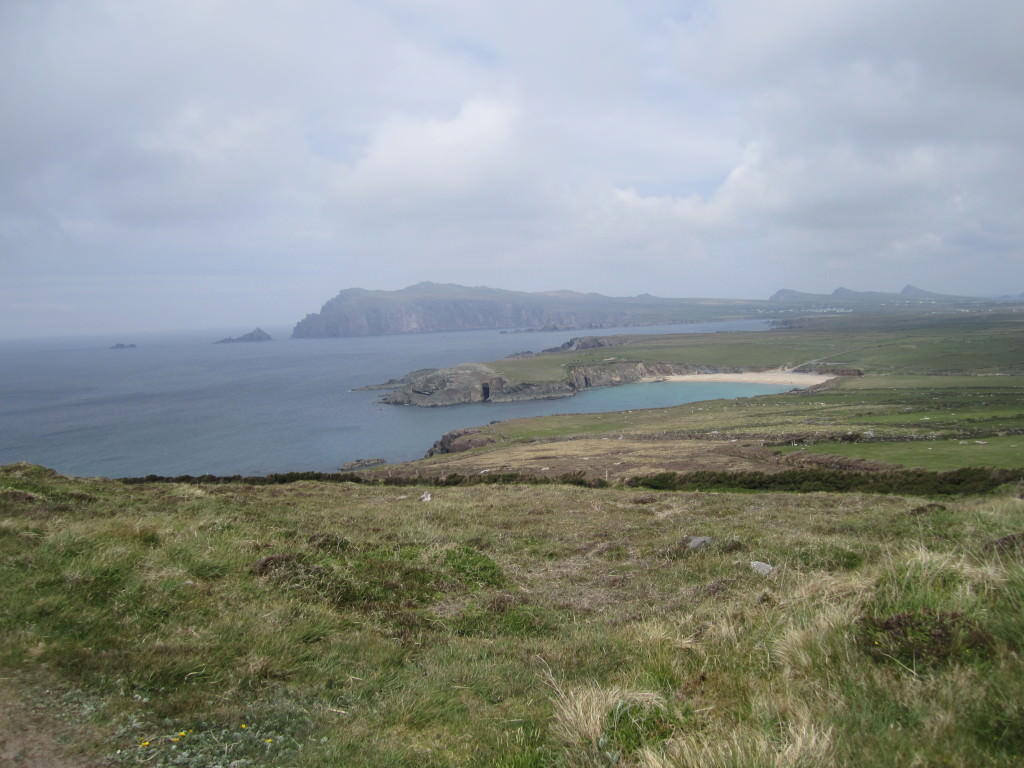 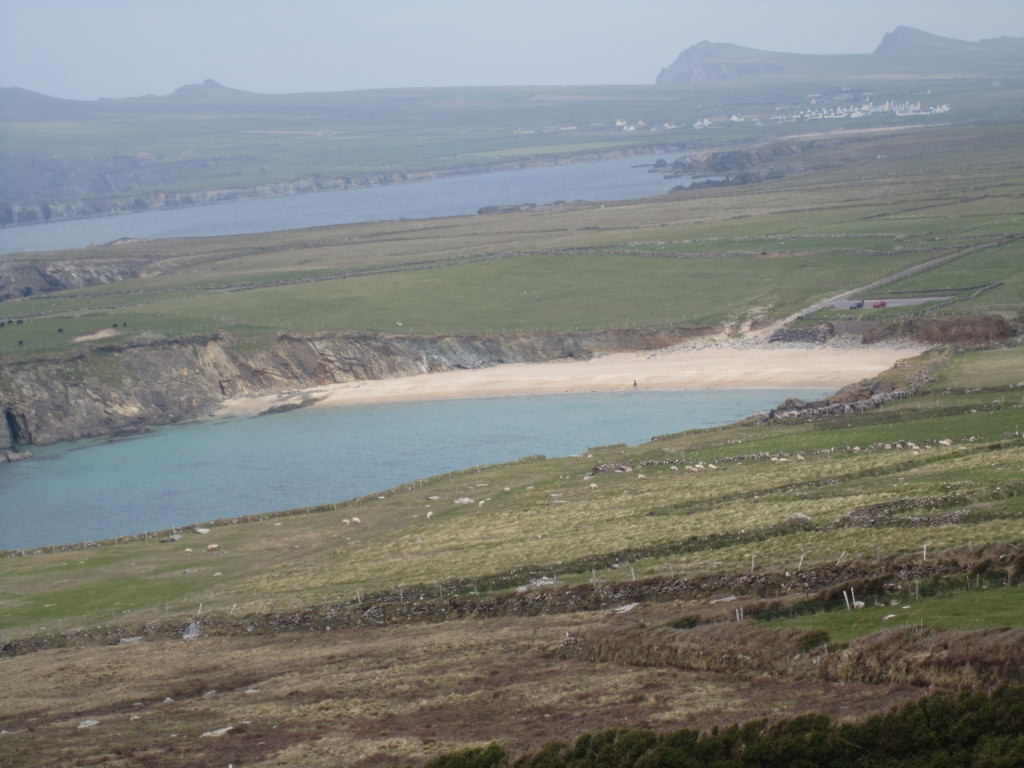 After a beautiful tour around the Dingle peninsula on Slea Head Drive, we made it back to Dingle and were extremely hungry. We wanted something relatively inexpensive, so we found a little seafood basket and burger place called Harrington’s Family Restaurant. It was pretty tasty, despite some bad yelp reviews. Affordable casual restaurants in Dingle seemed to be few and far between. After lunch, we walked around town some more and did some shopping. There were plenty of tourist shops around town selling woolen items and all the usual tourist souvenirs.

That evening, we were still craving oysters (we really like oysters, what can I say?). We looked around at some other restaurants, but decided to just go back to Ashe’s. The main reason being that we knew they had Tabasco sauce.

We went out again that night, running into a lot more bachelor parties and hen parties at the bars. The next morning we mentioned all the bachelor and hen parties to the owner of the Lantern Townhouse and found out that they aren’t very welcome in town by everyone. She said “When they call me to book a room here, I scoff.” Personally, I think Dublin is a better place for a raucous good time.

The Dingle Peninsula was one of the highlights of our two week trip to Ireland. Dingle town was cute, but a bit pricey. It was worth it, however. The coast and the history of the Dingle Peninsula is amazing, and definitely worth at least a two day visit. We wished we had another day, but had to leave the next morning for Galway.