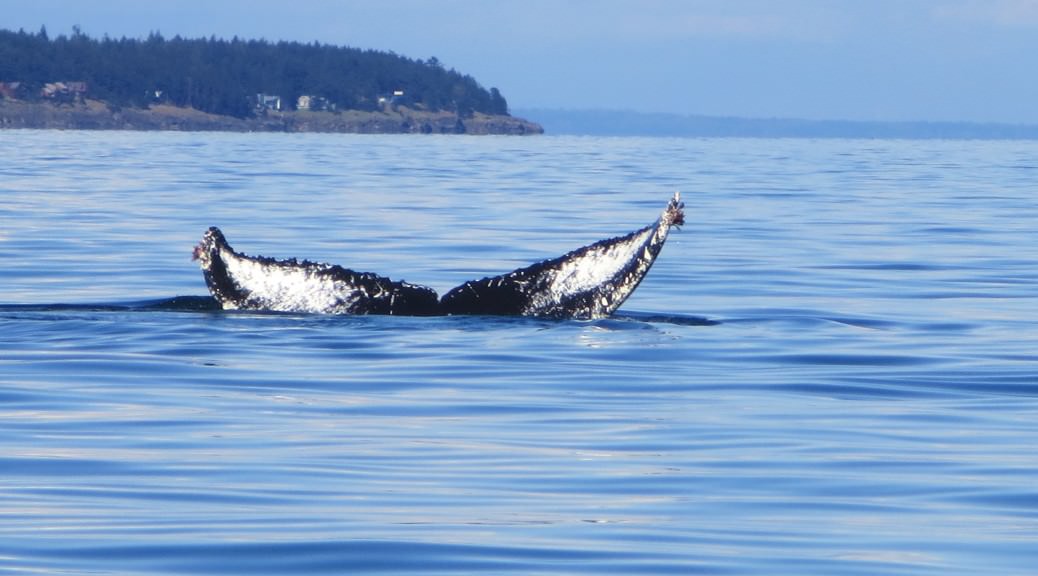 Whale watching in the San Juan Islands, WA with Legacy Charters. A day tour with fantastic guides, lots of wildlife, and a rare humpback whale sighting

Orca whales are one of the main attractions of the San Juan Islands in Washington. Every year, thousands of tourists flock to the islands and go on whale watch tours in hopes of catching a glimpse of these beautiful and often playful creatures in the wild. Paddy and I had been out whale watching in the San Juan Islands on a small boat whale watch tour about 10 years ago, and it was an amazing experience to see them so close. A huge male swam right under the boat, humbling us with a close look at his enormous size.

Summer is the peak time for whale watching in the San Juan Islands. Aside from having the best weather of the year, in summer the salmon come through the San Juans on their way to the Frazier River to spawn, increasing the food supply in the area for the southern resident orcas. Transient and resident orcas can be seen year round, but the increased population of orcas in the summer increases the chances of a sighting, and is usually the best time to go whale watching.

I was invited out on a whale watch tour in the spring with a good friend of mine, Rachel, and her husband Spencer with their tour company, Legacy Charters. Most whale watch tours only operate in the summer, but Legacy Charters operates all year long. They see plenty of orcas and wildlife in the winter as well as summer. Even if you don’t get to see whales, there are lots of other birds and marine animals to see, as well as the beautiful island scenery that you won’t see on a ferry. Tours last about 2.5 to 3 hours.

It was April, and rain was predicted all day. In addition, no Orca whales had been sighted in several days. While whales are the main attraction, I was hopeful that we might catch a glimpse of some other wildlife such as porpoises, harbor seals, bald eagles, and sea lions.

I met up with Rachel and Spencer at Snug Harbor, a quiet little harbor with a resort on the north west side of San Juan Island. Legacy Charter’s tours depart from the west side of the island, which is where the whales are usually sighted. It ended up being a magical afternoon. The sun came out (contrary to the dreary weather report), and the water was as calm as it could possibly get. I took my motion sickness medicine just in case, and we set out.

**If you suffer from seasickness, check out my post on motion sickness prevention.

As we departed, naturalist Heather showed us some miniature model whales and gave a quick presentation on the types of whales that can be seen in Puget Sound, and a little bit about each of them. 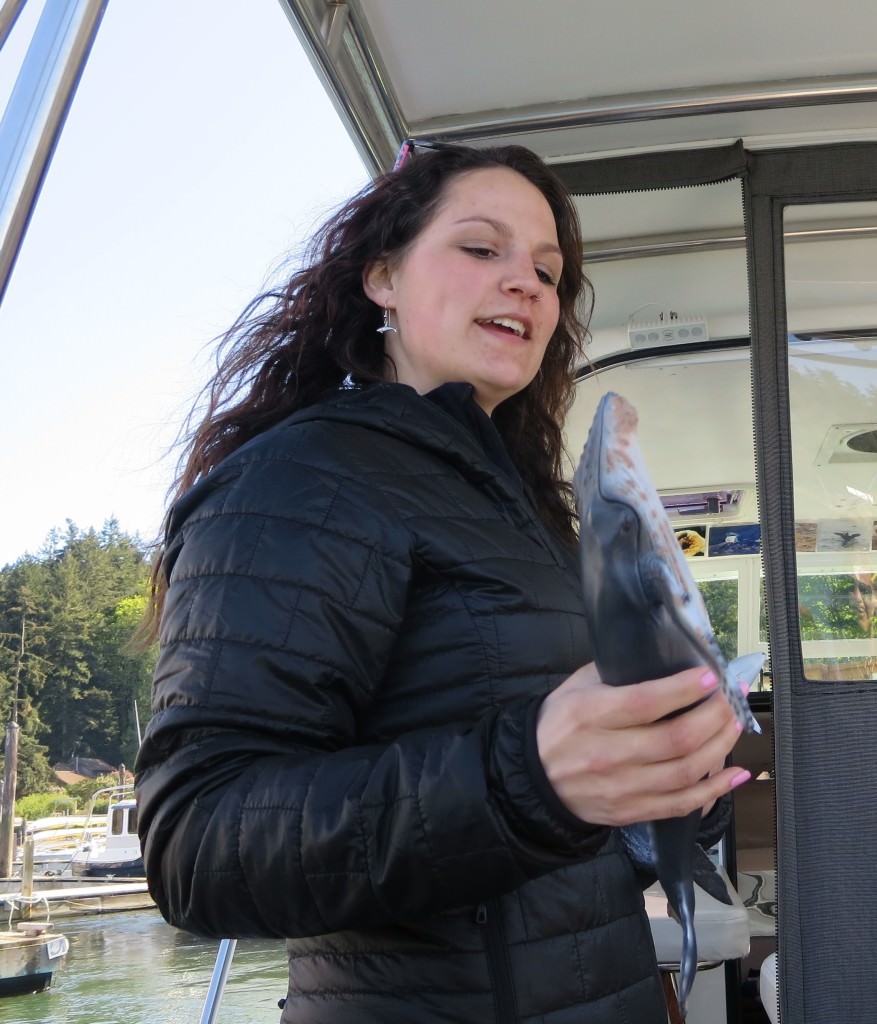 The types of whales you can find in Puget Sound  and the Salish Sea are the orca whale, gray whale, minke whale, and the humpback whale. The humpback whales spend the winter in warmer waters and only migrate to Puget Sound in the summer season. Humpback whale sightings are rare, but Rachel and Spencer had word that “Big Mama,” a female humpback who summers in the San Juans, was back earlier than usual and making an appearance that day in the waters just over the Canadian border.

Hopeful, we sped across the calm water to the area Big Mama was reportedly swimming. The sun was warm, but I was glad I had brought a hat and hooded rain coat, as the wind was cold while we traveled.

It wasn’t too long before we reached the area where Big Mama had been reported. Captain Spencer slowed the engine, and we waited. Within several minutes we saw her surface and blow water from her blowhole. Everyone was excited.

Spencer got a little closer, still keeping a safe distance. The fine for getting too close to a whale is pretty steep, and it is important to give the animals plenty of space for their safety. We watched her surface every few minutes for a little while, as she glided around in the water.

At one point we were all staring off the side of the boat, waiting for Big Mama to come up again, and she seemed to be down a little longer than usual. Suddenly she surfaced right near the back of the boat, spouting water from her blow hole and startling us all. It was so exciting to see her so close. She must have been a bit curious about our boat. Rachel and Spencer were really excited–they said they’ve never seen a humpback that close before in all their tours whale watching in the San Juan Islands.

We watched her for a bit longer, she swam further away but I managed a good zoom shot of her tail on one of the few times she did a deep dive and showed it to us.

Seeing Big Mama was definitely the highlight of the trip, but Captain Spencer was ready to see what other kinds of wild life we could find before the tour was over. We saw a couple of porpoises from a distance, but they were pretty far away. We passed a couple bald eagles sitting in the setting sun on the hills and trees of the islands we passed.

Pretty soon we reached what Captain Spencer called a “sea lion bachelor party” on Spieden Island. It was a congregation of stoic and blubbery steller sea lion males, sunning themselves proudly on the rocks while another group swam leisurely just off the shore. Rachel said they do this a lot, leave all the females and have some guy time. They were noisy, grunting and barking at each other over who got which spots on the rocks.

As we got closer to the rock, a horrendous smell wafted through the air. I asked Rachel if they were farting. “No,” she said. “That’s their breath.” Fortunately, the breeze shifted.

We watched the sea lions for a bit. They were aware of us, but seemed more interested in barking at each other.

We then continued back towards San Juan, passing two separate rocky outcroppings full of harbor seals sunning themselves, or as Captain Spencer calls them, “rock sausages.” They reminded me of our cats on a warm summer day on the patio.

They are very sausage-like, but the nickname also comes from the harbor seal being a favorite food for transient orcas. Resident orcas only eat salmon, while the transient orcas eat seals, porpoises, sea lions, and other marine mammals.

I asked Spencer and Rachel why the two groups of whales eat different cuisine. Spencer said it was cultural, kind of like how people in China eat rice, and people in Italy eat pasta. The two groups of orcas don’t interact with each other at all. Spencer has seen resident and transient pods swim right by each other with no interaction. No interbreeding has ever been documented. It is almost like they are a separate species. Aside from having separate cultures, biologists have also noted different “languages” between the two groups. Spencer says he hears a difference in the calls of the resident whales vs the transients.

Unfortunately the decline in Chinook salmon in Puget Sound is causing a decline in the southern resident orca population. The NOAA has established a Chinook salmon recovery plan, but progress has been slow-going. Meanwhile, transient populations (marine mammal-eating) seem to be increasing. You can find out more about the Southern Resident Killer Whale Chinook Salmon Initiative and donate to help here.

The tour ended at sunset, and it was a great time. I’d recommend Legacy Charters for whale watching in the San Juan Islands over many other tour groups due to the small boat experience. Going in a small boat with a maximum of around six passengers gives you a more intimate experience with the whales, and an opportunity to ask questions and learn more from the guides.  Also, the large boat tours leave out of Friday Harbor on the east side of San Juan Island, and the whales are normally seen on the west side. Leaving from the west side at Snug Harbor gives you more tour time and more wildlife viewing opportunities. I would strongly recommend bringing a car to San Juan Island, however if you don’t have a car with you Legacy Charters can help arrange transportation from Friday Harbor to Snug Harbor and back.

I would also recommend a visit to the Whale Museum in Friday Harbor before you go whale watching in the San Juan Islands if time allows. It is a great museum with tons of information on the whales in the area and will help you understand more about these beautiful creatures before you see them in the wild.

Also, don’t forget to make your ferry reservations in advance!