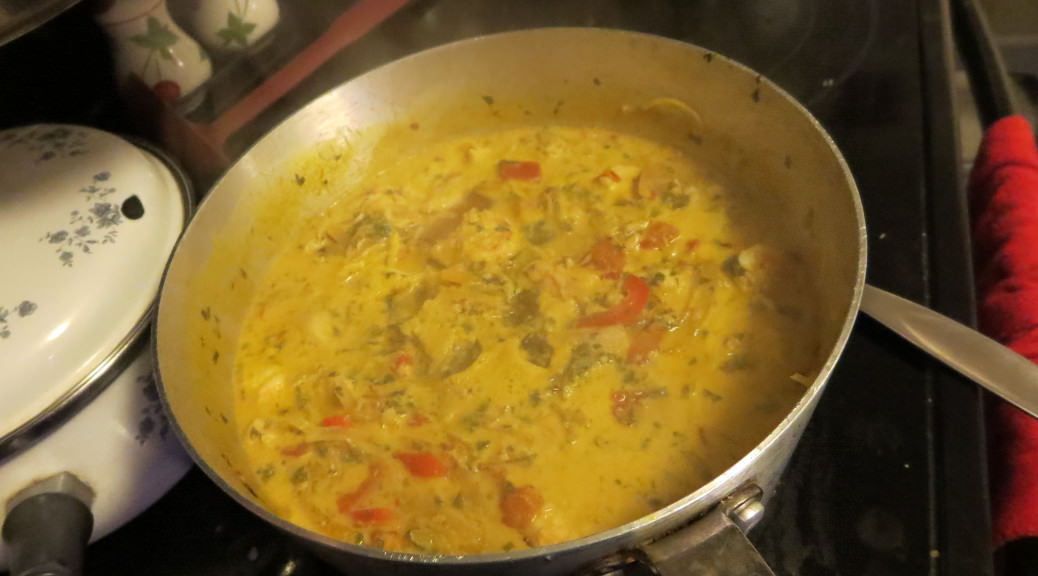 We were watching an episode of Anthony Bourdain’s Parts Unknown about Salvador de Bahia in Northeastern Brazil, and started drooling over all the food he was eating. We have always wanted to go to Brazil. We were having some friends over for New Years Eve dinner, and I ditched my original fondue plan in favor of a Brazilian feast. I cooked several dishes, but the Moqueca (Brazilian Fish Stew) was my favorite.

I found my moqueca recipe on Pinterest from a cooking blog called What’s Gaby Cooking. Her photos are way prettier than mine–I was rushing to get dinner ready for 10 people and didn’t have time to take pretty pictures. I guess you get the reality pictures.

Here is her recipe–it’s super easy. The only oddball ingredient is red palm oil. I found it at Whole Foods, which is usually sure to have oddball ingredients. I’d never cooked with it before but I really liked it. It has a sweet smell and unique flavor to it and turns everything a bright golden yellow.

**I also used pureed ginger in a tube as opposed to mincing fresh ginger, which many grocery stores sell near the fresh herbs in the produce section.

The first thing you have to do is make a marinade for your fish. I used shrimp and mahi mahi like she suggested but I think that cod, halibut, or any other firm fish would work as well. Make sure to use raw shrimp.

Once the fish is marinaded, the rest of the moqueca is a breeze:
Ingredients for the Stew:
Directions:

The moqueca turned out amazing, and was a hit at our dinner party. The flavors of fish, lime, and the herbs really stand out. I have no idea what the moqueca tastes like in Bahia and how close this recipe is, but we plan to find out someday.