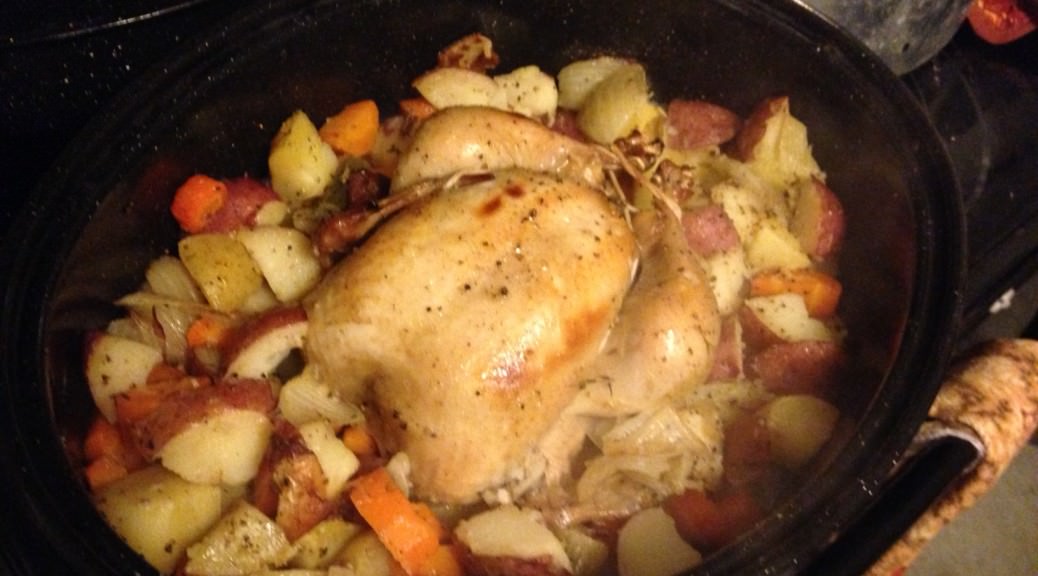 I got this recipe out of a magazine a couple years ago, and unfortunately the page I tore out of it has no indication which magazine it was. It is my favorite fall/winter roast chicken recipe now.

**Before you get started, note that this is a two-day recipe as you need to prepare the brine and brine the chicken in the fridge overnight for cooking the next day.

I did modify the recipe a tiny bit. The original roast chicken recipe called for a whole cup of kosher salt for the brine, but it ended up being pretty salty. A friend of mine who tried the recipe thought that was way too much salt and made it with half a cup instead, which is what I use now. It is plenty of salt.

The recipe also recommended marinating the vegetables in salt, pepper, and olive oil in the fridge overnight as well. I tried it the first time, but I really don’t think it’s necessary. There is a lot of fat in the chicken that flavors the veggies so I don’t think a lot of olive oil is needed. I put them in the roasting pan with a tiny bit of olive oil, salt and pepper (just enough to lightly coat the veggies and help the salt and pepper stick).

**You will also need kitchen twine and a large roasting pan.

Directions: 

1. For brine, in an extra-large stainless steel pot combine the kosher salt and brown sugar; stir in apple juice, water, and mustard. Cook and stir over medium high heat until salt and sugar are completely dissolved. Remove from heat and cool to room temperature. 

2. Remove giblets from chicken, rinse inside and out with water. Place chicken in stockpot, making sure it is immersed in the brine. Chill for 12 hours or overnight. 

3. Once chicken has brined, preheat oven to 400 degrees. Remove chicken from brine and discard brine. Pat chicken dry inside and out with paper towels. Sprinkle chicken cavity with salt and pepper. Place orange halves and four springs of the thyme in cavity. Skewer neck skin to back, tie up legs and tail with kitchen twine. Twist wing tips under back. Spread vegetables around chicken evenly in roasting pan. 

4. Roast chicken for 1.5 to 2 hours, or until a meat thermometer inserted into center of an inside thigh registers 180 degrees. We put the lid on the roasting pan for the first hour or so, and then take it off. Remove roast chicken and vegetables, let stand 10-15 minutes before carving. 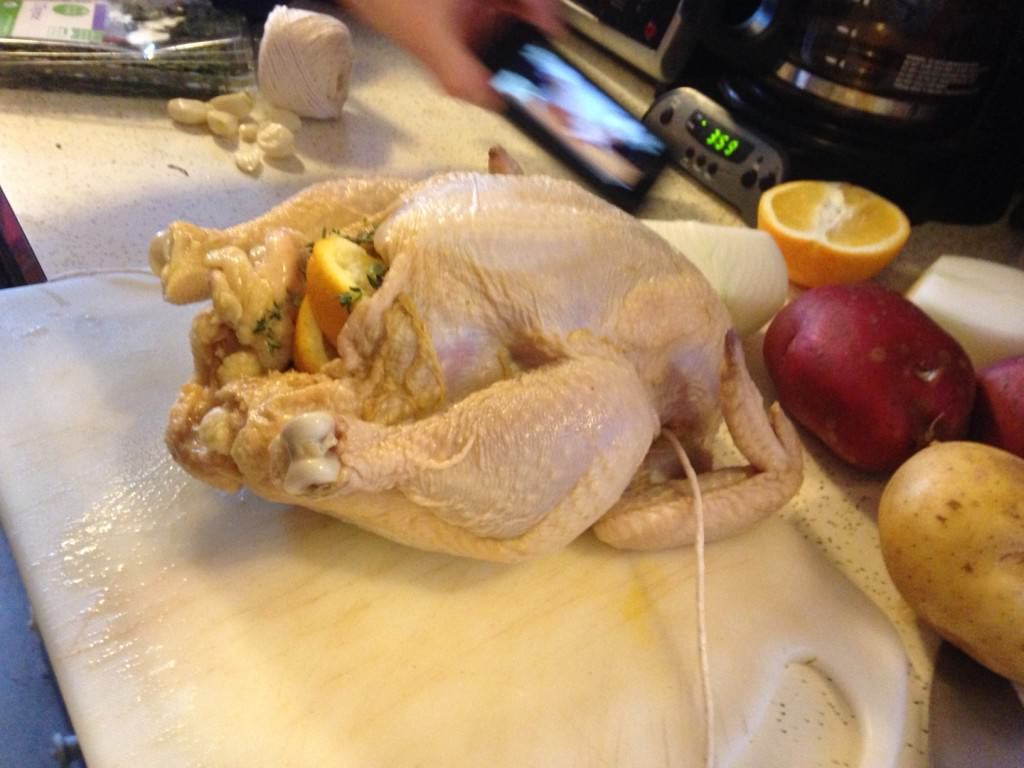 I always let Paddy truss the chicken, he’s the pro. If you’re not sure how to do it, here is a good instructional video I found on YouTube:

We arranged the veggies in the pot around and underneath the roast chicken, so that the juices would flow down and flavor the vegetables. 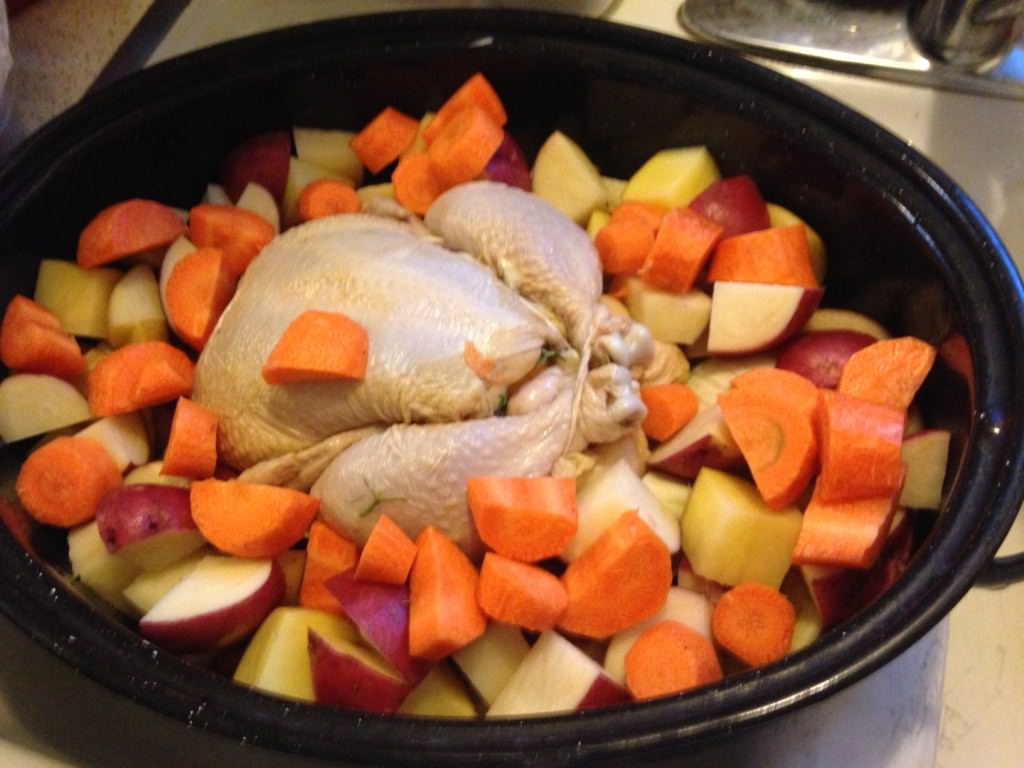 A satisfying meal for a cold winter day. 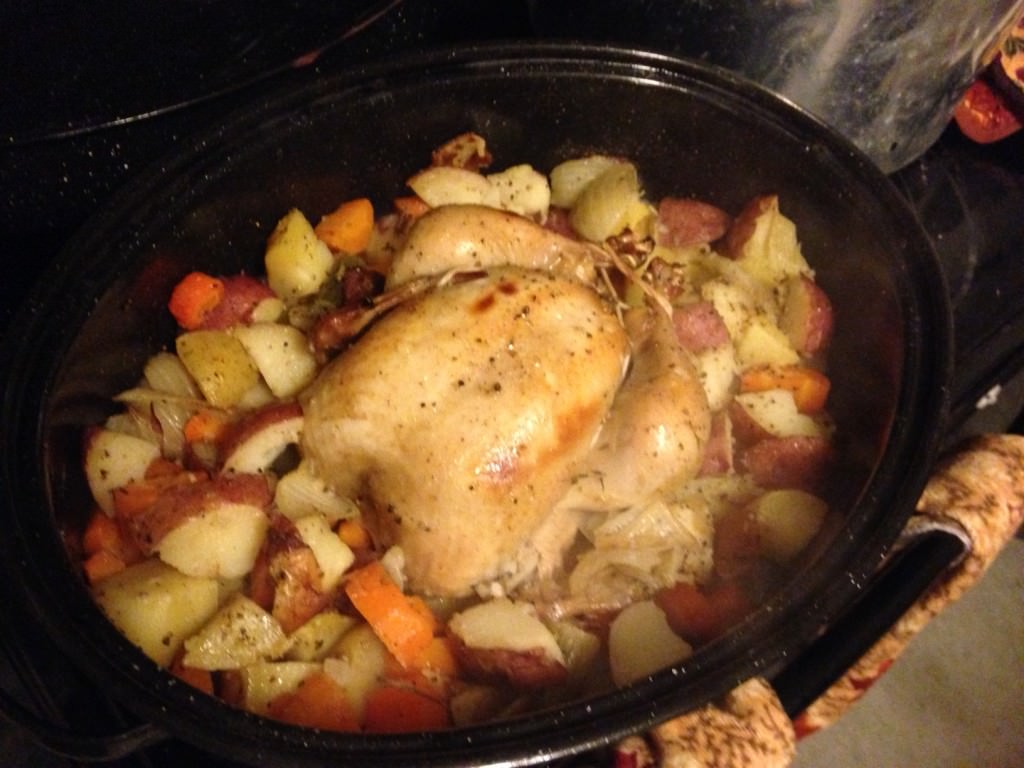