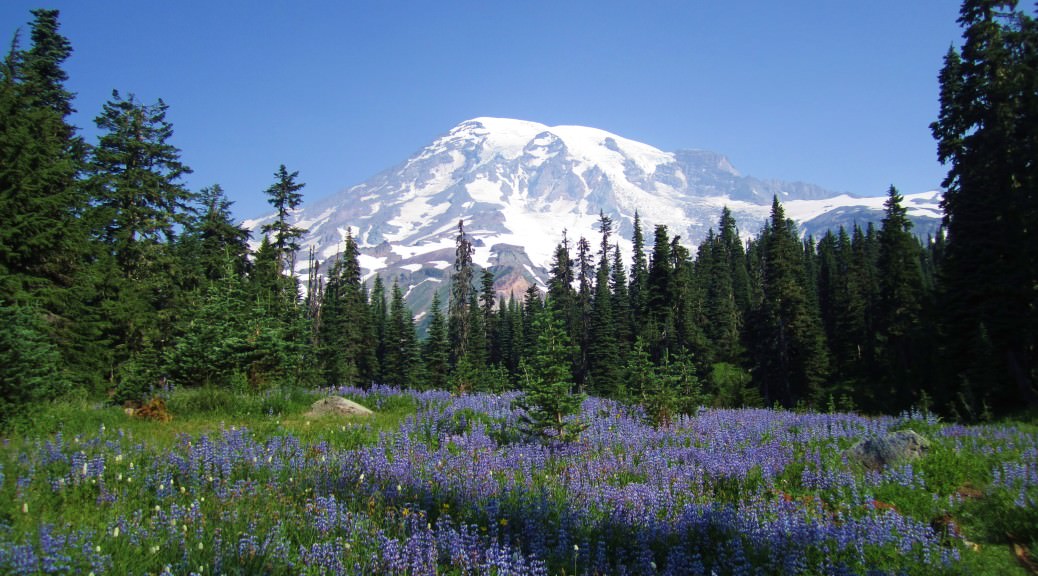 We have both grown up and lived most of our lives in Western Washington, but neither of us had ever been to Mount Rainier National Park. I know, WTF, right? I have visited all but one of the national parks in Utah, as well as National Parks in Hawaii, California, Arizona, and New Mexico, but haven’t been to the most popular national park in my own home state. It was downright shameful.

We both love to camp (as long as we can bring all our gear, park at the campsite, and have a cooler full of food and beer), and it had also been a couple years since we’d had a free summer weekend to go camping. One nice thing about Mount Rainier National Park is that you can make reservations in the two most popular campgrounds, Cougar Rock and Ohanapecosh. The season runs from late May through September.

The bad news: you have to make reservations months in advance to get a good site. There are always cancellations though, so it’s always worth a shot.

The good news: There are other national forest campgrounds around the park that take reservations as well, and often have spots open throughout the summer. You can find and reserve a site easily at www.recreation.gov.

If you don’t like reservations and want to show up and find a site, be warned that this can be a wild goose chase in July and August. We’ve been burned trying to do this before (had to turn around and drive home at 10:00 PM after an exhaustive and unfruitful search near the North Cascades), so we like to make a reservation in advance and pick out our site.

We found a site at Big Creek Campground in the Gifford-Pinchot National Forest, just outside of the southwest corner of Mount Rainier National Park and booked it.

We left work a little early in the afternoon, but still ran into the grueling Friday weekend traffic on I-5, then through Puyallup and South Hill. We made it before dinner, though and promptly unpacked the beer and the bug spray.

After setting up camp, Paddy started a fire and I went exploring the campground. It had pit toilets and a water spout, and firewood for sale at the campground hosts’ site. Be sure to bring all your supplies with you or pick them up along the way–the nearest store is a bit of a drive.

I found a trail at the end of the campground loop and followed it for a ways. It was a nice walk, but I didn’t want to try to find out where the end of it went that night so I turned around.

For dinner we had our traditional “first night at camp” meal: hot dogs, baked beans, and corn on the cob. 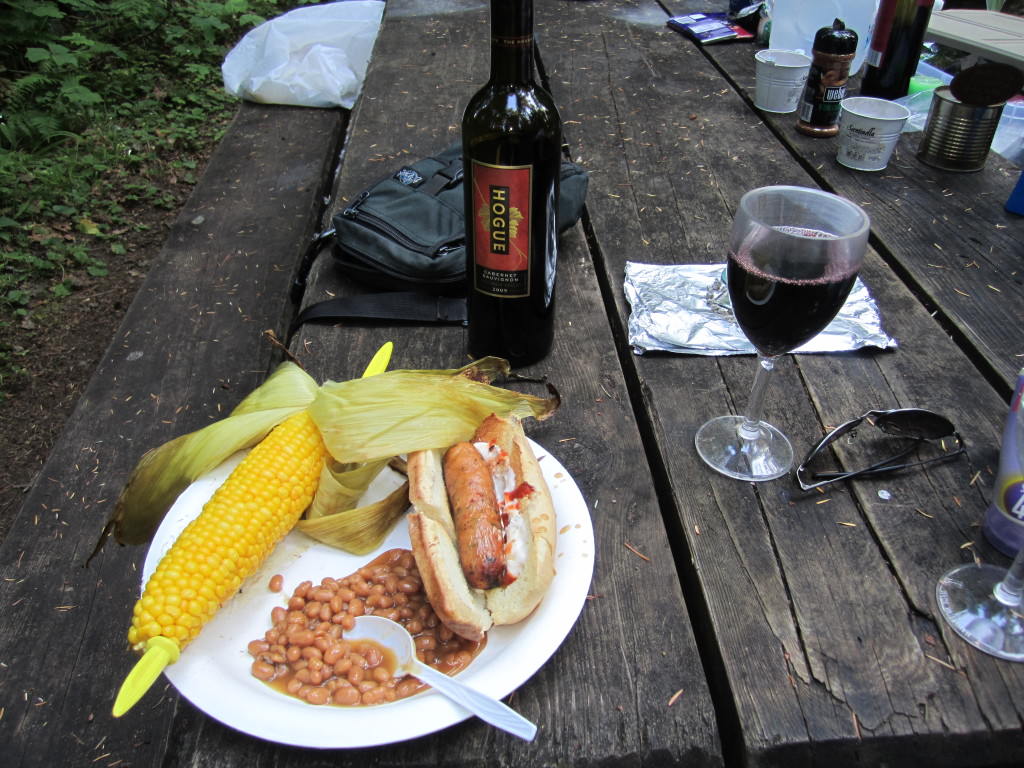 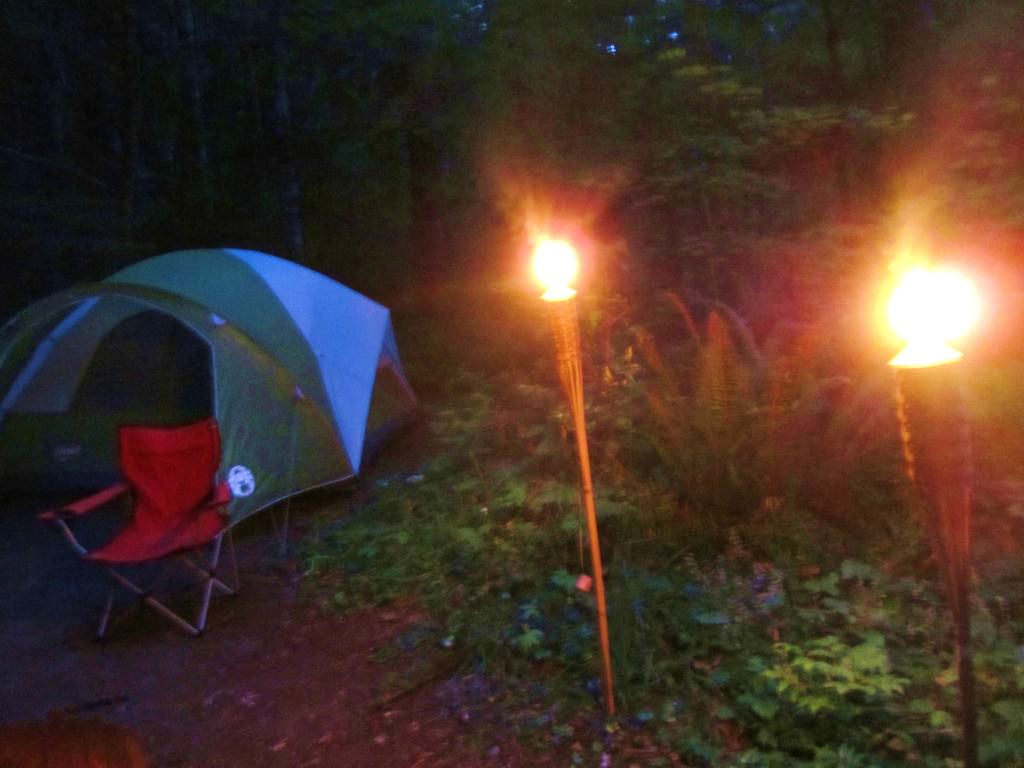 **Tip: tiki torches with citronella oil help keep the mosquitos away, and provide nice light and ambiance for your camp site.

The next morning, we set our alarm for 8:00 AM, made some granola and coffee, slathered on the sunscreen, packed a lunch, and headed up to Paradise.

We paid our entrance fee of $15.00/vehicle at the edge of the park, then began the long and winding (yet beautiful) climb up the mountain.

Paradise is the most popular part of Mount Rainier National Park and the busiest visitor’s center, especially in July and August. I had read that if you want a good parking spot, get up early. The parking lot was already filling up when we got there around 9:00 AM. We parked in the lower parking lot and started up a trail towards the visitor’s center. The views on this trail were already spectacular. It was summer and the wildflowers were in full bloom.

We made it to the visitor’s center which was nice, but didn’t have a lot going on. Some informative maps and information, a small snack shop, and a gift shop.

I had chosen what I thought (and my guide book said) was a very easy hike. It was the Alta Vista Summit hike from my “Best Easy Day Hikes: Mount Rainier National Park” book. It said it was a 1.6 mile lollipop trail, with minimal elevation gain. Should be a piece of cake.

1. Paradise is at a very high elevation

2. All the “minimal elevation gain” on the Alta Vista hike happens all at once, and is 750 feet.

Within seconds we were both winded, and my legs felt like they weighed 100 lbs each. The hill was extremely steep, and the thin air had us struggling for oxygen–especially me. We were determined to get to the top, which was the top of the “lollipop” hike. The rest of it continued around a small loop. We caught our breath and enjoyed the view.

The views were pretty awesome where we were, and we decided to just head back down and continue on to the next part of the park at a lower elevation. I’d really like to come back and try it again sometime though.

We left Paradise at 11:00 AM, and cars were already lining the side of the road down from the visitor’s center for several miles.

We continued on the 706 highway through the park and down Stevens Canyon Road until we reached the Grove of the Patriarchs trail. It is another lollipop trail through an old forest of 1,000 year old trees including a suspension bridge over the Ohanapecosh River. It has virtually no elevation gain, and is only about a mile and a half round trip.

We ate a quick lunch on the tailgate of our truck and then headed out on the trail.

Because the trail is so easy, it’s popular with families and can be really crowded. It was nice, but a little too easy and a little too crowded. It made a nice wind down though after the extreme elevation hiking of the morning. The suspension bridge is pretty cool though, and the ancient trees are pretty amazing.

On the way back to camp, we stopped off at a viewpoint over Reflection Lakes on Steven’s Canyon Road. There is a loop trail around the lakes here that I would really like to come back and hike sometime.

That evening we enjoyed another meal cooked over the campfire, wine in plastic wine glasses, and some music on our emergency radio. It was nice.

The next morning we stopped in for breakfast just outside of the park in Elbe at the Mount Rainier Railroad Diner. Breakfast was good, and you get to eat in an old train.

We totally fell in love with Mount Rainier National Park on this trip. We will be back many times, I’m sure.