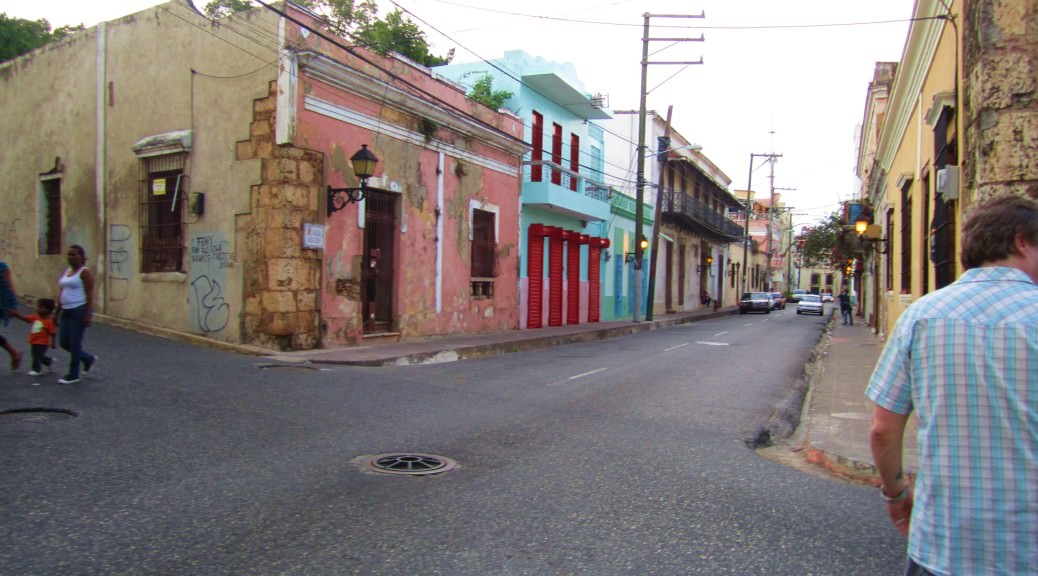 Most people go straight to the resorts in Punta Cana when they visit the Dominican Republic, and they are missing out on almost everything great about the country itself. There is more to the Dominican Republic than pretty beaches. We spent our first two days in the capitol city of Santo Domingo, and we wished we had more time there. We were lucky enough on this trip to meet up with some locals to take us to their favorite restaurant and show us some local nightlife.

We arrived in Santo Domingo from a night flight around 11:00 AM, withdrew some pesos out of the airport ATM, and met our shuttle driver in ground transportation. He was very friendly and we made conversation as best we could with his limited English and our limited Spanish. He dropped us off at the Hotel Frances, a beautiful hacienda-style hotel in the Colonial quarter of Santo Domingo. The hotel building itself dates back to the 16th century Spanish colonial days. Our room was on the ground floor with a door opening to the courtyard restaurant.

We were exhausted and promptly drew the shutters and crashed for a couple hours. Around 3:00, we forced ourselves to get up, shower, and go out. We walked around the colonial quarter, still exhausted, and decided some caffeine was in order. We found a little cafe on the main shopping street of Calle del Conde with outdoor tables, and sat and had some cappuccinos. It was good people watching, and about all we could muster for the moment. After a good sit and some great cappuccinos, we went back to the hotel to get ready for dinner.

**Tip regarding clothing: Dominicans don’t often wear shorts, so tourists wearing shorts will stick out like a sore thumb. Also, shorts are often not allowed in upscale restaurants or night clubs. Jeans are way too hot, don’t bring those. Paddy has some linen pants that he wore out at night that he loves. (Shorts are totally acceptable at the beach, just make sure you have some pants for going out to dinner).

Our guidebook strongly recommended Meson de Bari, which we later found out was also featured on Anthony Bourdain’s No Reservations. The atmosphere was colorful and lively, and the service was great. Unfortunately, we ordered the wrong things and they were a bit bland. Stick to the house specials of stewed goat or crab, or lambi (conch) empanadas. Outside of the house specials, the food seems to be a little on the drab side. We recently watched the No Reservations episode, and whatever Tony was eating looked a lot more interesting that what we ordered, which was shrimp and beef with creole sauce. If we make it back to Santo Domingo, we will totally be giving this place a second chance.

After dinner we had a few drinks at the bar in our hotel, which was a tiny little bar off the corner of the courtyard. If we’d had more time in Santo Domingo, I would have liked to have dinner at the hotel courtyard restaurant. It was dimly lit and romantic. The entire atmosphere of the Hotel Frances was upscale and historically charming. I would definitely recommend it.

After a good night’s rest, we were ready to go out and actually see some stuff. We headed down to Calle del Conde and found a little cafe on the edge of the Parque Colon, a square named after Christopher Columbus. The park features a nauseating late 19th century statue of Columbus, with a naked Taino slave girl worshipping at his feet. Santo Domingo was the first successfull Spanish settlement that Columbus established in 1496, and the oldest continually-inhabited European settlement in the Americas. The settlement was then governed by  Nicolás de Ovando from Spain during 1502-1509, during which the native Taino population was brutally decimated down to roughly 12% of what it was when Columbus arrived.

We ate breakfast outdoors in the shade and watched several groups of cruise ship tourists walk by with cameras, shorts, and socks with sandals. Breakfast was standard American fare and a very tasty Spanish omelet (“tortilla”). The Dominican coffee was dark and delicious.

After breakfast, we explored the colonial quarter. It was interesting to see old Spanish-style buildings from the 1500’s here in North America. That’s definitely not something you see on the US west coast.

Up the hill from our hotel were the ruins of El Monasterio de San Francisco. It was constructed in 1508, suffering setbacks of hurricanes and later earthquakes in the 1600’s and 1700’s. It later became a mental hospital in the 1880s (I can only imagine what that entailed….my guidebook said that some of the shackles that patients were chained up with are still attached to the walls). Another hurricane severly damaged the building in the 1930’s, and it has been in ruins since.

Down the street from the ruins of the Monasterio de San Francisco are the ruins of the Hospital San Nicholás de Bari, constructed in 1503. It survived many hurricanes and earthquakes, but finally succumbed to a hurricane in 1911.

Next, we visited the Fortaleza Ozama, a Spanish castle built in the 1500’s overlooking the Ozama River. It is the oldest European military building in the Americas, and weathered the natural disasters better than the hospital and monastery. The building served as a prison in later years until the 1960’s.

We bypassed a random guy asking us for money for a tour (the site is free) and did our own tour.

We were getting hungry, so we made one last quick stop at the old church in Parque Colon.

For lunch, we went to the El Conde Hotel restaurant on the corner of the Parque Colon. It was busy, with shaded outdoor seating and indoor seating. We had some American-style sandwiches, lemonade, and Presidente beer.

After lunch, we did a little shopping on Calle del Conde and ran into a small parade. It almost seemed impromptu, as it was really small and no one was lined up along the streets watching it. It was a nice surprise. We asked a local what it was for and were told “spring.” 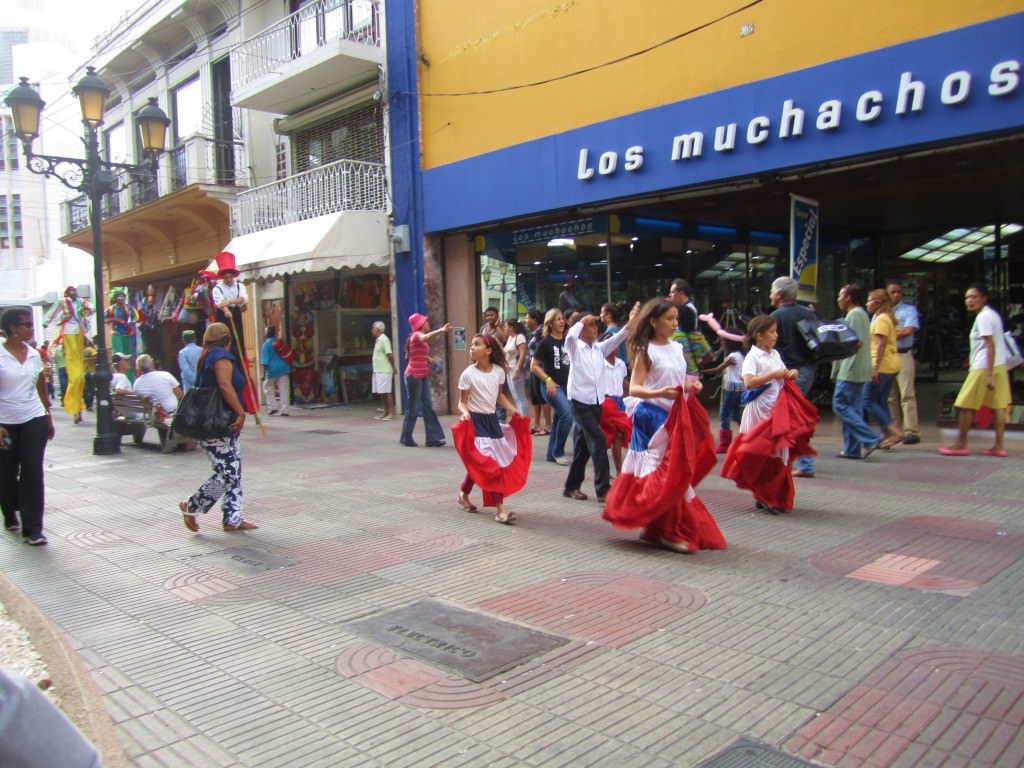 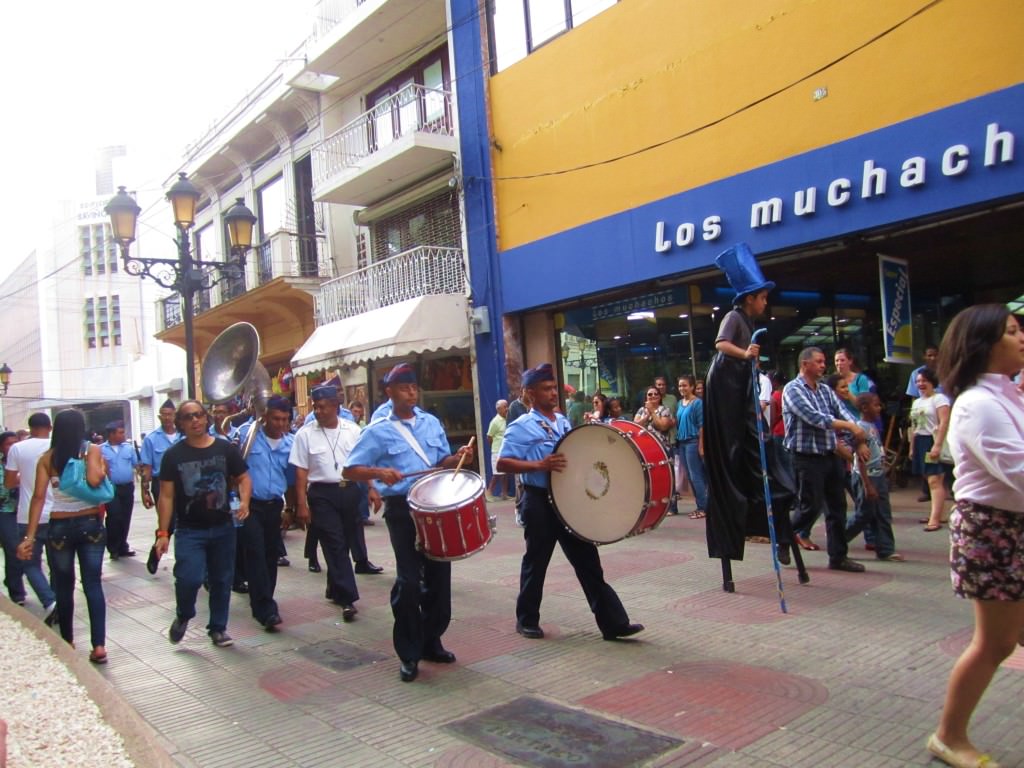 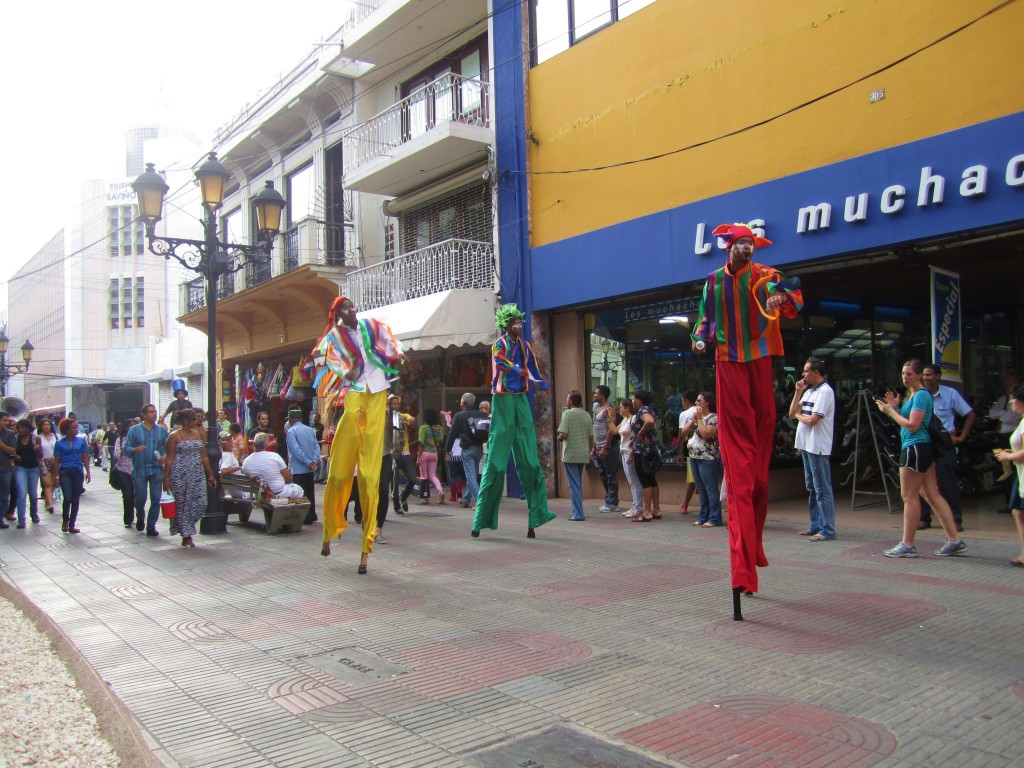 When I was an exchange student in Denmark in high school, one of my closest friends was a fellow exchange student from the Dominican Republic, Ramses. Ramses had moved to Colombia a few years prior to our visit, but hooked us up with his younger sister Stephania and his mother Violeta. I got in contact with them before our trip and they were more than happy to show us around for the evening.

Stephania and Violeta picked us up at our hotel and we went to the restaurant that Ramses said we absolutely HAD to eat at, Adrian Tropical. It is a Dominican restaurant featuring the popular Dominican dish, the mofongo. The mofongo is a dish made up of fried plantains, pork cracklings, broth, garlic, and other lovely items mashed up together with a mortar and pestle. If you go to the Dominican Republic, your trip won’t be complete unless you’ve had one. They are delicious and they seem to be the favorite food of every Dominican I’ve ever met. 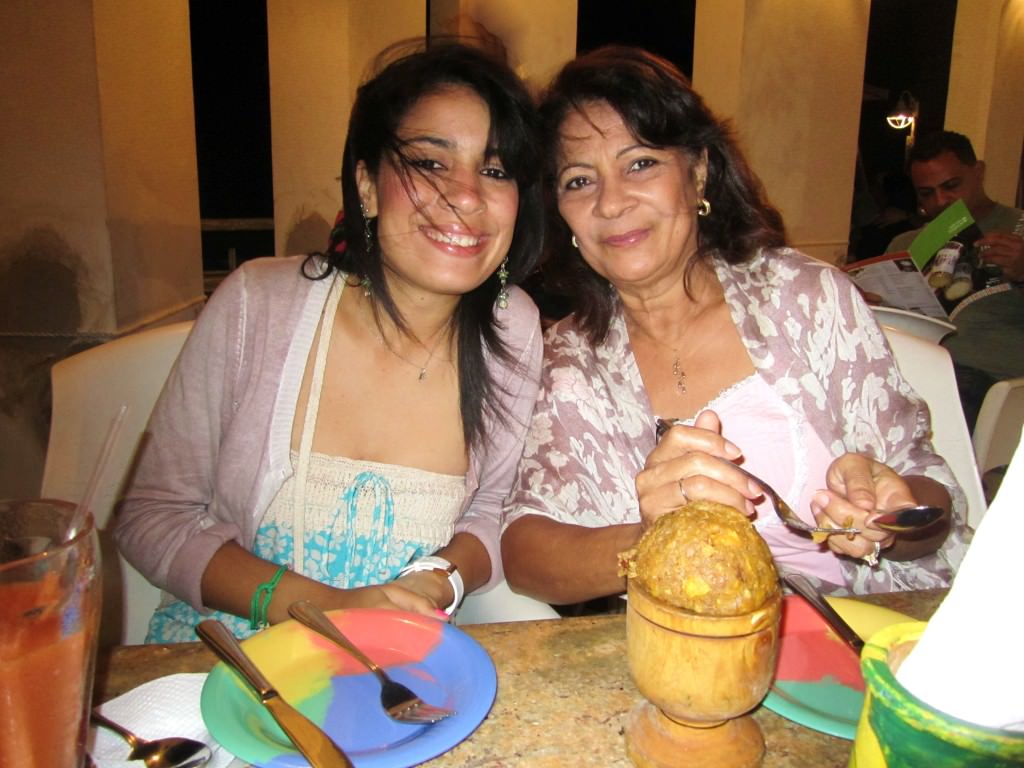 I had the shrimp mofongo, called the “camarofongo.” It was also delicious.

After dinner, it was a special night in the colonial zone and all the museums were free and open until late. We had a difficult time finding parking on the tiny streets, and when we finally found a space the museums were closing. Stephania and Violeta sweet-talked the man at Alcázar de Colón into letting us in really quick before they closed. Alcázar de Colón is the former home of Diego Columbus, Christopher Columbus’ son.

After the museum, we walked across the square to El Patio del Canario, a bar owned by a local salsa music star. It is a tiny bar, and super charming. We got to see some locals dancing merengue which was quite impressive. Violeta tried to teach me some salsa dancing, not sure how well I did. The Presidente beers were frosty cold. They drink their beer colder in the Dominican Republic than anywhere we’ve ever been to. They come with a layer of white frost on them, and are said to be wearing a  “vestida de novia” or wedding dress. It was a hot night and that beer couldn’t have tasted better.

We called it a night around 1:00 AM and thanked Violeta and Stephania for a great evening.

The next morning we had a very nice (albeit expensive for Dominican standards at $15/person) breakfast in the Hotel Frances courtyard. It was worth it–there were a lot of options, eggs cooked to order, and a beautiful courtyard to sit in. 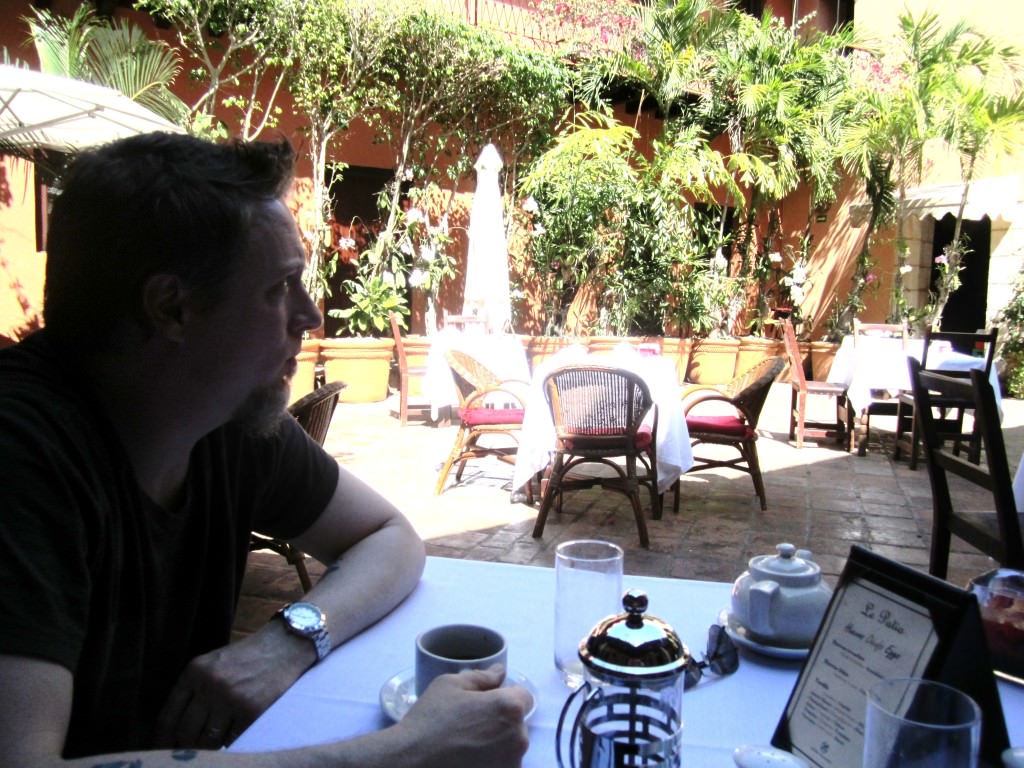 After breakfast, we caught a shuttle to the town of Bayahibe to continue our Dominican adventure. Overall we felt like we just got a small taste of Santo Domingo, and really wanted to see more. If we make it back, we’ll spend more time exploring the capitol city. If you are considering a trip to the Dominican Republic, I would highly recommend making Santo Domingo part of your visit. You can even fly into Santo Domingo and out of Punta Cana, or vice versa if you want to see both.