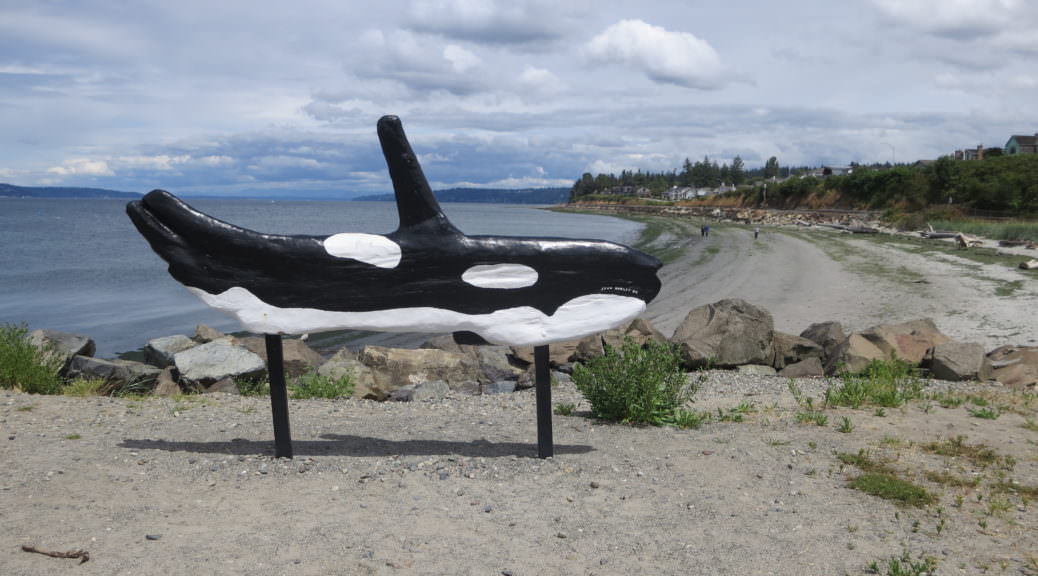 Edmonds, WA: beaches, a farmer’s market, a quaint little town, a tiki bar, a wedding, and some delicious dim sum.

Some good friends of ours were getting married at the Edmonds Yacht Club in Edmonds, WA, a small waterfront town just 30 minutes north of Seattle. Since we now live in South Seattle, it was kind of a long way to cab and we wanted to be able to have a good time at the wedding, so we decided to get a hotel room at the Edmonds Best Western and make a weekend of it.

Paddy grew up in Edmonds, living there from birth to age 14. He said it was a nice little working-class small town when he lived there in the 1970’s, but it has since gentrified considerably. Now there is a lot of money in Edmonds, with a lot more upscale shops, bars and restaurants. We decided to play tourists for the weekend and check out the town while Paddy took a walk down memory lane.

We arrived in Edmonds at about 1:00 PM on Saturday, and located the Best Western. They had a solid 3:00 PM check in time, as they were fully booked that night and the housekeeping staff had their work cut out for them. We were able to check in without getting the room keys, and were given a parking pass so that we could leave our car in the lot while we walked around.

My only previous interactions with Edmonds were to purchase my wedding dress back in 2009 (at a fabulous and reasonably priced bridal boutique called Cynderellie’s Closet which is sadly now closed), and to get on the ferry to Kingston on the Olympic Peninsula.

We walked down to the beaches by the ferry dock and soaked up the sunshine a bit. The beaches are nice, with public bathrooms and changing areas and an outdoor shower.

There were a lot of divers at the beach, getting ready to dive or coming back from a dive off the shore. We learned that Edmonds is a very popular spot for divers, as it has an underwater park right next to the ferry dock with ship wrecks and “trails” made by ropes that divers can follow to explore the park.

Paddy and I have never learned to dive, but we’ve considered it. Maybe we’ll get certified and check out the park someday. It sounds really interesting.

In addition to the ferry to the Olympic Peninsula, Edmonds has a train stop for Amtrak and the Sounder weekday commuter train, making it very easy to get to other places in Washington State and British Columbia, Canada without a car. The train station is also close to the ferry and waterfront.

After a short time enjoying the beach, we headed up Main Street to the Edmonds Farmers Market, which happens on Saturdays from May through September. The farmer’s market was pretty large, with vendors selling all kinds of local crafts, fruits and veggies, and artisan foods and baked goods. We sampled some delicious local peaches.

We left the farmers market and explored the downtown area. Paddy was reminiscing about is childhood. A lot had changed since he was a kid, but he was happy to see that the bakery that he used to get a free cookie at when he was little was still there.

For lunch, we weren’t starving but wanted to check out A Very Taki Tiki Bar, as we are tiki bar enthusiasts.

Full disclosure: I’d actually eaten lunch here with a friend seven years ago after trying on wedding dresses, and it was terrible. I had ordered a Caesar salad with a seared ahi tuna filet and the tuna came not seared, but overcooked to the point of a tough pasty cardboard texture. However, since seven years had passed and this place was still open, and the Yelp and Tripadvisor reviews weren’t terrible, I wanted to give it another shot. Maybe they were having problems with an untrained cook back then.

The menu was a mix of average pub grub, more burgers and Mexican dishes and appetizers than Polynesian. We decided to share an order of the mahi mahi tacos, Paddy had a beer and I ordered the Taki Tiki Torch drink, which was Strawberry Stoli vodka muddled with lime and lemon juice, strawberry puree, and jalapeno. It was sufficiently tasty, but for $8.00 I expected at least a slight buzz. I don’t think there was a lot of alcohol in it.

The mahi mahi tacos were average, the fish was cooked okay and they were tasty. Not tacos I would make a point to come here for, but alright. The tiki decor was fun, a lot of nautical decor and Mexican beer advertisements. Overall, however, it wasn’t my favorite tiki bar. I think we’ll skip it next time we come to Edmonds.

After lunch we poked around in a few of the shops in the main part of town. Our favorite gift shop that we found was Treasures & Teas, which had a lot of fun nautical gifts including a few tiki  items. If you’re into nautical/beach-theme decor, pirates, mermaids, or anything related to the sea for your house (or are looking for a gift for someone who is), this is a good place to shop.

We went back to the Best Western at 3:00 to get ready for the wedding. Our room was on the ground floor, not the best room in the hotel but nice enough. The bed was comfy. There was complimentary hot breakfast available in the morning, and a small outdoor pool and jacuzzi that we didn’t have time to make use of.

The wedding at the Edmonds Yacht club next to the harbor was beautiful, and we had a lot of fun.

A group of us ended up at the Channel Marker pub after the reception for a night cap, a divey little spot in a strip-mall type building in between the Yacht Club and the Best Western. We ordered some jo-jos and tater tots to soak up the booze, had some last drinks and then called it a night around 1:00 AM.

T&T Seafood is one of the best spots for dim sum north of Seattle. It is authentic and delicious, and very affordable, not to mention GREAT hangover food. Tons of dumplings, sweet and savory pastries, congee, chicken feet, sticky rice with pork in tea leaves, sauteed veggies and noodles, and various dessert items such as sesame mochi with red bean paste.

If you’ve never been to dim sum before, it’s fun. You sit at a table with a card, and servers come around with carts of various small plates and you can choose what you want off of the cart. There is usually a steamed dumpling cart, a fried dumpling cart, and a baked dumpling/pastry cart. There was also a congee (Chinese savory rice porridge) cart coming around here as well.

The server marks the plates you take on your card, and you pay at the cashier at the end. Everything on the card is in Chinese, and we have no idea what the prices are, but we always seem to leave stuffed for under $30 for the two of us.

There are a few Asian markets nearby as well, the largest of which is Ranch 99. It’s not as good as Uwajimaya in Seattle’s International District, but it has most of the same types of foods.

I don’t think we would have ever stayed in Edmonds had it not been for our friends’ wedding, but it was fun to be tourists for a weekend and Paddy had a good time reminiscing about his childhood and seeing how things in the town have changed. It’s a cute little town, and from a tourist prospective it seems like a good home base/transit point to the Olympic Peninsula by ferry, as well as Seattle, and cities north all the way to Vancouver BC by train.