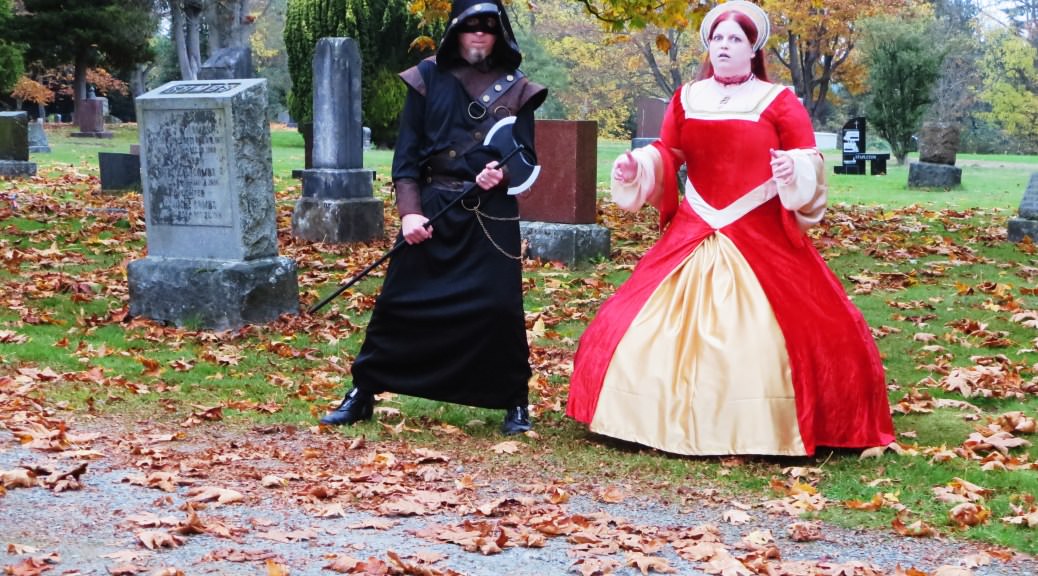 Crafty Adventures: Rediscovering the art of the Halloween costume–crafting great costumes for grown ups with minimal sewing skills and a lot of enthusiasm

Halloween has always been my favorite holiday. Paddy’s favorite too. As a kid I used to count down the days until Halloween, and lay my Halloween costume and all its accessories out on my bedroom floor the night before, so excited to be that character at school the next day. Figuring out what I wanted to be and carefully gathering all the necessary components to my Halloween costume was half the fun.

When I got to high school, I went through a goth phase and Halloween usually involved slapping on a pair of vampire fangs and calling it good. In college I got back into costume planning, but “cute” and “sexy” were often factors in my costume decision, and the vampire fangs came out with every costume (because I had them, and well, they were kind of cool). During my early to mid twenties, Halloween usually involved slapping on a wig or a pair of devil horns with a cute outfit and heading out to a bar (cute and sexy still being major factors, of course).

Paddy told me that he had a few good costumes in his 20’s before we met, but sadly he has no photos to share. He remembers being Jack the Ripper and Uncle Sam. (I think the rest of the Halloweens are a blur…)

In 2008, we decided we wanted to have good Halloween costumes. Batman Dark Knight had just come out, and Paddy really wanted to be the Joker (Heath Ledger style). I decided to be Marie Antoinette, but wanted to do in in a more authentic way, not the pre-fab “sexy Marie Antoinette” Halloween costume way. We bought Paddy a pre-fab Joker costume and scar patches for his face, and swapped out the cheesy polyester tie for a real tie and shirt. His hair was the right length and style, and it looked great.

I found the world’s most hideous bridesmaid dress at Red Light Vintage in Seattle. It was a monstrosity of pink lace and ruffles, with poofy sleeves and a bow on the butt. I feel terrible for the poor woman whose bride friend subjected her to wear such an ensemble.

With the help of my good friend Gretchen, seamstress/crafter extraordinaire, she helped me cut a mountain of lace off the dress and de-poof the sleeves. I got a white corset at Frederick’s of Hollywood for the bodice, and used an old crinoline to poof out the skirt. I sewed pink and white lace along the edges of the corset for extra pizazz and added a cameo pin to the center.

Paddy and I both went through an atrocious amount of colored hairspray. I put a ball of yarn on my head and pinned my hair up around it to create a wig-like pouf. In retrospect, a wig would have probably been the way to go, seeing as how Marie Antoinette actually wore a wig as well. I think we also should have gotten Paddy a real jacket and vest, but funds were tight. Overall, we were pretty happy with it.

We went out to a bar that night with friends, and got lots of compliments. There were two other “sexy Marie Antoinette” costumes out that night, but they weren’t nearly as cool. I had forgotten how much fun it was to plan a costume and get really into it. It was fun to be The Couple With The Cool Halloween Costumes. There’s also a certain amount of respect you get–from others who have also put some decent planning and effort into their costumes, and from those who wish they had. From then on, we have stepped up our Halloween Game.

The next year in 2009, we were newly engaged. I had always loved Lydia’s red wedding dress from Beetlejuice, and Paddy had the right haircut that year. I sewed rows of tulle onto a old red strapless dress with the help of my friend Christine (also a sewing master). My costume didn’t come out super authentic, and Paddy made a much better Beetlejuice than I made a Lydia. But we were a hit at the party we went to, and Paddy had fun being in character.

Unfortunately, some years didn’t work out. If I remember correctly, in 2010 we didn’t have any parties to go to (our friends Ian and Jaz took a year off), and we had just gotten married and back from our honeymoon in Tahiti in September, so we didn’t have as much gusto to get into it with the Halloween costumes that year.

We came back in 2011 full force as Jem and an 80’s glam rocker. I had my Halloween costume custom made for me by a woman in Canada on Etsy.com. It was made to my measurements and very authentic. I am a huge Jem fan and was super excited.

In 2012, the company I work for had a software transition in October that went horribly awry, causing lots of overtime and stress for months. Unfortunately, my gumption to create an awesome Halloween costume was gone, and our friends who throw their annual Halloween party had just had a baby and lost their gumption for that year as well.

Still wanting to have a great Halloween, I slapped together a vampire costume and went out with some friends to Carnevolar, the Emerald City Aerialists annual Halloween party and show. It was an awesome show, and a lot of fun. My Halloween costume was so last-minute that I ended up braving horrendous Northgate Mall traffic on the Friday of Halloween weekend and a line wrapping around half the store of Party Display and Costume. Planning ahead is definitely the way to go. My old vampire fangs had disintegrated, and I needed some new ones. I must say, the fangs they have out now are much better than the ones in the 90’s.

Paddy had other plans, so he didn’t end up having a Halloween costume that year.

Last year, we went full force back into Halloween costume creation. I started planning in September, and created an Anne Boleyn (post-mortem) costume. Paddy was the executioner.

This was probably the most effort I’ve ever put into a costume. Researching portraits of Anne Boleyn and the fashions of the era, I needed to come up with a dress with a full skirt and a square neckline, a French hood for my head, and a corset that flattened my bust. Only finding very expensive French hoods for sale on Etsy.com and renaissance costume supplier websites, I googled instructions on how to make one, and found this awesome website with a printable pattern and instructions. I found all the supplies at Joann Fabrics and followed the instructions, and somehow managed to pull it off without screwing it up. I was amazed at myself.

For the dress, I found this dress at a discount online, and widened the skirt by removing the gold panel and replacing it with a larger gold panel with the help of my other seamstress whiz friend Christine (thanks Christine!!). I also cut the neckline lower, and sewed the sleeves to be more in line with the Tudor style, adding a white gauze and lace under-sleeve.

I had a really hard time finding a Tudor-style corset (as apposed to Victorian hour-glass style) that would flatten my bust as was fashion in the Tudor era. I finally found one that worked perfectly at DraculaCorsets.com.

The last accessory I needed to make the ensemble complete was a pearl necklace with a gold B, just like the one Anne wore in all of her portraits. Fortunately, you can find this made by talented crafty people on Etsy.com.

I had a giant crinoline that I wore underneath my wedding dress, and it was perfect for filling out the skirt. We found Paddy a medieval executioner costume at a Halloween costume store.

We went out twice over Halloween weekend and turned quite a few heads.

I have already begun my costume for this year, stay tuned…