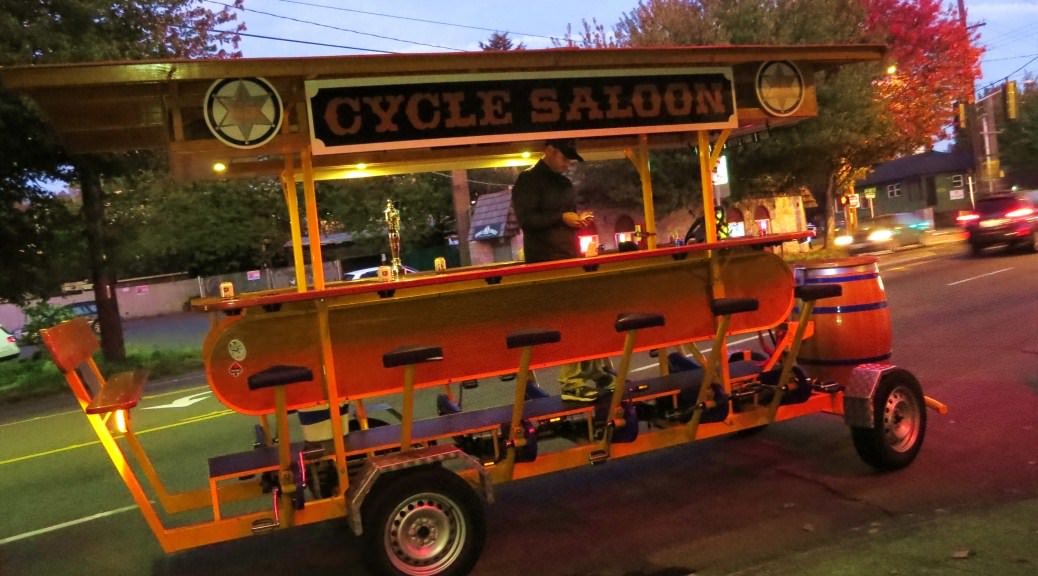 I’d seen the Cycle Saloon around the Fremont/Ballard neighborhood a  few times, including witnessing a cringe-worthy 5 mph drunken peddle across 4 lanes of evening rush hour traffic on 15th Ave NW. You can also guarantee spotting it in Seattle’s infamous Fremont Solstice parade every June, powered by naked, peddling “saloon” patrons amongst the 400 or so naked bicyclists that kick the parade off every year.

I always thought it looked fun, so when our general manager at my work decided that the Cycle Saloon brewery tour would be a good office “team-building” exercise, I was in.

We opted for a two-hour brewery tour on a Thursday night from 5:30 to 7:30, which was $28 per person. They also offer Friday and Saturday night pub crawl rentals for a flat rate of $185/hour. The Cycle Saloon seats up to 14 people, with 6 seats on each side (10 out of the 12 bike seats have pedals) and a bench seat on the end (no pedals). Our “driver” and guide sits up front and steers the Cycle Saloon while staying sober. Everyone else is allowed to drink while pedaling, as you are essentially just the “motor” of the vehicle. The driver controls the breaks.

We brought our own beers to have in the saloon (tour does not include anything but the Cycle Saloon itself and guide), and there was plenty of storage space in the roof rack for bags and beverages. There was also a keg tap which was unused. 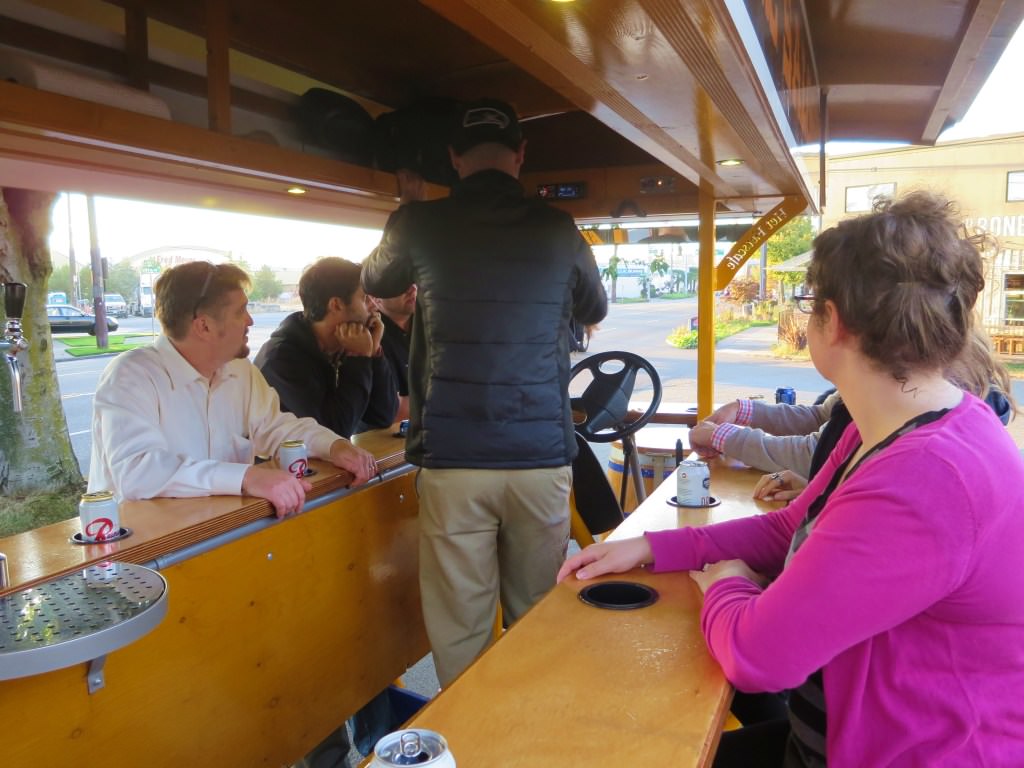 We climbed onto the saloon, and set off down North 36th Street in Fremont and onto Leary Way NW. We only went 5 miles per hour no matter how hard everyone peddled. I’m pretty sure there is something built into the gears to keep the speed controlled at a slow pace. This was to the dismay of several drivers trying to get home, as we blocked an entire lane of traffic on Leary during rush hour. We got a lot of hoots and hollers from pedestrians along the way, as well as a few dirty looks from drivers.

Our first stop was Bad Jimmy’s Brewing Co. which ended up being my favorite. It is located on Leary Ave NW in an old garage next to Bourbon and Bones BBQ, a new BBQ joint that I’ve heard rave reviews about.

Bad Jimmy’s Brewing has a large selection of brews, including some very unique flavors. We ordered a selection of tasters and tried as many as we could. I tried the Amber, and tasted a sip each of the Habanero Amber, the Cocoa Vanilla Porter, and the Strawberry Mango Hefeweizen. They were all delicious. the Cocoa Vanilla Porter was essentially dessert in a glass, but not too sweet. I’d never had anything like it. The Habanero Amber had a kick to it, but wasn’t overwhelmingly spicy. I was told that they had a habenero cider in the summer, and I was kind of bummed that they didn’t have any left to sample. I’m sure they will again, it sounded awesome. The Strawberry Mango Hefeweizen was very fruity and a little sweet. If you’re not a beer drinker, this might be a good one for you.

Bad Jimmy’s also sells growlers to go, I think I’ll have to go back and get a few for our next party.

After a 30 minute stop at Bad Jimmy’s, we climbed back on the Cycle Saloon, peddled down Leary Ave and turned North on 8th Ave NW. 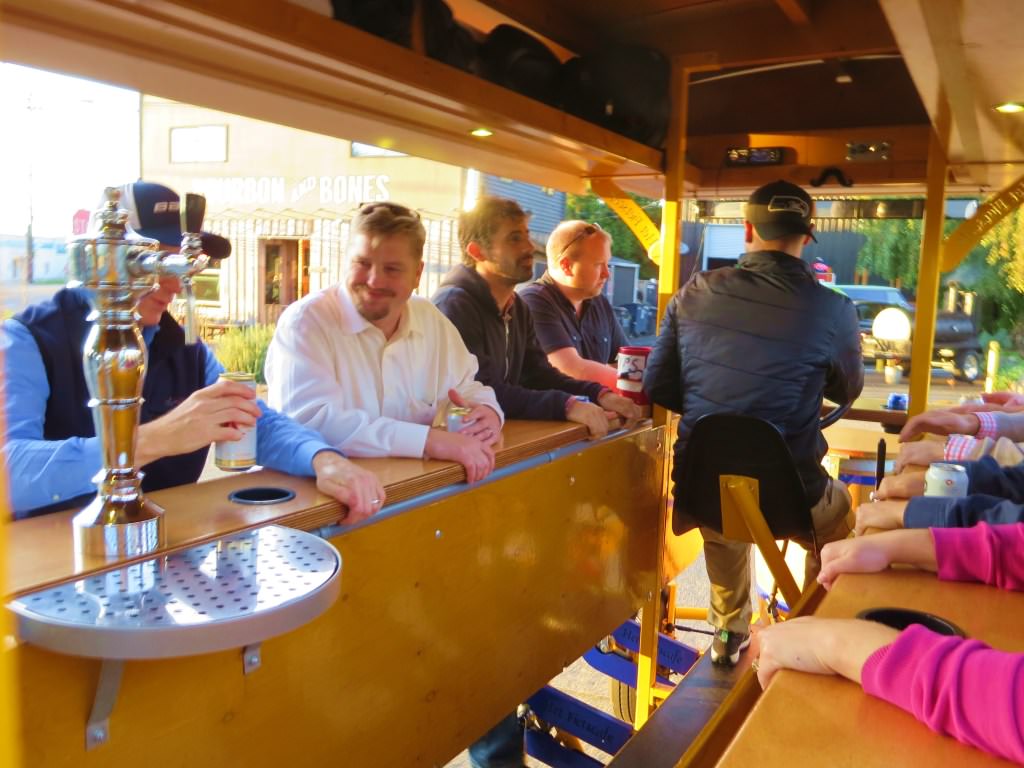 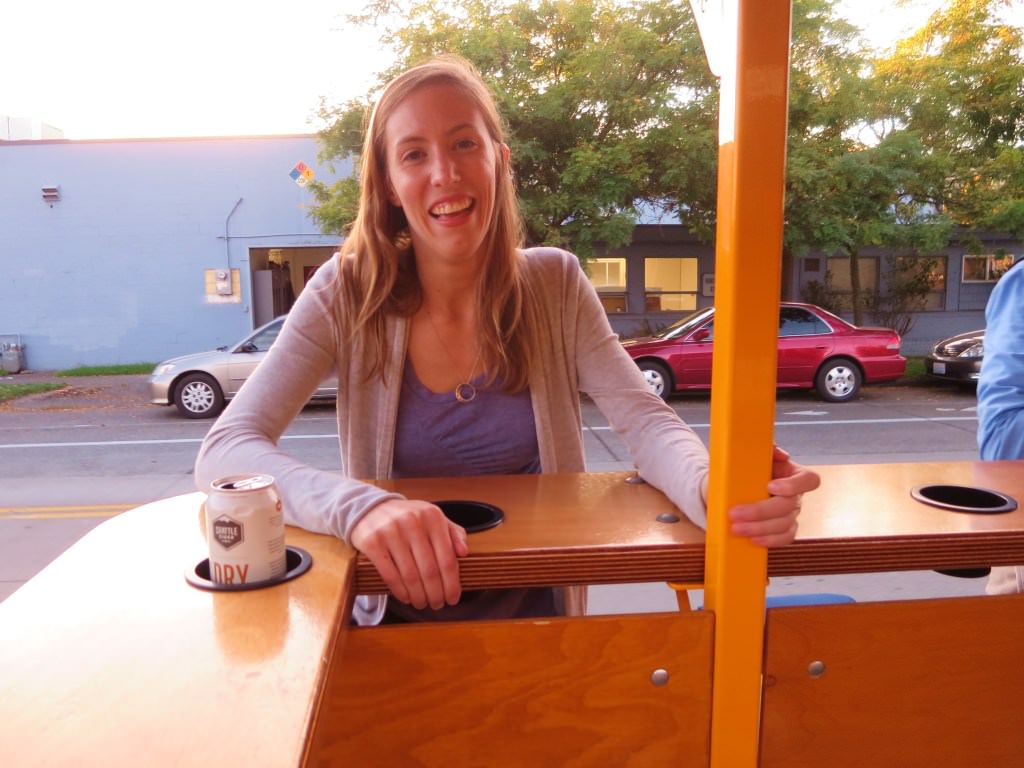 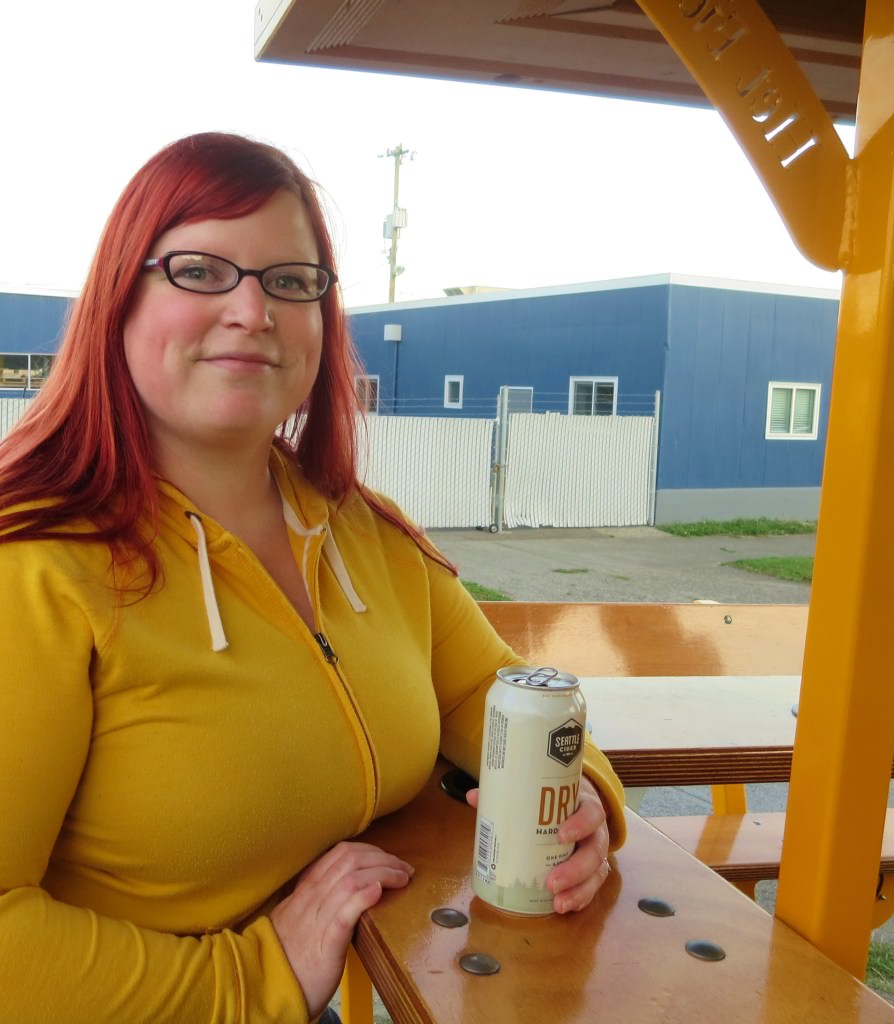 Our driver raved about Reuben’s Brews, another newer nano brewery on NW 53rd St.  Unfortunately, Reuben’s Brews was so popular that we were unable to even fit in the door with the Thursday evening crowd that was there. It must be pretty good, I’ll have to go back and check it out with Paddy someday.

We hopped back on the Cycle Saloon and peddled around the block to The Stoup on NW 52nd St, yet another new nano brewery in the neighborhood.

The Stoup was also pretty busy, but there was room for us to fit in their outside bar area. There was a food truck there as well. Seattle has become quite saturated with food trucks in the last couple years every since the Seattle City Council bill 117225 passed in July 2011, easing regulations on street food vendors. Now you can find just about every kind of food truck you can think of (no longer just hot dogs and tacos). Food trucks and nano breweries have developed a symbiotic relationship–one has a license to sell food anywhere they want, the other has a license to sell beer. Beer drinkers like food, and food eaters like beer. Food trucks can rotate so the food is different on different days of the week, giving beer drinkers more options at their favorite breweries. It’s a win-win for everyone.

We ordered a bunch more tasters, I ended up with the porter which was tasty.

We had about 45 minutes left on our tour, so we hopped back on the Cycle Saloon and peddled back to Leary Way NW and down to Hales Brewery, a large and well-established micro brewery in Fremont. 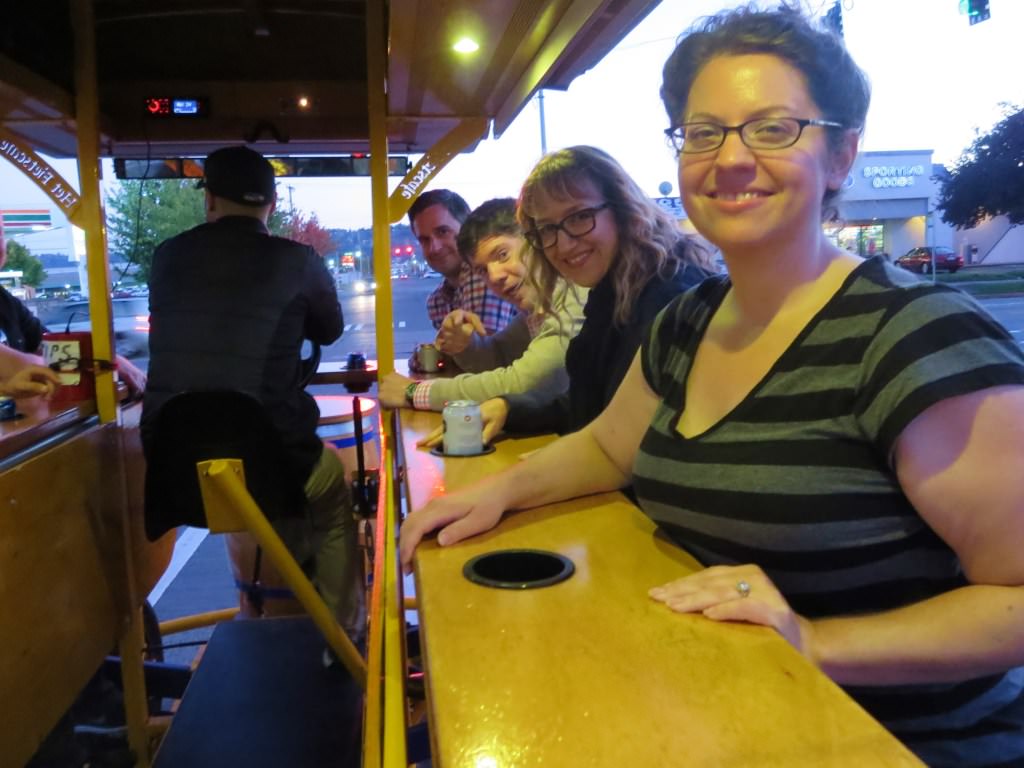 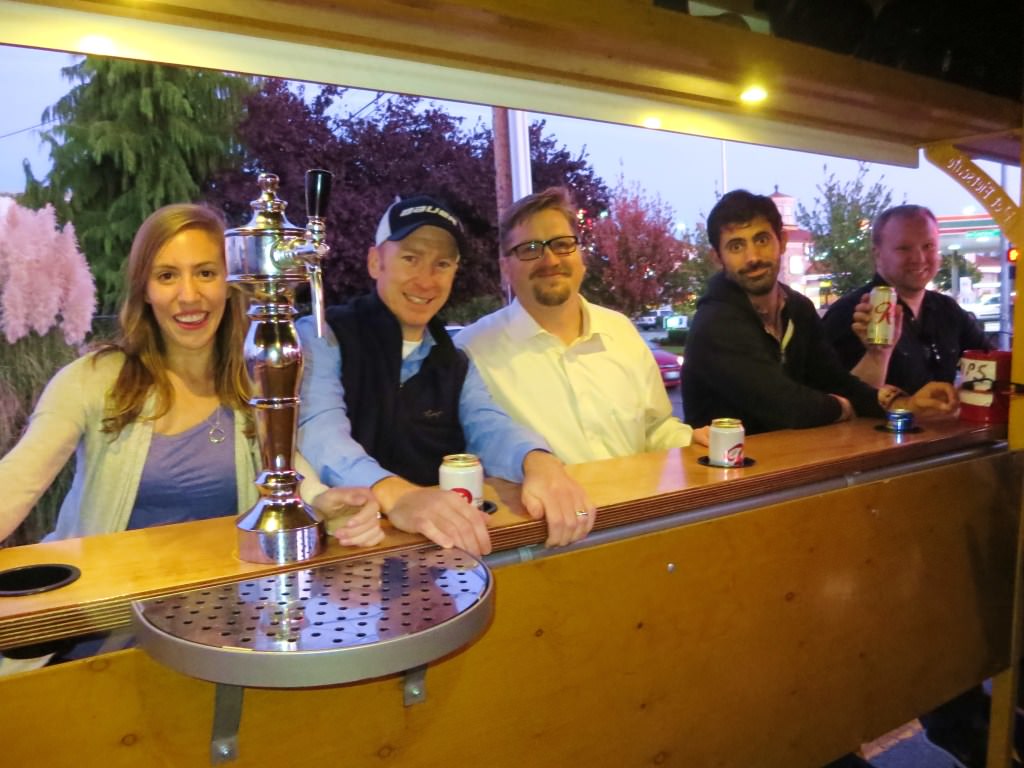 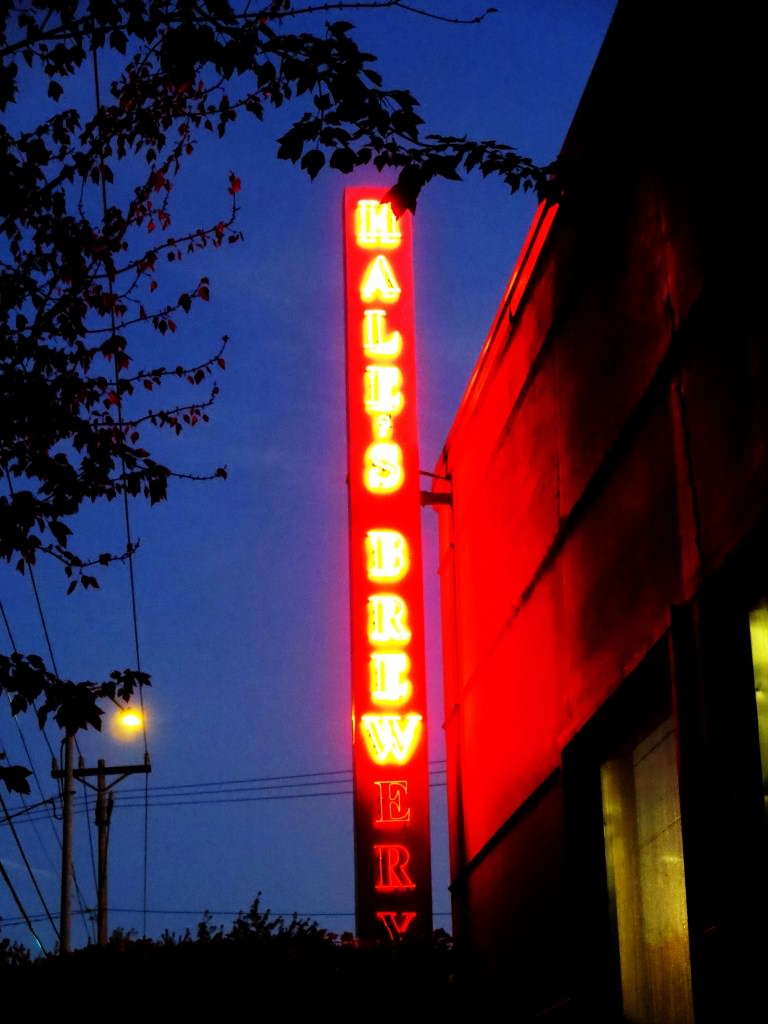 Hales began in 1983 in Colville, WA, and has since expanded to Spokane and Seattle. The brewing is now done at the Fremont location, and distributed throughout bars in the Pacific Northwest. Their restaurant is huge, with lots of seating and a nice menu. We only had time for tasters, so we ordered a last taster sampler and tasted as much as we could in 25 minutes. My favorites were the Troll Porter and the Red Menace Amber Ale. The brewery part is in full view outside the restaurant door, and it’s kind of cool to watch (and smell) the beer being brewed on site.

At 7:30 we returned the Cycle Saloon back to it’s storage location on North 36th St. in Fremont, thanked our driver and had some delicious food at The Red Door to mop up all the beer.

The Cycle Saloon is a unique, entertaining and safe way to tour the many breweries in the Ballard/Fremont area of Seattle. I’d imagine that it is a popular choice for birthday, bachelor, and bachelorette parties as well. Check them out at http://thecyclesaloon.com.