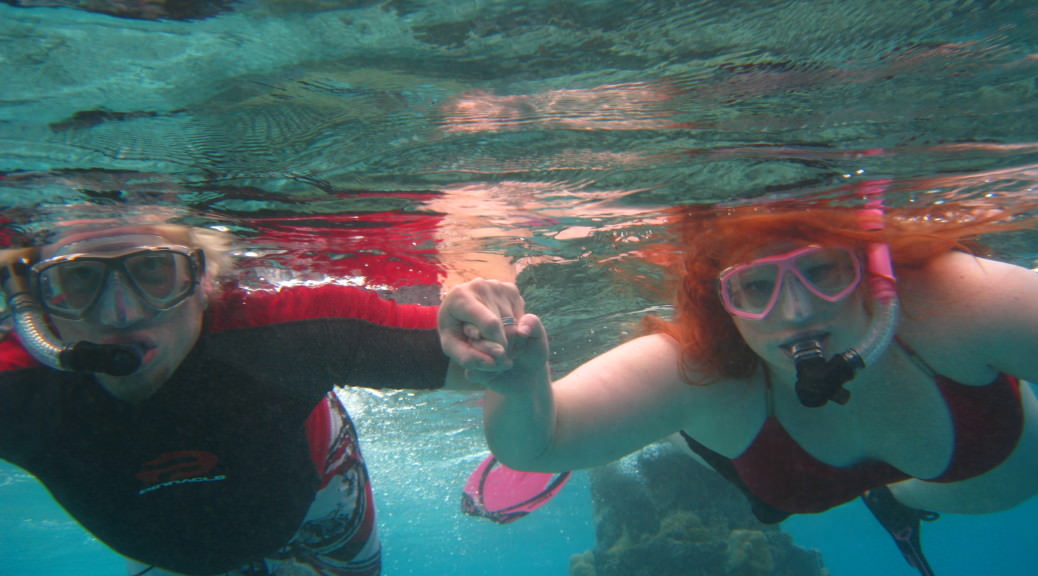 Snorkeling Tips for Beginners: A few things we’ve learned about underwater adventures on our travels to the tropics

If you can swim, you can snorkel. It’s pretty easy, and it’s one of my number one favorite activities when we travel to the tropics. We’ve snorkeled in Hawaii, Tahiti, Costa Rica, Mexico, Dominican Republic, and Thailand. Each experience was different, and we learned some things. I lived on Oahu, Hawaii for a year in college, and snorkeled quite a bit. Here are some snorkeling tips from our experiences:

1. It’s okay to totally freak out the first time.

It’s okay. I did too. Those fish swimming around you aren’t minnows, some might be closer to the size of cats. And what is that thing down there?! With the…..things? It’s not our world. My first time was at Hanauama Bay on Oahu back in 2001. I’d just moved to Oahu, rented my snorkel mask and fins from “Snorkel Bob” on the beach, waded  into the water and stuck my face in. A giant  parrot fish swam right by my nose and I freaked out and ran back to the beach. I calmed down for a few, gazed out at the sea of snorkelers splashing around in the bay, and went back out there. After an hour, I had decided that snorkeling was my favorite thing in the world. My roommate that year had the same reaction. She was from Missouri, and I took her back to Hanauma Bay a couple weeks later and she panicked. It took her longer to get back in the water, but she did, and she didn’t regret it.

If you have a choice, spend the extra money on a dry or semi-dry snorkel. A standard traditional snorkel has an open ended tube, which means that if a wave crashes over your tube or you dive down below the surface, you have to blow a big mouthful of sea water out the snorkel.

After many snorkel experiences with these tubes (if you’re traveling and going on a snorkel tour or renting them, most of the time that is what you’ll get) we were sick of mouthfuls of seawater. So we invested in our own snorkel gear including semi-dry snorkel masks.

Dry and semi-dry snorkel masks aren’t exactly completely “dry,” as you have to be able to breathe, but they have a covered top with air vents that prevent large amounts of water from going down the tube. Trust us, it’s way better.

3. It’s impossible to walk in flippers.

If you’re venturing out into the water from the beach, wait to get into the water to put your flippers on if you can. They turn you into a fish, and moving about on land becomes really awkward.

4. To keep water out of your mask, make sure no hair is under the mask.

My biggest pet peeve while snorkeling is water in my goggles. Leaks tend to happen, as the human face has all kinds of curves and muscles causing it to move. You can keep this down to a minimum though by making sure all your hair is out from under the goggle edge, which compromises the seal. Another snorkeling tip for a tight mask–once you have all your hair out of the way and the mask on tight, take a breath through your nose to suction the mask further onto your face.

5. To keep your mask from fogging, spit in it.

We don’t know why it works, it just does. Spit in the lenses, rub it round, rinse, and you’re good to go.

6. If you don’t see any coral, you’re not going to see any fish.

Fish eat coral, and plants and organisms that live on coral. If you are attempting to snorkel at a beautful sandy beach with no coral in the water, you won’t see much.

Coral is fragile, and it grows at a slow rate of 5 to 25 millimeters per year. If coral is broken or damaged, it takes a very long time to regenerate. There are also organisms living on the coral that are an important food source for fish and other animals. Sometimes it can be hard to avoid in shallow areas, but do your best not to touch or stand on coral. Some coral can also be very sharp, and will cause cuts and scratches if you bump up against it.

8. Don’t touch anything or pick anything up

Don’t displace something from it’s home. You don’t want to harm anything, and you don’t want anything to harm you. There are many dangerous creatures in the ocean, and if left to themselves, they generally won’t hurt you. Spiny sea urchins, lion fish, stone fish, etc all have powerful and painful stingers. Don’t let that scare you though, you’ll be fine if you keep your hands and feet to yourself. If you have a tour guide, he or she may show something to you, but they are knowledgeable of the area and it’s creatures. Most (hopefully most) snorkel guides have respect for the ocean and it’s inhabitants, and know what they shouldn’t touch.

9. Snorkeling is better in deeper water.

The best snorkeling experiences we have both had were boat tours where we were in deeper water, about 6-10 ft or so. This keeps you further away from the coral and the animals, so you don’t have to worry about stepping on anything or being knocked into the coral by a big wave. You are a bit further away from everything, but it’s a nice peacful view of the busy coral garden below.

Back in the day, disposable 35mm film cameras were your only option of taking a photo underwater. Unfortunately, like every disposable film camera, they take terrible photos. They also create lots of waste and are not the best for the environment. These days, technology keeps advancing and now you can buy a relatively inexpensive waterproof digital camera. I have a Kodak Easyshare Sport camera that cost around $60 and takes pretty decent underwater photos. Previously, I had a waterproof camera pouch that I could seal my regular camera up in and use the controls through the clear vinyl. It worked great for several years…until it didn’t. Fortunately it was an old camera that got ruined while snorkeling in the Dominican Republic. I like having a camera that is made to be waterproof a lot better, it keeps the mind at ease and it’s easier to use.

11. If you run into trouble, stay calm

The three scariest things that can happen while snorkeling are being caught in a current, being stung by a jellyfish, and finding yourself in the company of a large shark. None of these have happened to me (knock on wood) but here are some snorkeling tips for if they do:

Of the three, seeing a large shark is the least common. Big sharks prefer deeper water and don’t tend to make it into coral reefs very often. You might see some smaller reef sharks, but they are generally harmless as long as you don’t provoke them. Don’t swim with an open cut or wear shiny bathing suits or flashy jewelry while snorkeling. If you do see a big shark, it will most likely not be interested in you unless you call attention to yourself. Don’t splash, scream, or freak out. Calmly swim back to the boat or beach from whence you came. Avoid snorkeling at dawn or dusk, or when the water is murky. Sharks rarely attack humans, and of the rare attacks that do happen, most are to surfers. It’s usually a case of mistaken identity, as their boards make them look like seals from below.

Getting caught in a current is probably the most common scary situation. If you find yourself caught in a strong current pulling you out to sea, do not try to swim straight back towards the beach. Swim diagonally towards the shore, which will keep you from fighting the current directly. Flippers help you swim faster as well.

Jellyfish happen, unfortunately. If you see one, there are most likely going to be more. If they are on the beach, they are definitely in the water. I will say that I have only seen a jellyfish while snorkeling once in all my snorkels. It was in Thailand, and about the size of a trash can lid. I quickly went the other direction and saw another one. Not wanting to chance it, we cut our snorkel trip short. It was a bummer, because the bay we were in was a great snorkel spot.

The good news is that some species are predictable with the moon patterns. Hawaii has a jellyfish calendar you can check out, and often there will be signs on the beach if they are bad. They typically come to the south shores of the Hawaiian islands eight days after the full moon, and are around for three days. Portuguese Man-O-Wars, however, have no schedule.

If you get stung, pull off any tentacle pieces stuck to the skin. Some say to use vinegar, some say to pee on it, and some say that soap and water are best. I’ve never been stung (knock on wood), so I can’t speak from experience which is best. If your beach has a lifeguard, he or she will usually have something for jellyfish.

12. Your waterproof sunscreen will cease to be waterproof.

No matter how high an SPF or how waterproof your sunscreen claims to be, it will eventually wash off in water. I’ve come back from many snorkel trips with a painful sunburn on my back, even with my SPF 50 Coppertone Waterbabies sunscreen. A great way to avoid this is to wear a rash guard while snorkeling. A rash guard is a water shirt that surfers often use for sun protection and to prevent a rash from their surfboards. Paddy never snorkels without one.

Snorkeling is an amazing experience, and one of my favorite things to do. I’m a bit of a marine biology nerd, and I find all the creatures in the ocean very fascinating. Don’t be afraid, just get out there and get in the water. Hopefully our snorkeling tips will help you have a good experience.

2 thoughts on “Snorkeling Tips for Beginners”