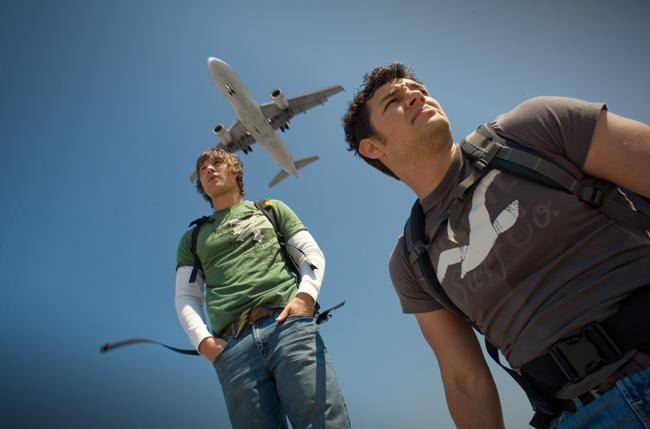 Our favorite travel shows: finding something real in a sea of campy touristy schlock.

Even if you’ve just stumbled onto this blog, I’m sure you’ve noticed that our number one obsession is travel. Because we are regular people with full-time jobs, we can’t travel all the time. Therefore, we like to feed our addiction when we can by watching travel shows and documentaries.

Unfortunately, there are a lot of really bad travel shows out there. Whenever we start looking into a new place to visit, I do a search on Hulu, Netflix, and Amazon instant to see if there are any good documentaries on our destination. Looking at photos and reading about a place is one thing, but it’s even more exciting to see quality film footage.

Some documentaries are so bad I don’t make it through them. Travel hosts are overwhelmingly peppy, fake, and take you to all the major attractions gushing about how great everything is. They rarely show you anything real about the country and culture.

Psssst: Rick Steves! There’s more out there than Europe!

We do have seven travel shows that we’ve found and recommend to get around all the BS and actually learn something. I realize this list is a bit Bordain-centric, but what can I say–he’s one of the best.

Anthony Bourdain’s latest travel series on CNN, Parts Unknown, is by far the best travel show out there at the moment in our opinion. This is not a show for tourists. In Parts Unknown, Tony moves away from food-centric travels and explores the places the tourists don’t go. The change from the Travel Channel to CNN is very apparent–the show is more cerebral and focused on culture and sociopolitical issues of the countries and regions he visits rather than on food and sightseeing.

The cinematography has also received an upgrade since No Reservations. It is beautiful, truthful, and introspective. This isn’t a show Bourdain would have been able to do in his earlier years, this is a show to be hosted only by a well-traveled intellectual. He has learned a lot about the world in his vast travels, and wants to delve deeper. All episodes feature Bourdain in the company of locals who are guides and informants into their lives, politics, and culture.

If you’re a traveler (not a tourist), and are looking to see and learn more about the world and the reality of the places he visits, you will probably love this show as much as we do.

Anthony Bourdain’s second show, No Reservations is a close second favorite of ours to Parts Unknown. It was a show on the Travel Channel, with quite a few seasons (most on Netflix but also for sale on DVD). The show is mostly centered around food, and how food is central to all cultures. Each episode visits a different location (abroad as well as places in the US), and Bourdain is paired up with a local guide to show him around. Every episode is different, but follows a basic formula: Local street food, fine dining and modern culinary trends in the area, and visiting his host’s family for a home-cooked meal. Many episodes also feature Bourdain getting pretty plastered with the locals, and his subsequent search for a local meal that doubles as a hangover cure the next morning. 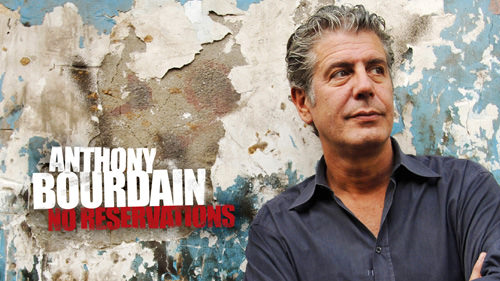 Bourdain’s dubbed-over commentary throughout the show is just like his writing; insightful yet snarky, full of vinegar, and comic relief. He is always respectful of his hosts, and eager to learn everything (almost everything) they are willing to teach him. He eats everything that is served to him, and I must say he is braver than I am (not sure if I could eat raw bloody seal meat and organs straight out of the animal in Greenland), and I must applaud him for that. No Reservations is another show for travelers, not tourists. If you’re looking to see some real culture, or just really like food, this is a great show. Be warned, it will make you hungry.

I’ll be honest; when I watched the first episode of this show my reaction was “ugh, who are these trustafarian frat boys?” We kept watching, however, and we’re glad we did. Departures is a show about late-20’s Canadian friends Scott Wilson, Justin Lukach, and Andre Dupuis (the rarely-seen camera guy) dropping everything and traveling the world for a year (or so they thought).

It became quickly apparent that Scott is the brains of the operation, while Justin is all heart. While Scott does his tour guide duty of explaining where they are and what is going on to the camera, Justin is off chasing a chicken, eating too much chocolate, or pestering a camel. Scott diligently learns some Japanese phrases for their travels in Japan, while attempting (and failing) the entire time to get Justin to learn “arigato.”Justin made me cringe a bit at first, but he eventually grew on me. He loves kids and animals, will try anything with no hesitation, and provides the comic relief to the show that makes it a lot more balanced. After season two I found him to be quite endearing.

Season 1 starts with a road trip across their native country of Canada, and then they dive right in by going to Jordan and then India. As the show progresses and more countries are visited, they seek out culture and landscapes further and further off the beaten path. Food isn’t much of a focus here– the culture, history, and natural beauty of their destinations is the main objective. As the show moves on, you can see their culture shocks becoming fewer and their cultural understanding grow.

What really makes this show however, is the cinematography of Andre Dupuis. Andre gets some fantastic shots, almost on par with the cinematography in Parts Unknown. He does a great job of highlighting the beauty of each country they visit–both the people and the landscapes.

Season 1 ends, and their year abroad is over, but the three friends can’t sit still. As Scott Wilson says in the opening credits of the show, “the travel bug gets in you, and it’s got you.” There are two more seasons (we’re still waiting for season 3 to be released on Netflix), and I’ve read about a new show they are doing called Descending, about diving around the world. I may break down and order the DVD from their online store if Netflix doesn’t release both shows soon.

If you like alcohol, and are in the mood for a little dose of comedy with your travel shows, you’ll probably enjoy Zane Lamprey’s Three Sheets. This guy got paid to travel all over the world and drink. I’m going to let that concept sink in with you for a moment.

Zane Lamprey has worked all over the world of television, as a comedian, writer, actor, producer, and editor with various networks. Over the four seasons of Three Sheets, he and his stuffed monkey Pleepleus explore the specialty drinks and alcohols of different regions in the world. He drinks everything from champagne in France, cachaca in Brazil, grappa in Venice, cobra blood in Taipei, and bourbon in Kentucky.

Zane eats everything, drinks everything, and learns something about the local culture from his local guides. The show is educational, funny, and generally entertaining. He has gone on to do a couple of other shows, including a fan-sponsored semi-continuation of Three Sheets called Chug on the National Geographic channel.

A Cook’s Tour is Anthony’s first TV show on the Food Network from 2001. This show is centered mostly on food much like No Reservations, but Tony is much younger and much more naive. The cinematography is a bit rough but he visits a lot of interesting places and eats a lot of really delicious-looking things (and a few not so delicious-looking things, such as a big fat grub that he describes to be “like a twinkie, creamy on the inside”). This show is a bit older, but it’s worth checking out–especially if you’re a foodie.

Anthony Bourdain’s final show on The Travel Channel is about what you can see and do on a layover in a major city with only 24 to 48 hours. The show is pretty good, but his snarky comments about the Travel Channel network throughout the show and his lackluster enthusiasm make it pretty obvious that he is just fulfilling a contract. Even in the cover photo for the show below, he looks less-than ecstatic. I can hear the photographer at the photo shoot: “Tony! Look like you’re somewhere exciting and exotic! How about chopsticks? Get him some chopsticks! Tony! Hold up the chopsticks like you’re about to eat beef tripe! There you go! Fantastic.”

I will say that The Layover episode on Seattle did us Seattleites proud. He even went to Archie McPhee’s, the best store in Seattle. It was much better than the No Reservations episode that combined Seattle and Portland together and spent half the episode focused on some elite supper club we’d never heard of.

Long Way Around is less of a travel show and more of an adventure documentary. It documents the journey of British actor Ewan McGregor and his friend Charley Boorman on a 20,000 mile motorcycle ride from London to New York, through Europe, Mongolia, Russia, Siberia, Alaska, and Canada. There are only 9 episodes and the first two start off a little slow as they document their preparation. Their tour is an off-beat adventure well off of the usual tourist trail, including impromptu stays with locals, a few disasters, and several unnerving situations.

They have a second show about their ride from Scotland to South Africa called Long Way Down, which is still in our Netflix queue. I think the second journey may be a little more exciting than the first. We shall see.

Overall I think it is a little ridiculous how few really great travel shows there are out there. Maybe that’s what the majority of the US and Canada want–peppy, faux-enthusiastic, corny show hosts telling you how to visit the Eiffel Tower or Santorini. We want to know about the culture, history, and politics. Show me how a rural family in Mongolia lives and what they cook for dinner. Tell me what snake bile tastes like and why people in Vietnam drink it. Show me the best night market in Bangkok to get street food at, and what you recommend eating. Tell me why people in Zambia wash their dishes with ashes.

One thing that bums me out about the above list is that it is entirely male. I’ve seen a few female hosts on travel shows, and all of them were terrible. I’d love to see more shows hosted by intelligent women, particularly about traveling as a woman in third world countries. There are a lot of things to know regarding what you should wear and how you need to behave as a woman in specific countries that are essential to your safety and experience as a female traveler.

Hopefully we’ll see more travel shows like the ones above. If we can’t travel all the time, we at least want to learn and live vicariously through those who do. If you have any recommendations, please contact us!

2 thoughts on “Our Favorite Travel Shows”