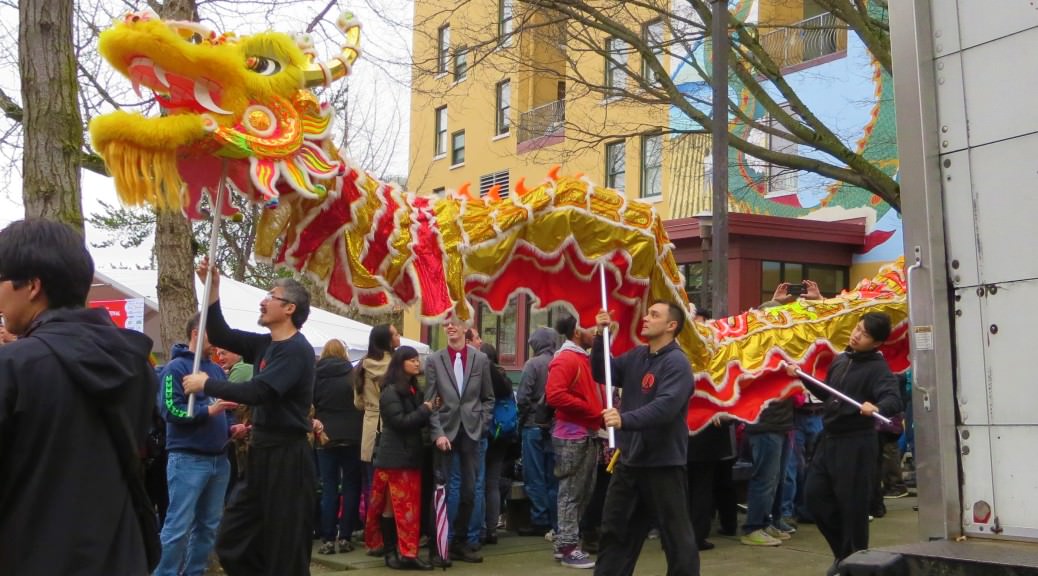 Lunar New Year in Seattle’s International District: dragon and lion dances, martial arts performances, firecrackers, and a chance to sample a lot of great food on the $3 food walk

Every year, Seattle celebrates the Asian Lunar New Year that is widely celebrated across Asia. Many people refer to it as Chinese New Year, but many other Asian countries besides China celebrate it. The Lunar New Year is based on the Chinese lunisolar calendar, which is an astrological calendar revolving the month beginnings and endings around the cycles of the moon.

This year I am a liason for a Chinese exchange student through AFS, and have been learning a bit more about Chinese culture. We never really knew much about the Lunar New Year festivities or even that there was much of a celebration in Seattle at all, but this year we read up on it and decided to check it out.

Seattle’s “Chinatown” is pretty small compared to most large cities’ Chinatowns. It is officially called the International District, as the neighborhood includes Vietnamese, Korean, Thai, Filipino, Japanese, and other international restaurants and shops. 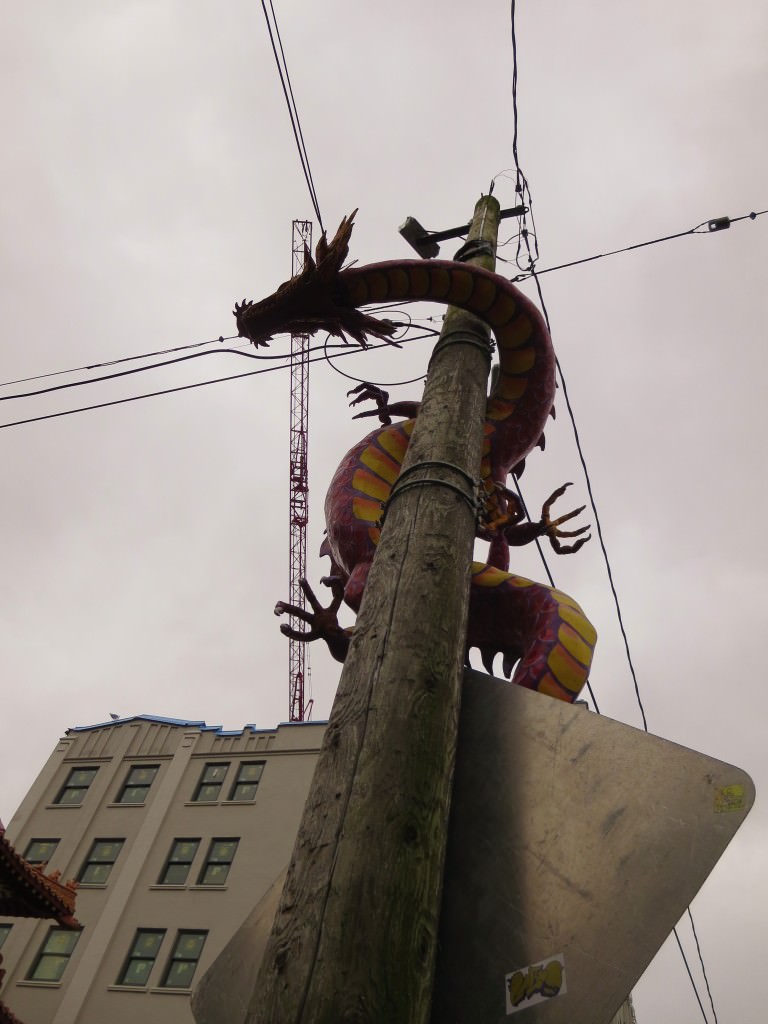 We read up on the Seattle Chinatown International District website that the event schedule was from 11 AM to 3 PM on Saturday February 13th. The lunar New Year is never on the same day, as it coincides with the cycle of the new moon. It is usually sometime in late January to mid February.

We arrived in the International District at 10:30, and everything was just getting set up. Crowds were gathering around the stage at Hing Hay Park on S King Street. Paddy hadn’t eaten breakfast and was starving, so we ducked into busy Mike’s Noodle House which was open serving noodle soup and congee (Chinese savory breakfast rice porridge) and he ordered some soup. Most everything on the menu was between $6-$8, and he said the soup was great. Note: Mike’s Noodle House is cash only.

Paddy wasn’t quite finished with his soup when we heard drums and cymbals across the street, signaling that the the lion and dragon dances were starting at Hing Hay Park. He told me to go ahead and he’d catch up with me.

I was able to catch a dragon dance circling the crowd before trying to squeeze my way in for the lion dances.

The crowd was tightly packed, but I caught a bit of the first round of lion dances as I slowly squeezed my way forward.

The performance was put on by a local martial arts troupe, who also put on a martial arts performance after the lion dances. There were people of all ages performing and it was pretty impressive.

This tough little guy was my favorite:

Paddy found me in the crowd during the martial arts performances, and we both had a better view finally for the next lion dance, which was pretty fantastic.

It takes two people to comprise the lion, one person to be the back legs and one to be the front legs and operate the head, which has blinking eyes and an opening and closing mouth. It was really amazing how much they could make the lion appear like an excited kitty cat dancing and prancing around. Most impressive was when the person in the back lifted the front person to make the lion rear up or stand up.

At the end of the dance the lion “drank wine” out of a large gold container and became drunk, staggering about. It was entertaining.

Once the lion dance was over we picked up a map from the information booth of the $3 food walk. The food walk is a chance to walk around the neighborhood and sample a small portion of a dish from quite a few participating restaurants. It is a great way to get to know the food in the area without committing to one particular restaurant or meal.  There was also a tear off “passport” section of our food walk map that we could get stamped and fill out to enter to win a trip from Delta Airlines at the end.

**Note: Everything is cash only for the food walk, and there are not a lot of ATMs in the International District. Bring cash, or you can find a couple ATMs near/in Uwajimaya shopping center or at the Bank of America on 6th and Jackson.

We looked at our map and decided to start with the dim sum sampler at Dim Sum King on Jackson Street. The line was long but moved quickly as a lady at a table collected money, another stamped food walk cards, and a third filled the table with dim sum samplers as fast as they were being taken.

We got a sampler with a custard bun, a coconut bun, and two pot stickers. The pot stickers were average, but the pastries were phenomenal. My favorite was the coconut bun, which had a buttery sweet coconut paste on the inside. The custard bun was creamy with a nice crust. We will be back to this place for sure.

We didn’t want to limit ourselves to Chinese food on the food walk, so we walked a few blocks further east on Jackson Street to Than Vi to sample some Vietnamese cuisine. We sampled their fried chicken wings with Sriracha, which were really good and so fresh from the fryer that we had to wait a bit to eat them because they were so hot.

Near Than Vi we saw another lion dance going on on the side of the street, and in a parking lot a block up the hill on Jackson we could hear a massive amount of firecrackers going off for about ten solid minutes. 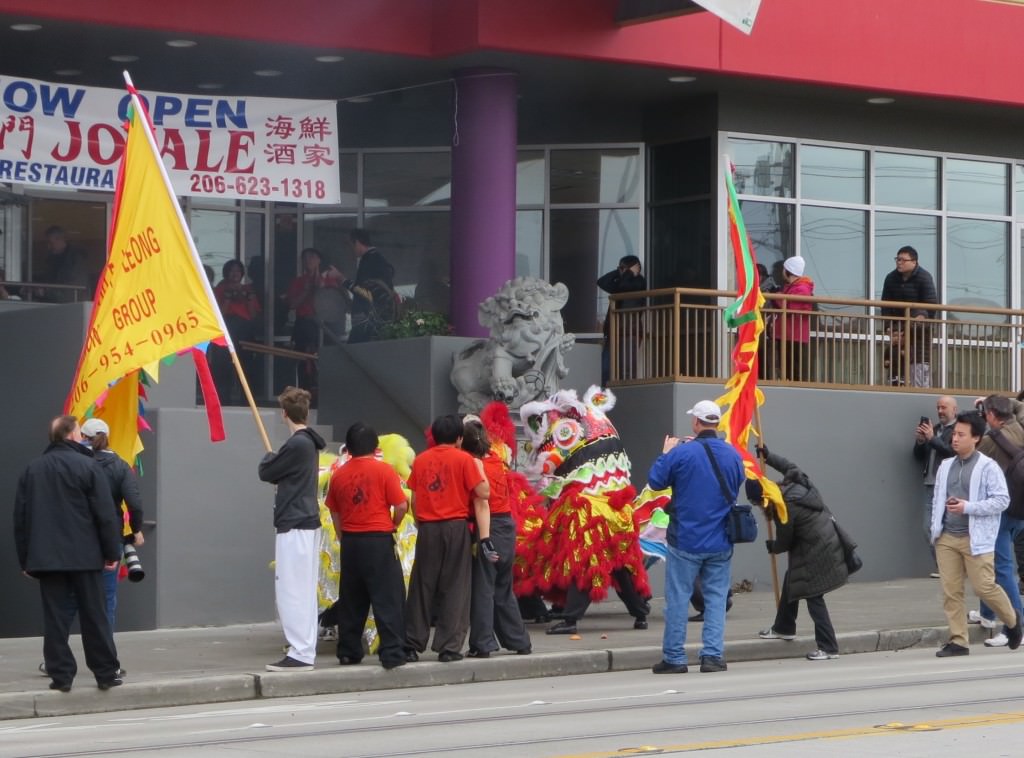 It was about 1:00 PM and we were starting to lose steam, so we headed back to Uwajimaya to sample the Japanese Takoyaki at Tako Kyuuban Takoyaki. Takoyaki is one of my new favorite things. It is octopus in dough fried in special fryers that are full of round indents. The cook pours the takoyaki batter into the fryer, and then when the takoyakis are just about cooked on the bottom, they are transferred one by one to the other identical side of the fryer with picks and turned and shaped with the picks while cooking until they are delicious little fried balls of awesomeness. They are then taken out of the fryer and squirted with a couple kinds of sauces, smoked dried bonito fish, and dried seaweed. Here is a diagram from their website:

We decided to do one more food walk sample before we headed home, and Paddy wanted to end with something sweet. In the same Uwajimaya food court as the takoyaki stand was UniCone Crepes, also participating in the $3 food walk with strawberry banana crepes. They were tasty.

We dropped our stamped food walk passport off at the info booth to enter the Delta Airlines contest, and called it a day. That evening we went to our friends’ annual Chinese New Year party complete with karaoke.