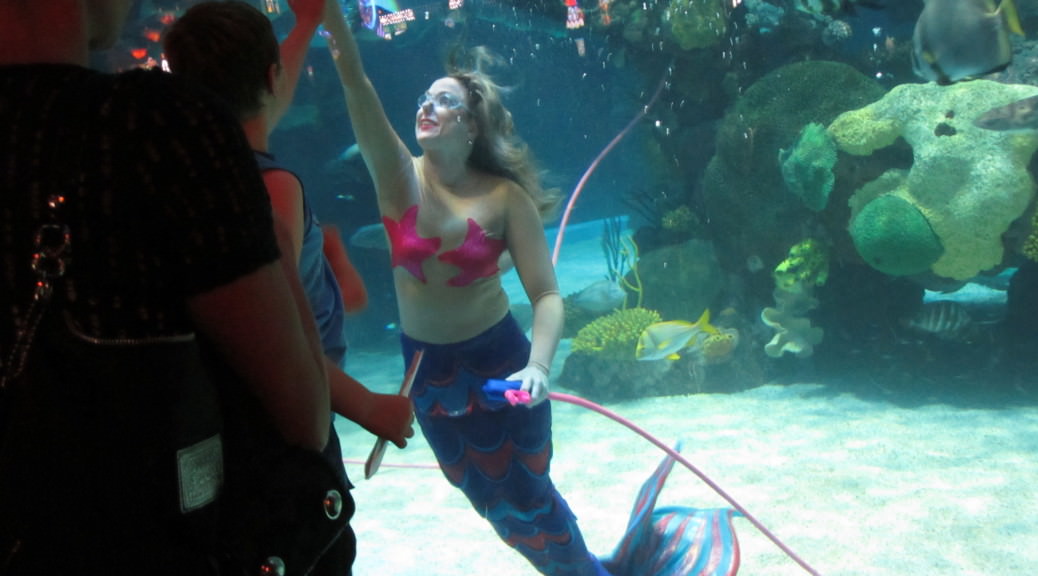 Las Vegas is one of those places that always makes for a great quick getaway. Flights are usually pretty cheap from most places in the US, and you can also find great rates on hotels. These days, The Strip isn’t as cheap as it used to be, however and you will have better luck staying off The Strip at a hotel that provides a free shuttle service (we stayed at the Orleans and it was great and affordable.)

There is a lot to see in Las Vegas, and we didn’t see it all. This was our second time here. We still have yet to make it to Fremont Street, which we will do next time. This trip to Las Vegas was part of a week and a half long road trip around Nevada, with a focus on seeing as much weird Americana as we could see.

While you could easily spend a week or more in Las Vegas and still not see it all, we don’t recommend more than four days. Las Vegas gets to you after awhile. The clanging slot machines, tourists, flashing lights, and lots of booze get to be a little much and Las Vegas is best seen in smaller doses.

Excerpt from original post Nevada Road Trip 2011. Read about the rest of our adventures touring the weird and wild sights of Nevada here. 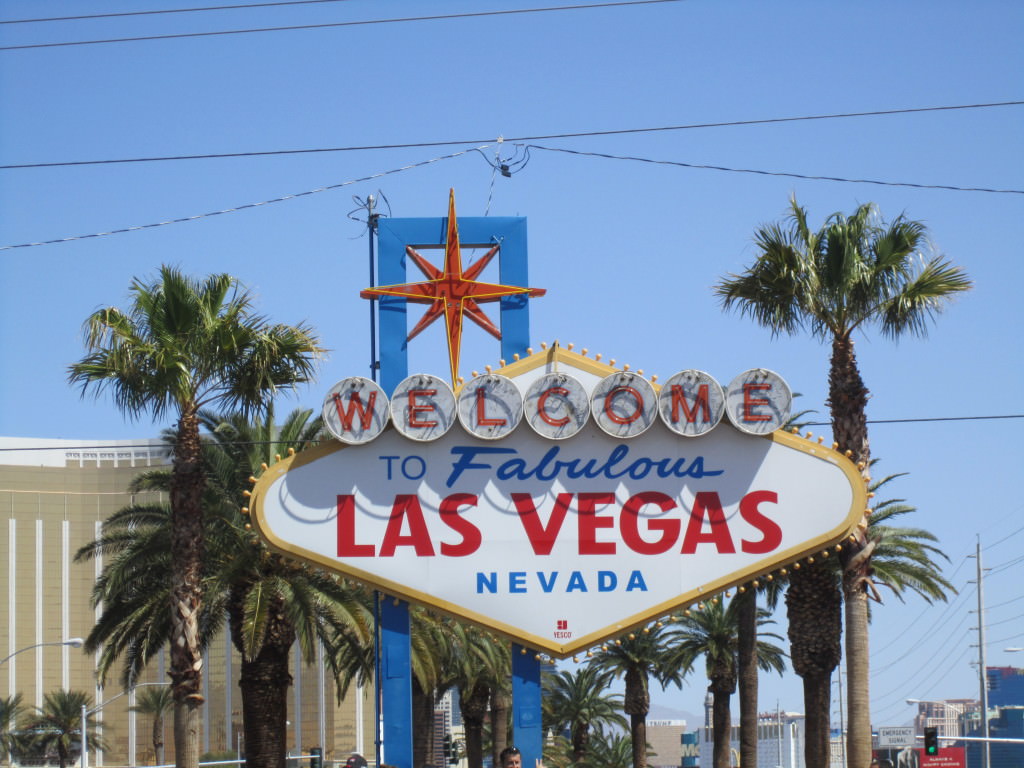 We arrived at The Orleans in Las Vegas around late afternoon, checked in,  and relaxed for a bit. This was actually our second time in Las Vegas. We opted for The Orleans as our friend recommended it. It was a really good price for the quality, and though off the strip there was a convenient free shuttle every 15 minutes or so to the strip. Last time we had stayed at the Mirage in 2003, which was also really nice. It seems that prices in Las Vegas aren’t what they used to be though, and the strip these days is kind of expensive all-around.

That evening we had an underwhelming meal at the TGI Friday’s in the casino, just because we didn’t really feel like going anywhere that night. We played some games and had a few drinks and relaxed. We had our cooler with us and there was a convenience store near the hotel we could walk to, so we stocked up on beer and wine there to save a little money and used the ice from the ice machine to fill the cooler.

The next morning, our friends Stephen and Heather flew in from Seattle to join us for the Las Vegas portion of our trip. When they had had a little rest, we all took the shuttle to the strip and walked around a bit, and did some shopping in the Forum shops at Ceasar’s Palace. Las Vegas had great spring weather, warm enough to wear a tank top and shorts during the day. It was a nice change from frigid Ely. I was particularly fond of the Bettie Page store, with retro-style dresses and accessories. Since this trip, they’ve opened up a location in Seattle. I’ve been trying to keep myself away from it as I need to save money for other things….like travel.

In the afternoon I was hell-bent on seeing the mermaid show at the Silverton Casino, which is 6 miles from the strip and pretty out of the way. It’s more of a local spot, which our cab driver confirmed on the way there. We had some food and drinks in the Mermaid Lounge which had a nice atmosphere and a great view of the fish tank, but horrendous service. There was barely anyone there and we had to wait forever to get any service. I did really enjoy the jellyfish tank above the bar. The mermaid show happens in the fish tank several times throughout the day–consult website for times.

The mermaids put on a great show, even posing for pictures and interacting with the spellbound little girls pressed up against the fish tank.

After we had our fill of the mermaids, some food, and a few drinks, we caught a cab back to our hotel.

We gussied up a bit and caught another taxi to The Peppermill Restaurant and Fireside Lounge on the strip. The Peppermill has your standard diner fare, and seems to be a good spot for late night breakfast or to cure a hangover the morning after. With it’s flourescent pink lights, giant indoor fire place, and pink velvet furniture, it is everything over-the-top about Las Vegas that one could hope to find. We weren’t there for food, though, we were there for the cocktails in the Fireside Lounge. Particularly one cocktail–the infamous Scorpion Bowl. The Scorpion bowl is a fish-bowl sized drink  with all kinds of booze and juice in it, along with your choice of 1-4 long straws to share the drink with.

After our scorpion bowls were dry and we had a slight buzz going, we decided just to head back to the Orleans where the drinks were cheaper and play some slots and hang out.

As we had a car with us this trip, we decided to head out of Las Vegas and do some sightseeing in Red Rock Canyon. If you don’t have a car or want to rent one while you are in Vegas, you can easily find tour groups to Red Rock Canyon online or while in Las Vegas.

We weren’t really outfitted for some serious hiking, so we drove around the scenic loop stopping at the view points and did a very easy walk in Lost Creek, which has views of cliffs with old petroglyphs on them.

We got to see some of the Las Vegas suburbs on the way to Red Rock Canyon, and it was row upon row of the same house. Strip malls and cookie cutter housing complexes. I can’t say Vegas really appeals to me as a place to live.

We got back to the hotel and spent some time relaxing at the Orleans pool. It was warm enough to lay out in the sun but not super hot. There was a bar at the pool that served frozen drinks that were very refreshing. Overall, the Orleans pool isn’t one of the best pools in Las Vegas, but it was nice enough. After cold rainy Seattle and freezing cold Ely, we were ready for some sunbathing and swimming pools.

That evening we walked around the strip a bit. Eventually we were hungry for dinner and felt like splurging on something a little nicer. We walked around and decided on Mon Ami Gabi in the Paris Las Vegas casino hotel. It was packed even at 9:00 PM but we got on the waiting list and were seated at 9:30 outside. It was a warm night and the restaurant has a nice view of the Bellagio fountain show across the strip. I don’t recall everything we had but I do remember a very nice duck leg confit and a side of garlic spinach that were very tasty. I think Paddy had steak frites. It was all very good and we would definitely go back.

When we left the restaurant, it was already 11:00 PM and we had a tour planned for the next morning, so we headed back to the Orleans for a few more cheaper drinks before calling it a night.

One of our main priorities in Las Vegas was visiting the Neon Boneyard. We had to make tour reservations in advance as they can only take a certain amount of people per day and you can only visit on a guided tour. The Boneyard was definitely a top highlight of our trip. It is a where all the neon signs of Vegas go to die, and an amazing walk through the ghosts of Vegas past. Our tour guide gave us an informative tour of all the old signs and Las Vegas history. I would highly recommend booking a tour here.

That afternoon I really really wanted to see an Elvis impersonator (it’s just so classic Las Vegas). Unfortunately, Elvis impersonators are not as prevalent as in days past but I managed to find one free show with Big Elvis at Bill’s Gamblin’ Hall and Saloon on the strip (I believe he has now moved his show to Harrah’s).  We got to Bill’s and ordered some drinks, but unfortunately Big Elvis was out sick that night, so we got Chuck. Chuck looked much more like a Roy Orbison impersonator but sang all Elvis songs. Honestly, the show would have been much better if he had just gone with a Roy Orbison routine. I was a little disappointed, but we still got a classic Vegas lounge act in and had fun.

After the show, we split off from Heather and Stephen and went to Jubilee at Bally’s, which is one of the most classic Las Vegas shows there is. Lots of showgirls, feathers, glitter, and synchronized dancing. It was a great show. We had purchased some of the cheaper tickets and were on the isle. Shortly after the show began, we noticed the usher picking people off the isle to go down to some open seats in the front. He hadn’t picked us, so Paddy went and asked him if there were any front seats open that we could move to, and he found some for us.

**Tip: If you need to book a cheaper seat, book an isle seat and ask the usher if it might be possible to move to open front seats if available. You might get lucky like we did. 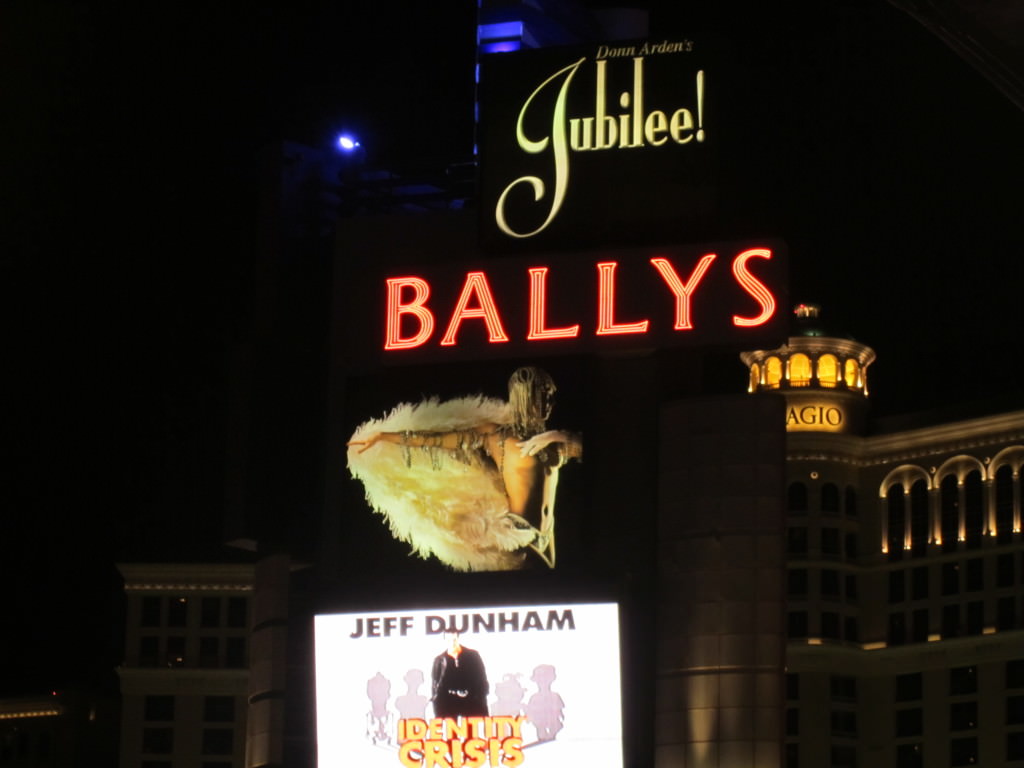 After four nights in Las Vegas, we were ready to leave and get back on the road. Vegas is fun, but it’s definitely an “in small doses” kind of a destination. I wouldn’t recommend more than 4 nights. The slot machine clanging and cigarette smoke get to you after awhile.

If we go back to Las Vegas (which we probably will, eventually) I’d like to stay near Fremont Street and spend some time checking out old Vegas. I’d also still like to see a real Elvis impersonator (not Chuck) if such a thing still exists, and a Cirque de Soleil show.