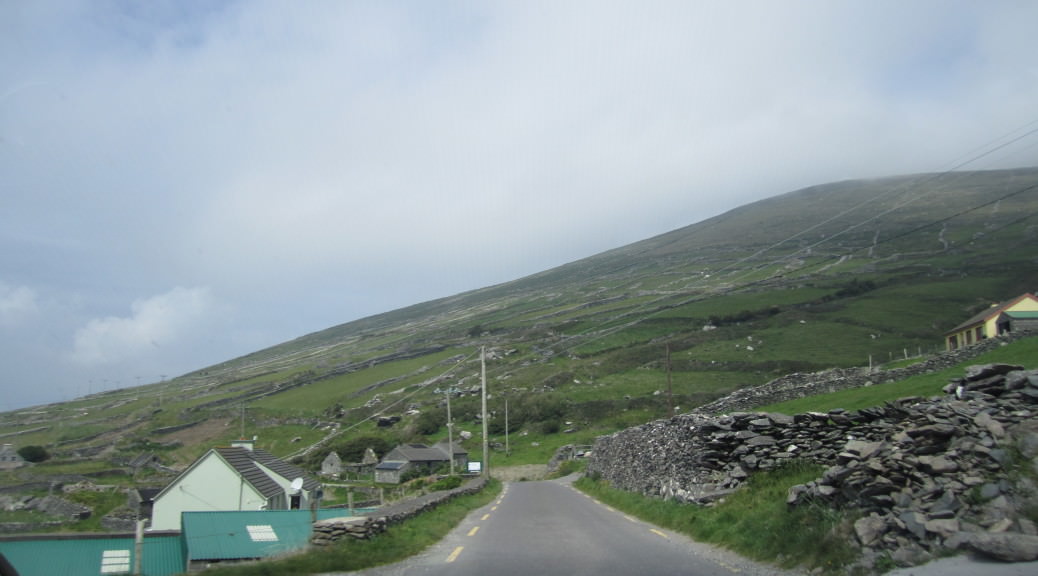 Ireland was the first time we had ever rented a car in a foreign country. It was also our first experience driving on the left side of the road. We were pretty nervous about this, but we made it through our journey alive and have some tips for anyone driving in Ireland for the first time. (Read about our entire Ireland adventure here).

I didn’t do a whole lot of research on rental car companies, I just went with a big name that would let us pick up in Dublin city and drop off in Galway. We ended up going with Budget Rental Car on Drumcondra Road in Dublin. Our experience with them was fine, no complaints. After our experience, here are a few things you should know:

I drive a manual shift Ford Ranger at home every day. Manuals are much more common in Europe and therefore much less expensive. We opted to pay extra for the automatic, however. The thought of negotiating foreign road signs, directions, driving on the left side of the road, AND shifting with your left hand instead of your right on the left side of the car would be a bit too much for our first time driving in Ireland. If you do decide to go for the cheaper and more readily available manual shift cars, the pedals are still the same (clutch left foot gas right)–so at least that is still the same.

When we went to pick up the car, the automatic that we had reserved had been returned damaged by the previous drivers, and they were not able to rent it out. They called around as we waited for two hours and finally found another automatic they could borrow from a different company for us to use. We could have switched to a manual, but we just weren’t comfortable. The choice is up to you, but be aware that automatics are more expensive and more difficult to find. Reserve one far in advance if possible.

It is very expensive.

Renting a car in Ireland is very expensive. We rented one for three days and it was around $500.00 with insurance (get the insurance). This included a full tank of gas, which we would be reimbursed for if we returned it full. A tank of gas (called petrol in Ireland) was $160.00. Fortunately we only had to fill it up once the whole time, with a little top off at the end. All that being said, however, renting a car is really the only great way to see Ireland, and we would highly recommend it. After driving in Ireland, I don’t plan on whining about American gas prices ever again.

The smaller the car, the better.

The roads in the cities and many main roads around the country are very narrow. We had reserved a Toyota Yaris, the smallest car available but wound up with a large sedan. There was an obnoxious group of American tourists renting a large SUV in the line before us at the rental company, complaining about the lack of space for their copious amounts of luggage.

A large car for driving in Ireland is not the best idea. When driving around the Dingle Peninsula, there were roads so narrow they looked like a one-way. We would turn a corner to find a giant tour bus barreling straight at us at high speed, causing us to get as close to the edge of the road as possible, wincing and hoping we wouldn’t be hit. Go with the smallest car you can get.

There is a toll on the M50 in and out of Dublin but it doesn’t have a toll booth–they scan your license plate from a surveillance camera. You can pay the toll at most gas stations at an electronic “Payzone” machine. It is about 3 Euros and must be paid by 8:00 PM the day after you use the toll. If you don’t pay, your car rental company will be charged and they will charge you the fine and some hefty administrative costs. You can ask your car rental company about the toll, some will include it in your cost and pay it for you, or they can tell you more about how to pay.

Other toll booths on the highways have a traditional pay-at-the-booth system, so keep some change handy.

Driving on the left:

Paddy ended up doing all the driving in Ireland. We had arranged for both of us to be allowed to drive, but after he started, we figured he was more used to it than I was and that he might as well keep driving the rest of the trip.

The first couple days I kept yelping from the passenger seat as we nearly side-swiped parked cars on the passenger side on the narrow roads. Switching to the left alters your perception of how close the other side of the car is to things, and it took a couple days for Paddy to get used to it. He said he kept feeling like he was driving in the middle of the road, but he wasn’t. We didn’t sideswipe anyone, so all’s well that ends well.

Paddy said the rear view mirror on his left instead of right took a lot of getting used to as well.

Here is a video I found on YouTube that explains the roundabouts:

Another rule to be aware of is that unlike the US, you can’t take a “free right” (or in Ireland–a “free left”) at a red light.

Overall, driving in Ireland wasn’t too difficult. (I’d be lying if I said we weren’t a little relieved when we returned the car in Galway, but I’m kind of relieved every time I turn in a rental car. ) Renting a car and exploring Ireland yourself really is the only way to see the country. Skip the tour buses and have your own unique adventure!