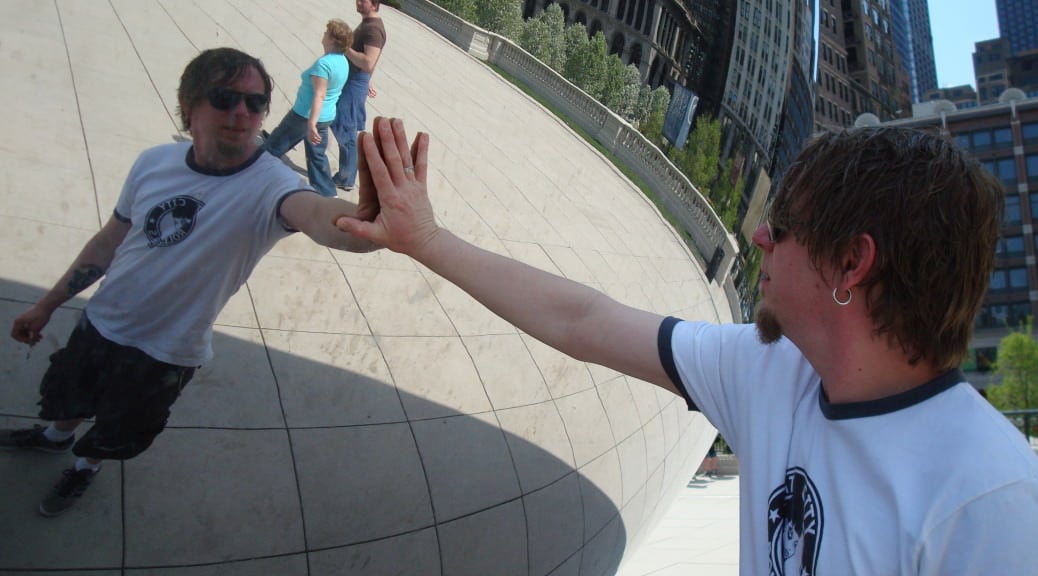 Our trip to Chicago in 2008: Heavy metal burgers at Kuma’s Corner, thrifting in Wicker Park, The Hancock Tower, Navy Pier, and sculptures at Millennium Park.

Chicago was a quick trip in May of 2008. The weather was great, but they don’t call it the windy city for nothing. Our flight was delayed for several hours due to high winds in Chicago.
If you’re going to Chicago, expect flight delays. And as a general rule, we try not to book flights with a layover in Chicago unless it’s the only option. Especially in the winter. But it’s a great city that is definitely worth any travel hassles. 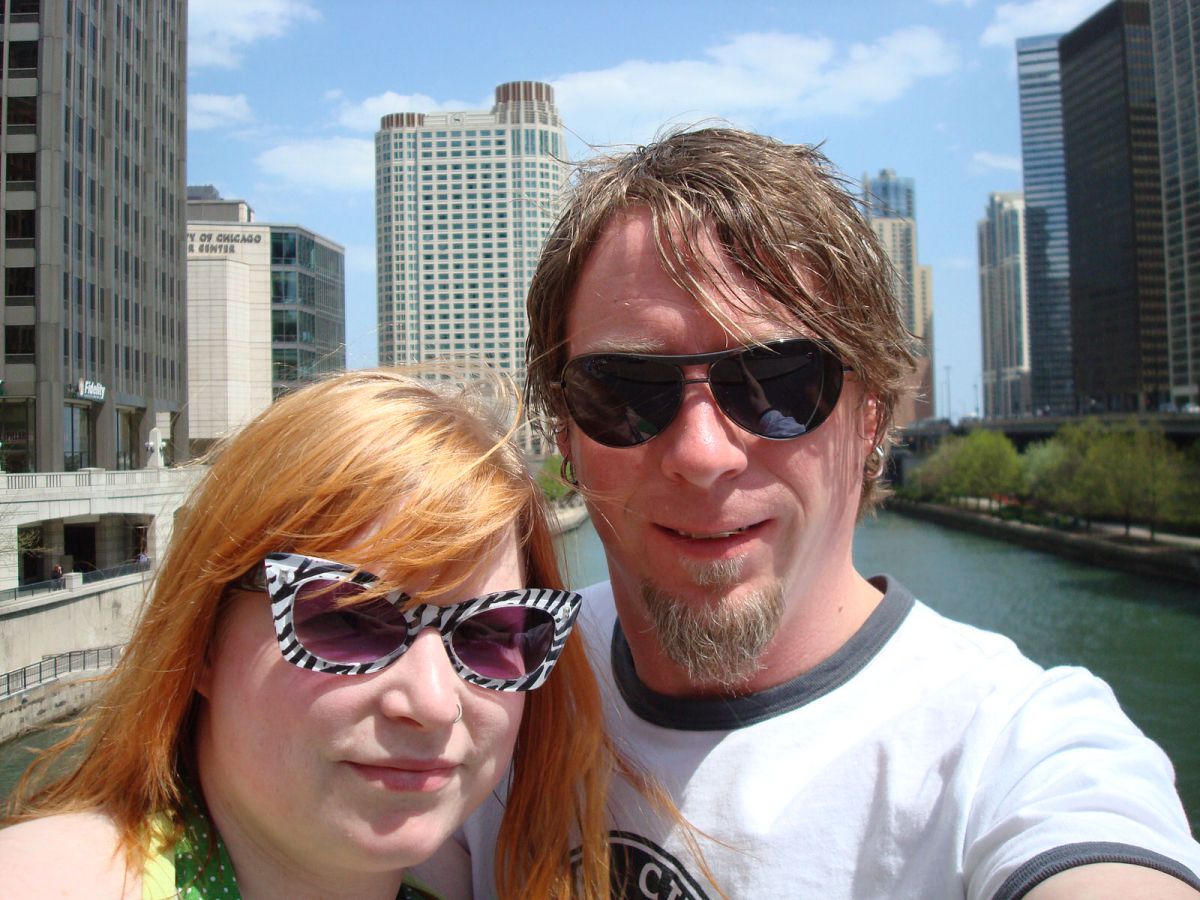 We were visiting a good friend of ours who had moved to Chicago to go to school and eventually become an art professor. We stayed with him in his apartment the first two nights, and then at the Red Roof Inn downtown the last two nights. At the time the Red Roof Inn seemed to be the best deal in town–we got a room for around $100 a night in the center of downtown, in walking distance to everything.

Our friend Al showed us around his neighborhood. Unfortunately, we didn’t take as many photos as we wished we did, and the trip was a long time ago and such a short trip that we don’t have a ton of things to share. But we’ll gloss over the highlights.

First of all, if you eat at one restaurant while you’re in Chicago, go to Kuma’s Corner. Kumas is what happens when you pair great and adventurous pub grub cooks with heavy metal enthusiasts. The result is hands-down the most mind-blowing burger experiences we’ve ever had.

Be prepared for a line, we had to wait for awhile. It’s worth it.

Paddy had the “Pantera,” a beast of a burger with homemade ranchero salsa, bacon, shredded monterrey jack, roasted poblano pepper, and tortilla strips on a pretzel bun. I had the “Iron Maiden” with a chicken breast instead of beef, which had chipotle mayo, cherry peppers, avacado, pepper jack cheese, lettuce, tomato, and onion on a pretzel bun. The pretzel bun is the part that pushes these burgers over the edge into amazingness.

If you’re really hungover and need something to mop up last night’s over-indulgence, you might try the “Slayer.” The Slayer is a beef patty on a big sloppy pile of chili, monterrey jack cheese, cherry peppers, andouille sausage, fries, carmelized onion, green onion, and “ANGER.”

Also at Kuma’s you will find a selection of local beers and local ingredients as the owners do their best to support local farmers and brewers in the area. They also donate to a “charity of the month” and encourage their customers to donate as well.

Another highlight of our trip was exploring the shops in Chicago’s hipster neighborhood of Wicker Park on N Milwaukee Avenue. I found a vintage Cyndi Lauper True Colors Tour T-shirt that I cherish to this day.

We had a great time with Al and his friends, and then we had to make time for some inevitable tourist activities.

We thought about going up in the Sears Tower, but after consulting our guidebook, it sounded like a long wait in line for an overrated view that might be just as great from the Hancock Tower. So we opted for that. We were glad we did. The views were spectacular, really giving you a sense of how massive the city of Chicago really is. Also, you can see the Sears Tower in the skyline view, which is a pretty central part of the Chicago skyline. If you’re in the Sears Tower, you can’t see it. We recommend the Hancock.

More views from The Hancock:

We also had a nice stroll on the waterfront park, where we randomly ran into one of my old college friends who happened to be visiting as well. It was a pretty crazy coincidence.

We stopped for lunch on Navy Pier at the famous Billy Goat Tavern made famous by the John Belushi and Dan Aykroyd SNL skit (“Cheezborger! cheezborger! No fries, cheeps!). It was an experience, but wildly overrated. My chicken burger was a bland chicken breast cooked on a grill and slapped onto a plain naked bun. I can’t remember if there was even cheese. All condiments were self serve. And don’t forget the chips in a bag. Minimal effort, minimal flavor.

Below: views of the waterfront from Navy Pier

The last big highlight of our trip was Millennium Park. We loved all the larger than life sculptures, specifically “the bean” aka “Cloud Gate” by British artist Anish Kapoor.

Lastly, we had to try out Chicago’s famous deep-dish pizza at Pizza Uno. It was pretty good, but felt more like a tourist trap than anything else. It was packed with tourists but we managed to squeeze in at the bar and avoid the wait for a table. The crust was good, but the sauce and toppings were a little on the bland side. We have a feeling that there is much better deep dish pizza in Chicago, and if we return, we’ll be looking for it.