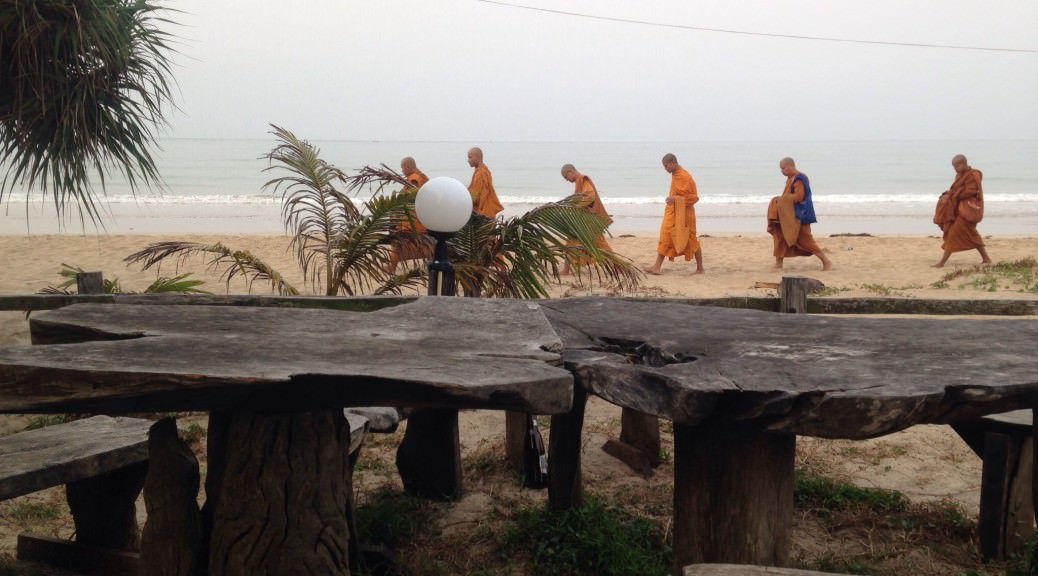 Chanthaburi, Thailand: getting off of the beaten Western tourist path and enjoying a Thai vacation spot. Fantastic food, a great beach, and a cute little town with a lot of history.

We traveled to Chanthaburi and Chao Lao Beach in Thailand in March 2014 to visit Saisuporn, a friend of mine from my exchange student days in Denmark during my junior year of high school. She is Thai, and was an exchange student from Thailand to Denmark on the same program with AFS. I’d last seen her in Denmark in 1998, when we were 17.

Chanthaburi is definitely off the beaten path for western tourists. It is very popular with Thai tourists, however–especially Chao Lao Beach. If you are looking for a more authentic Thai experience and still want to visit a nice beach, Chanthaburi and Chao Lao Beach is a great option. It is easy to take a bus there from Bangkok, and you won’t find the inflated prices of the touristy beach areas of Thailand. You also won’t find luxury hotels, so set your expectations accordingly.

We took the 8:30 bus to Chanthaburi from the Ekkamai Eastern Bus Station In Bangkok. The bus was nice, air conditioned, and had a toilet. I think the tickets were $3.00 each and included a bottled water and a small snack of crackers.

When we arrived in Chanthaburi (a 3 hour bus ride that was actually a 4 hour bus ride), the driver thought we were getting off at the wrong stop. That’s how few westerners travel here, apparently. We collected our bags, and I successfully used a Thai pay phone and a squat toilet.

Saisuporn and her husband picked us up and took us to lunch at one of their favorite local restaurants. Lunch was outstanding, including fish stew, fish salad, Chanthaburi style pork curry, coconut tapioca custard, and a sweet tea drink made from a flower that changes from blue to purple when lime is added. It was all delicious.

After lunch we walked around Chanthaburi with Saisuporn. Chanthaburi is known for its gem markets–particularly sapphires. We walked past a gem market where people were sitting with special magnifying glasses and purchasing gems.

After that we walked past the old town with 100 year old buildings dating back to a brief French colonial period from 1895 to 1905.

We visited an historical museum, and then walked to the Catholic church in town where Saisuporn and her husband Golf were married. They actually had two weddings–a Buddhist ceremony with her family and a Catholic ceremony with Golf’s family.

Saisuporn took us back to her house where we met the rest of her family and her two children. They have a very nice house.

Saisuporn had to feed her baby, so Golf took us to a local market to do some shopping. He introduced us to durian chips, which were quite tasty. They don’t smell like the fruit. When we told him we liked them, he drove us to the house of some people who make them and we bought a couple bags of their homemade chips to take home. The durian chips made by the local durian farmer were especially delicious.

It was getting late in the afternoon and Saisuporn drove us to her family’s resort on Chao Lao Beach, Baan Imm Sook Resort. Her mother-in-law built the resort five years ago, and you can see the love that went into it. The guests are usually Thai tourists–Saisuporn said that we were the first Americans to ever visit their resort. We felt honored.

The resort has a series of small and large bungalows for families and couples. We had a very cute and modest bungalow with AC, a fridge, bathroom, and full size bed. There was a computer for guest internet use in the lobby, but we were able to get a wifi signal on our phones in the lobby area.

Once we were settled, we said goodnight to Saisuporn and went looking for dinner. There was another resort next door on the beach that had a rooftop restaurant. It was busy, and we decided to check it out. We had a very spicy papaya salad with salted eggs, and some fried curry soft shell crabs. Both were amazing. The papaya salad reminded us to remember tell the server to make it mild, it was really spicy.

The next morning we got up and went to breakfast at the breakfast area near the beach. Breakfast was included in the rate and had a bunch of options. The eggs in the shape of hearts and stars were especially cute. There were also Thai breakfast options like jok (a savory rice porridge), stir fry, and coconut doughnuts. Everything was great.

Saisuporn picked us up late morning and we made a stop back at her house to pick up her mother who was visiting from Bangkok, Golf, her daughter Imm, and her nephew. We set out on a drive out of town a ways to an estuary where we got in a small boat that ferried people to a restaurant. We passed many shellfish farms and fishing shacks along the way.

We arrived at the restaurant, which was full of Thai tourists eating delicious-looking seafood. The name of the restaurant was in Thai, but Saisuporn told us it translates to “Soft Shell Crab Farm” in English.

We were seated and we told Saisuporn and her family to order whatever they thought was good. We eat all things seafood. While food was on order, I took a little walk to the bathroom and snuck a peak behind the scenes. The kitchen looked like no restaurant kitchen I’d ever seen. Don’t let the disorganization freak you out, the food coming out of that kitchen was nothing short of fresh and amazing.

After lunch Saisuporn took us to the nearby Namtok Phliu National Park to see the Phliu Waterfall. On arrival, there were many vendors selling drinks, snacks, and the longest green beans I’d ever seen. Saisuporn bought some, she said they were for feeding the fish.

The park was busy with families. We visited another waterfall park later in our trip, and it appears that these parks are very popular with Thai families as kids can swim in the shallow water, and picnic facilities are available. There were lots of people feeding the fish the giant green beans. I’m not so sure the fish needed that much food, but Saisuporn said it’s not always this busy. One can only hope that the fish wouldn’t overeat themselves to death on all the green beans.

The waterfall hike wasn’t very far at all, but the heat and humidity were intense. We headed back to Chanthaburi and then Golf drove us back to the resort.

For dinner that night, we walked up the road to a little local restaurant. There were several little stores and restaurants in walking distance from the resort.

We picked a place that was busy but not too busy, and to our relief they had a menu in English as well as Thai. We had a fried papaya salad (the papaya is deep fried before tossed with the salad) and a squid dish. It was nice and light after a such a huge lunch. 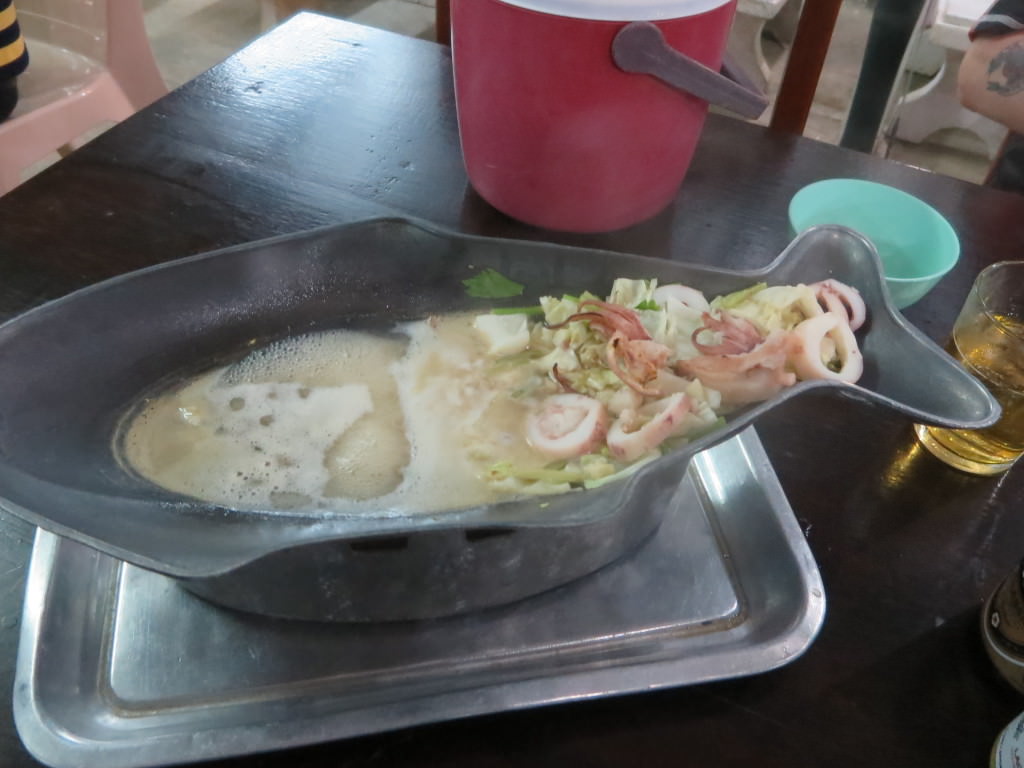 There were geckos everywhere. Don’t fear the geckos. They eat mosquitos and other bugs. And they’re cute and they chirp. 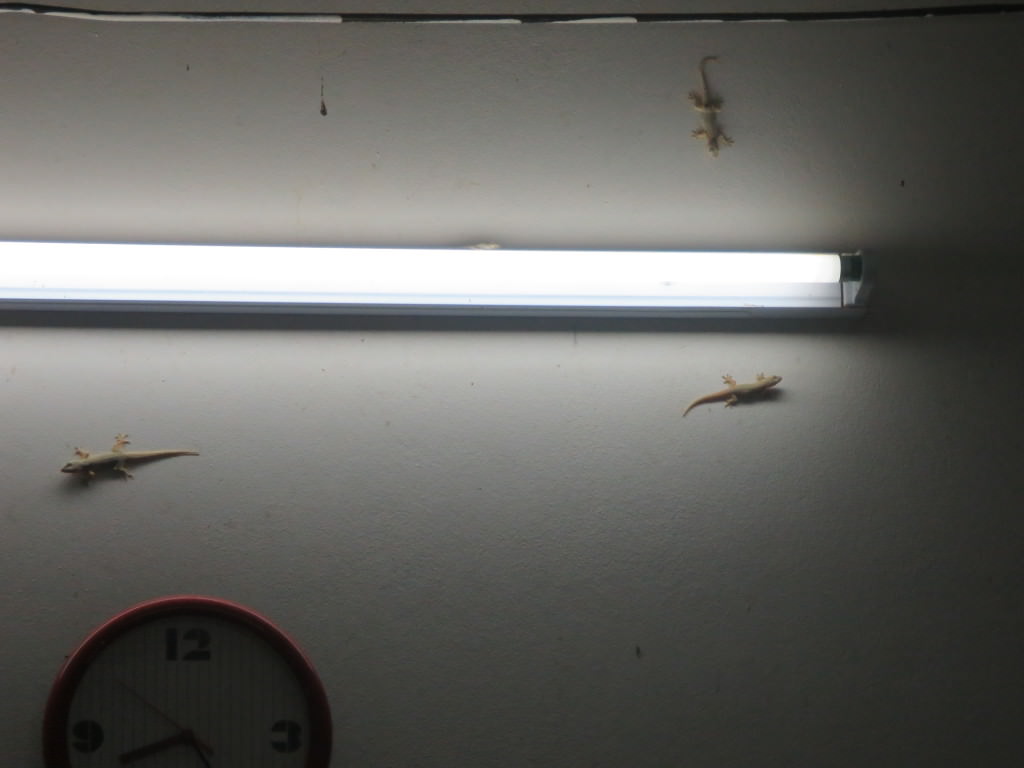 That night it began pouring rain with thunder and lightning. We enjoyed listening to the storm while reading in bed. At around midnight we were woken up to a thunder clap so loud it shook the bungalow. It must have been directly above us.

The next morning we went and waited for breakfast to open as we had an early bus to catch back to Bangkok. While waiting on the beach, some monks walked by on a morning beach stroll.

We had planned on going back to the bus station we arrived in on, but Saisuporn took us to a different bus station that she said her mother recommends as she travels from Bangkok often. She said it was safer because the drivers go slower. The cost was the same, and the bus station was a little nicer. Our bus arrived and we thanked Saisuporn for a great tour of Chanthaburi. 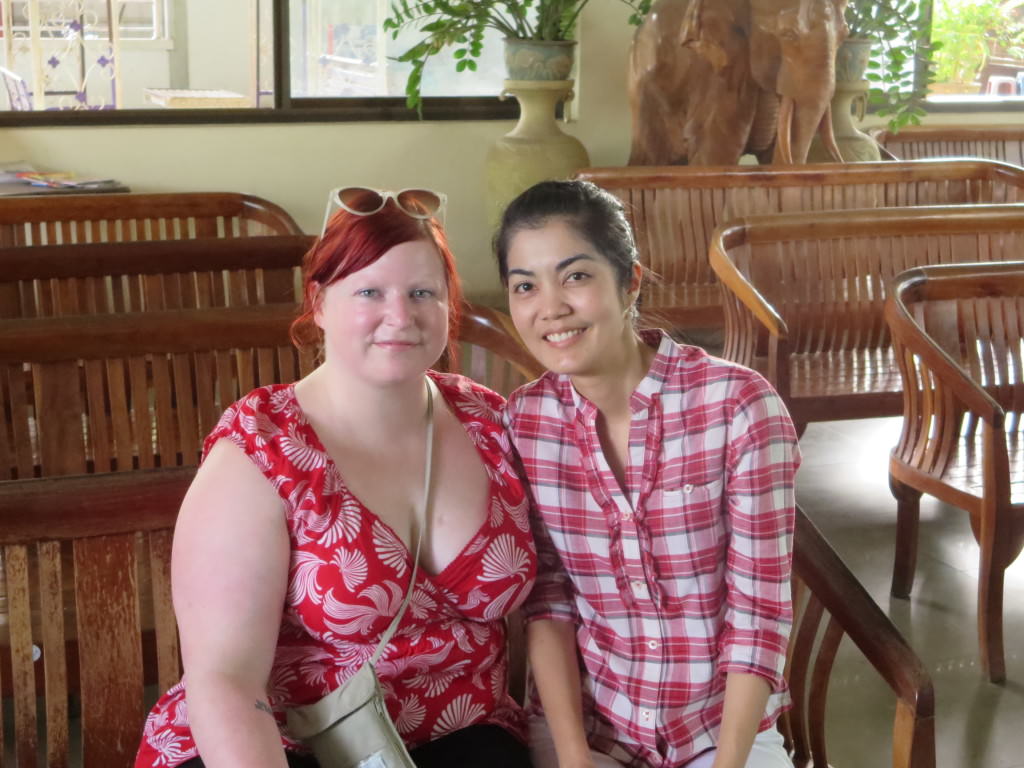 Then we got on the bus. While the bus station was nice, the bus was another story. The bus looked about 20 years older than the one we came in on. This wasn’t really a big deal as the seats were still comfortable. However, 10 minutes into our journey the bus started bouncing up and down. The driver pulled over, did a looksee around the bus and tires, and continued on. The bus bounced along. The driver got on his cell phone, which we knew wasn’t a good sign. Finally, he pulled over at a tire store and went over and talked to the guys that worked there. They gave him a newspaper, and he took off his shirt and scooted under the bus. A few minutes later, he came back and talked to the guys again, who gave him a piece of wire. He climbed back under the bus for a few minutes, and then we were back on our way. The bouncing was lessened, but there was now something rattling around under the bus the whole way back to Bangkok.

Miraculously, we made it to the outskirts of Bangkok in record time (I think the driver was going as fast as possible because he figured the wire would give out at any moment). He pulled over on the freeway where some shuttles were parked and directed everyone into the shuttles. Some enterprising taxi cabs began swooping in like vultures to pick off the passengers of the dying bus carcass, and we opted to get in one of those instead.

Sketchy bus rides aside, we had a great time in Chanthaburi, and we wished we had a little bit more time to enjoy Chao Lao beach and get to know the town better. It was so great to see Saisuporn again after all those years and meet her lovely family. We would definitely go back and visit again.