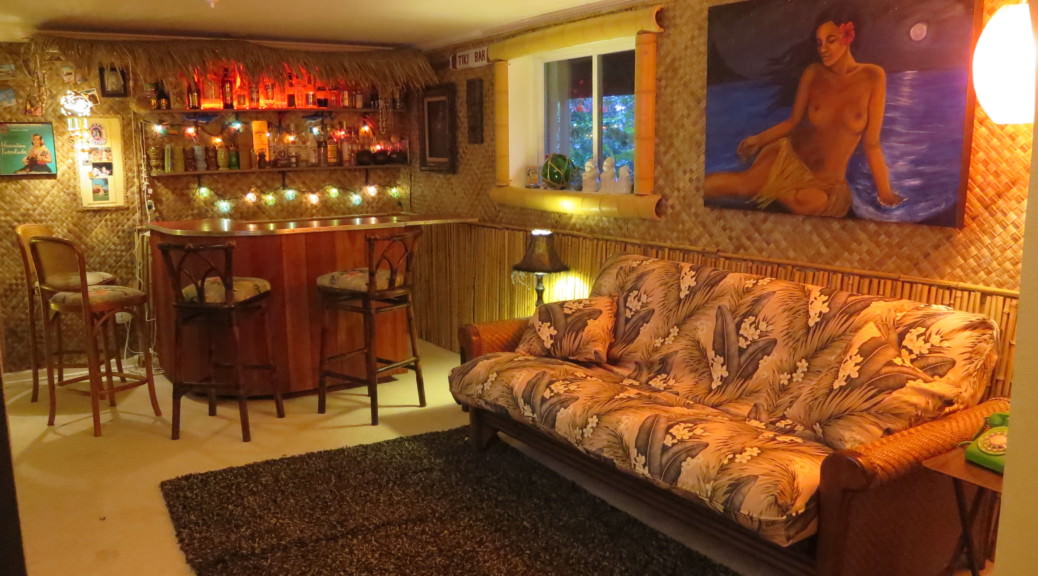 Building a basement Tiki lounge: How we turned our drab basement into a retro tropical Polynesian retreat

I’ve always had a fascination and appreciation of Polynesian culture. I studied art and anthropology (including Pacific Island cultures) at the University of Hawaii Manoa on a year long program in college, and fell in love with Polynesia. We were fortunate enough to take our honeymoon in Tahiti and French Polynesia in 2010, and I’ve been itching to go back and explore more islands ever since.

When we decided to buy our first house last year, Paddy had a requirement that it needed to have a basement–with a bar. I was 100% in agreement, but it had to be a tiki lounge. We love the kitsch and retro nostalgia of the tiki bars of the 50’s and 60’s, when Hawaii’s statehood came to be and a booming post WWII economy allowed Americans to travel more. Polynesian culture and tropical exotica became all the rage, with restaurants such as Don the Beachcomber and Trader Vic’s in California starting a nation-wide trend of Mai Tais and Zombie cocktails, “exotica” music and tropical fashion.

As luck would have it, we got a house with a basement. A finished basement at that. It was a dream come true.

The quintessential item in a tiki lounge is a bar.

Scouting Craigslist, we came upon several retro bars for sale but the prices were either exorbitant or they sold so fast that we didn’t stand a chance. I finally found a bar for $200 that looked cool, but the photo was terrible. It was covered with stuff, and taken at a bad angle. It looked like it might be cool, or at least we could make it cool with some work. I noticed it had been on Craigslist for awhile, so I finally emailed the guy and offered him $100 for it. He told me he was selling items from a family estate far from where he lived, so he didn’t want to go there unless we were definitely going to buy it. We decided to go for it as long as I could get it in my truck, and settled on $150. It was an awesome bar, in an awesome basement that hadn’t been redecorated since the 1960’s. There was even a rotary dial phone on the wall in the laundry area. We had a hell of a time getting it out of their basement through the garage, and strapped it rather precariously into my truck with rope, but we did it and the vintage bar made it back to our basement.

We already had a couple of vintage bamboo bar stools that Paddy had acquired somewhere down the line, and we found a couple more rattan bar stools and a bamboo/rattan style futon on Craigslist as well, which we ordered a new tropical cover for and matching pillows. We had a lot of unpacking to do and other more pressing home projects, so we hung up our tiki bar paddle, a few vintage framed records from Hawaii and Rarotonga, and called it good until we had time and energy to deck it out.

About 9 months went by, and finally we were ready to start finishing our tiki lounge. I wanted to go all out.

First, I measured the back wall of the room and the wall area behind the bar, and ordered several rolls of Lauhala matting (woven grass mats) on ebay (I found the best price on 48″ x 96″ rolls there), and four rolls of 36″ x 72″ natural bamboo fencing from Home Depot. We screwed the Lauhala mats to the wall, cutting out a section around the window. I used a stud finder to find the wall studs on the wall behind the bar, and marked them on the crown molding with masking tape so that we could easily find them later when we installed the bar shelves.

The matting was hard to keep completely flat, so we struggled a bit with some bubbles that kept appearing when we were installing it. We got it about as flat as we could.

When cutting around the window, it was hard to keep a straight cut line. Fortunately, we planned on covering the window frame with bamboo, so my bad cutting job would be hidden eventually.

I had to cut out around an electrical panel next to the bar as well, and it didn’t look so awesome with the frayed grass mat edges. I got a roll of Lauhala ric rac on Etsy for $15.50 and used it to frame the edges around the electrical panel by gluing it with a hot glue gun. It looked much better and kept the cut grass from fraying any further. We did a border trim along the top of the matting on the wall as well, which gave it a more finished look.

Next, I ordered a 30″ x 96″ Mexican palm thatch runner from Forever Bamboo. We were trying to figure out how to create an overhang behind the bar that we could drape grass thatch over to give it that authentic tropical tiki lounge look. I drew up a plan of a frame we could construct and hang on the wall, but Paddy thought we could find something pre-made. I couldn’t find anything small and pre-made online. While we were pondering this conundrum, I remembered that there were some closet bars in a storage room in the basement installed by previous owners. It was perfect! I was stoked–we didn’t have to buy or build anything!

At first we thought that hanging the supports upside-down would be best to give the bar the sloped-overhang we originally pictured. 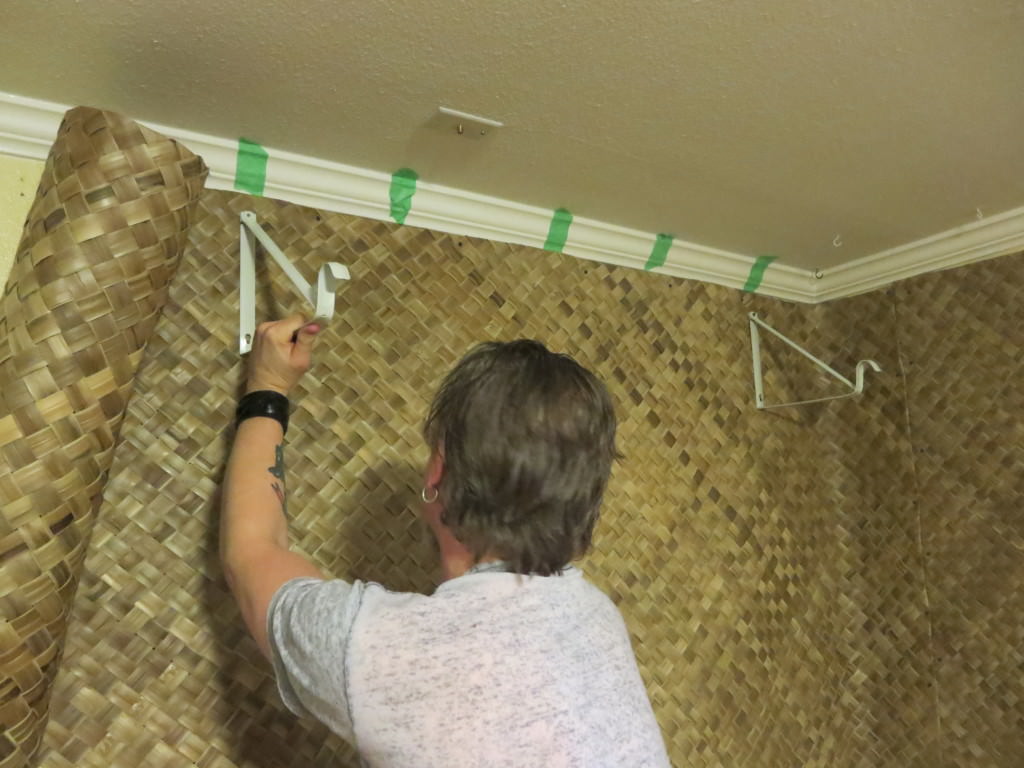 Unfortunately, while this looked cool, it would have been better on a very high ceiling. It covered up too much of the wall that we planned to use for bar shelves.

We put them right side up, which helped hold it up a lot better.

Next we un-rolled the fencing and propped it against the wall and then Paddy screwed it to the wall below the matting. We had one electrical outlet we had to cut bamboo out of, but fortunately it was very low on the wall and we only had to cut a couple pieces off at the bottom end of the second roll. Paddy was able to do this (carefully) with a small hand saw.

As luck would have it, we had a couple pieces extra on the end of the last fence roll, so Paddy cut the wire holding them on and took them off. We screwed them to the wall above the fence roll to create a border and a more finished look. 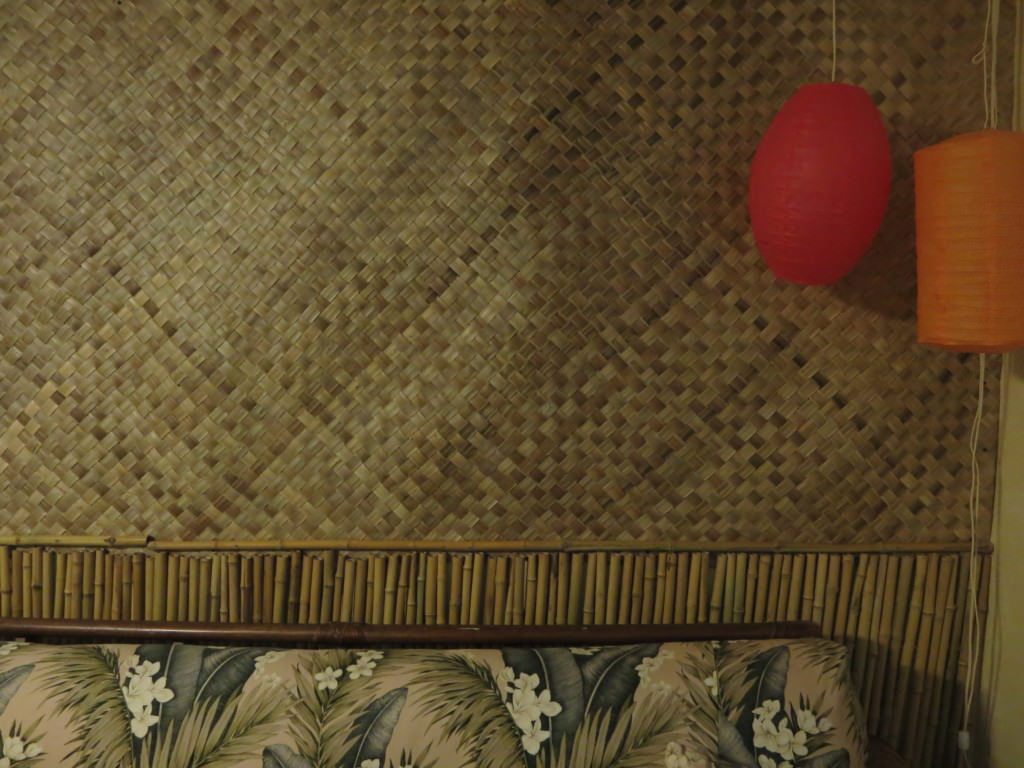 Next, we got some inexpensive brown shelves and supports from Home Depot and screwed them into the wall studs behind the bar in front of the matting. The top shelf still wasn’t very visible with the grass overhang, and it was bothering us. It was also hanging at about eye-level and was very annoying if you were behind the bar.

We remedied this by getting two thin pieces of tack board cut 18″ wide by 48″ long (our bar overhang was 96″ long), which Home Depot cut to size for us, and put it under the grass to give it a wider “shelf” to hang over. It worked perfectly.

After the bar was set up, we had to do something about the window frame and my bad matting cut-out job. I ordered a four-pack of 60″ long 5″ diameter split bamboo poles from Sunset Bamboo. Unfortunately they sent us full rounds, and it was a several week ordeal with a call tag and a reshipment to get the right items, with very poor customer service. We finally got the right product though.

Two of the 60″ lengths we were able to install over the window frame on the top and bottom without cutting, and the middle ones we cut to size with a chop saw. We put screws in the wall and the window frame and wired the bamboo poles on, so that they would be easy to take off if we ever wanted to.

We were finally ready to decorate. The best part.

We added some fun lights that we got from the party supply store below each shelf behind the bar–bouys and parrots. To illuminate the top shelf, we got the Dioder LED 4 piece light strip pack from Ikea for $29.99. You can daisy-chain them together like we did for behind a bar, or seperate them out into four segments to put inside book cases. It was an awesome purchase. You can choose from a rainbow of colors, or make the lights fade in and out of each color with a handy little control.

A guy in a nearby neighborhood had a “tiki sale” at his house where we picked up some vintage tiki mugs, a poster, a really cool vintage bamboo chair, and some postcards from Hawaii and Tahiti from the 1960’s. No tiki lounge is complete without tiki mugs.

I got red and orange paper lanterns and pendant lights from Paper Lantern Store which added some warm funky ambiance to the room. The lime green rotary dial phone in the photo below is the phone I grew up with–and I’m so glad I kept it. It sits proudly in our tiki lounge in all of it’s lime green glory. 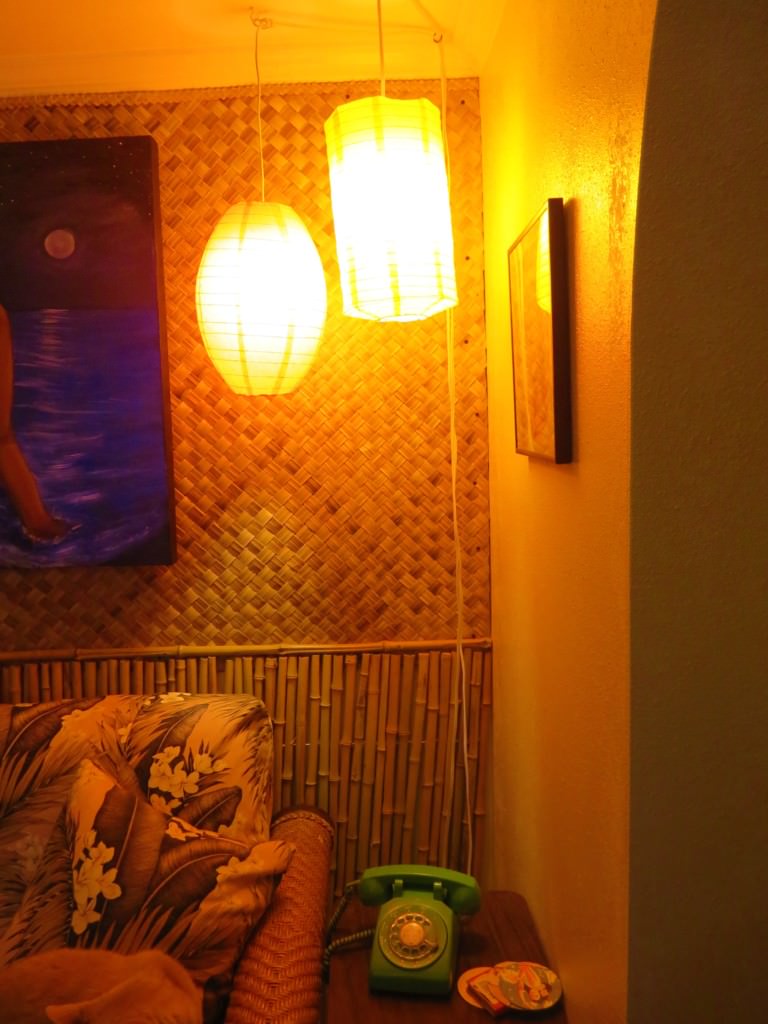 Shortly before we moved, I found this tiger print chair sitting front and center on display at the Ballard, Seattle Goodwill. I had to have it. The Goodwill employee I had write a furniture sale tag up for me said there was a lady who told her she was coming back for it. But she didn’t pay for it. And I had cash and a truck. I win. 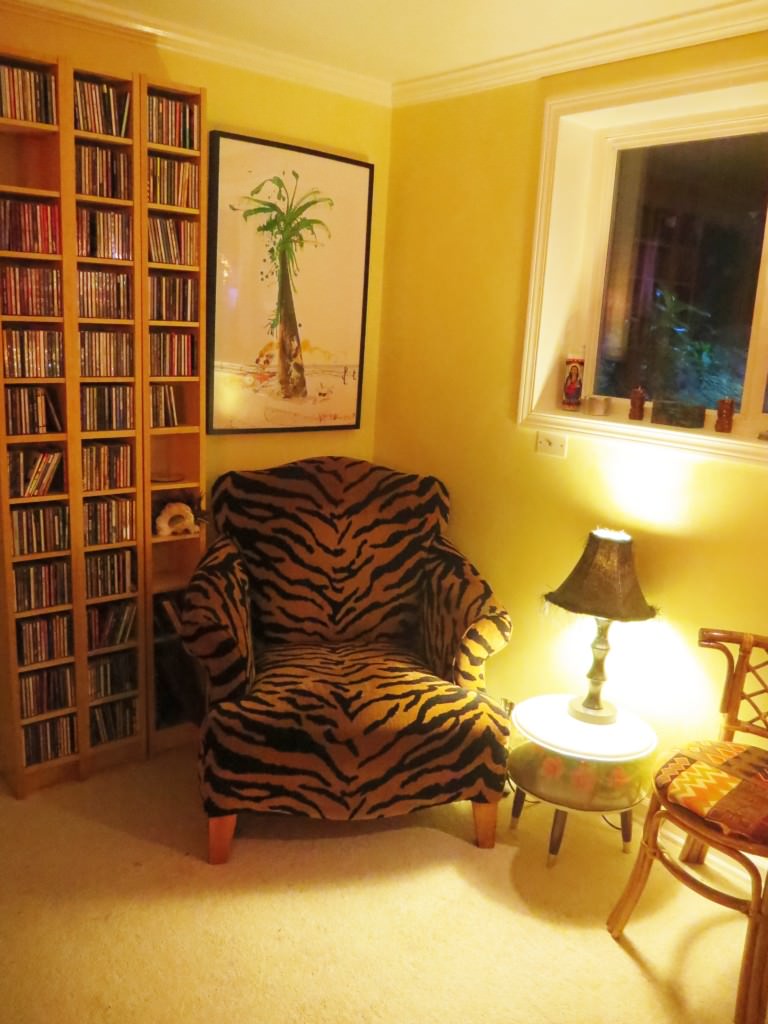 We found a pretty cool coconut lamp/chandelier  in Mexico, and a preserved puffer fish at a nearby antique mall in Burien, WA. We got a tiki mask at Home Depot and some glass floats at Party Display and Costume. 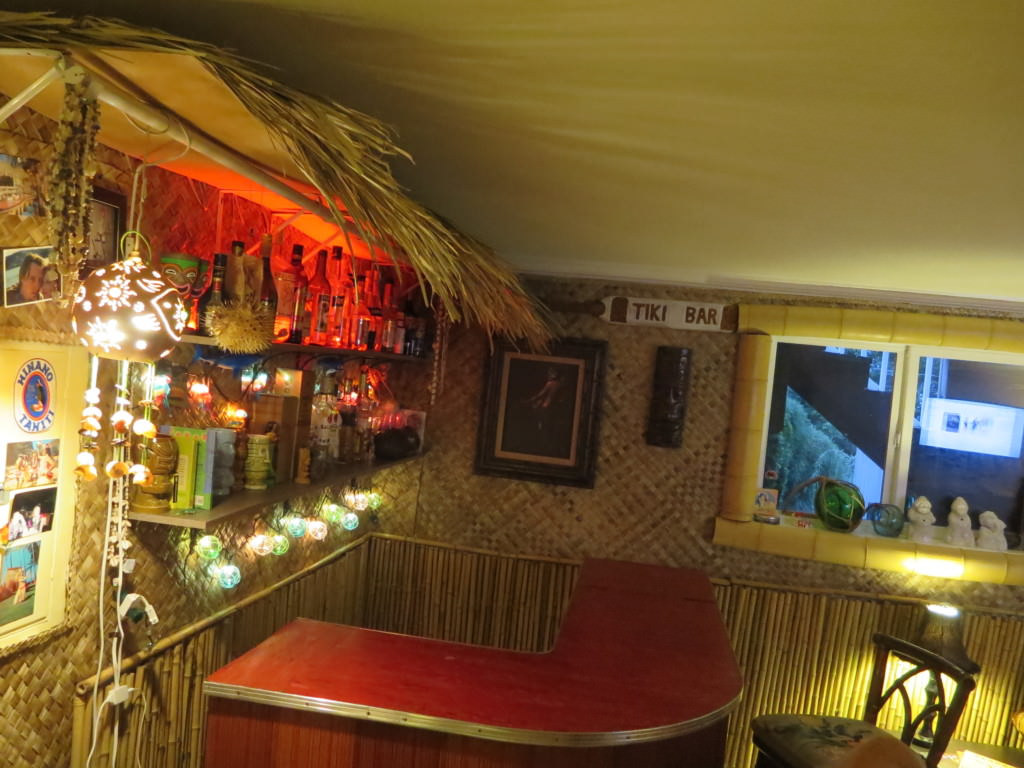 I re-covered all the bar stools with Tommy Bahama fabric from Joann Fabrics so that they would match.

My last addition to the bar was a painting of a hula girl in the moonlight that I painted myself. 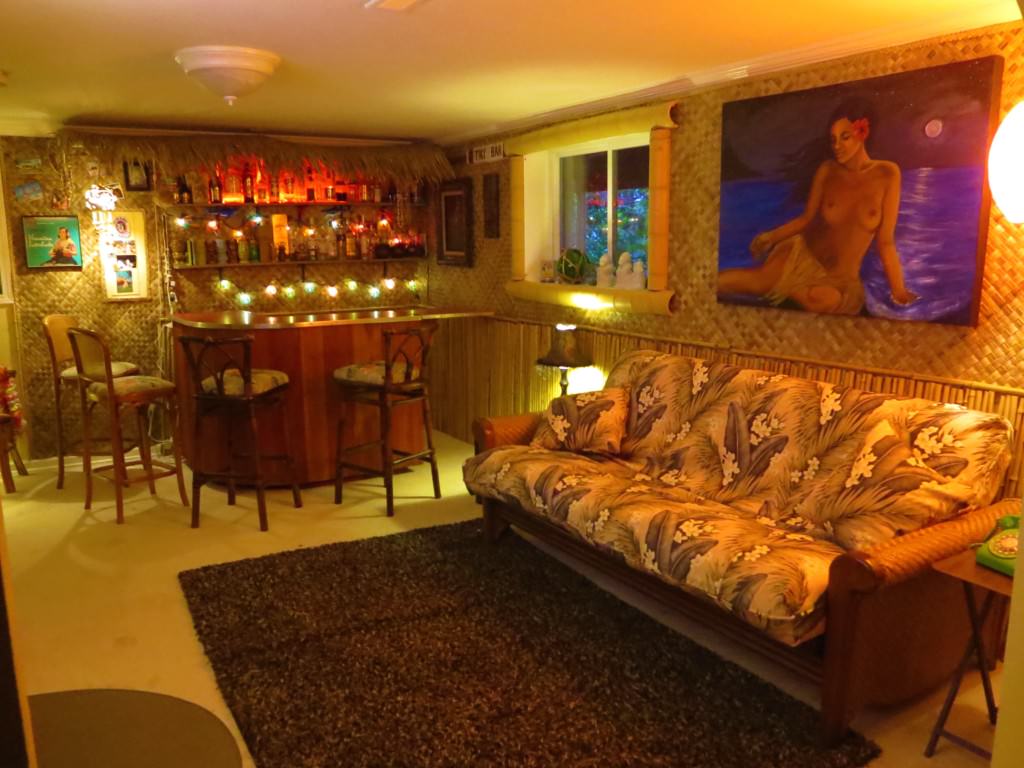 We would like to re-do the floors in wood laminate next year and get rid of the old carpeting, and get some tiki god side tables to replace the boring ones, but for now we’re going to call it good. We finished the tiki lounge just in time for a Forbidden Island party we threw and it was super fun.

One of the biggest elements of a great tiki lounge is kitsch. As years go by, I’m sure we will find all sorts of things to add to the bar in our international travels and wanderings through antique malls. Our tiki lounge will always be a work in progress. 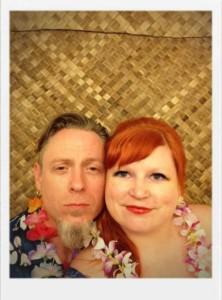 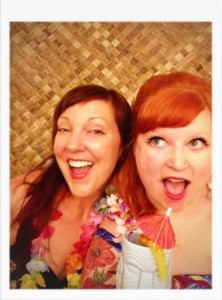 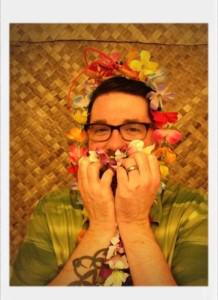 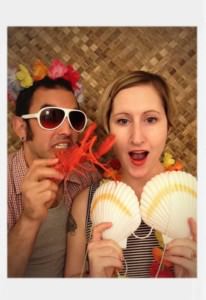 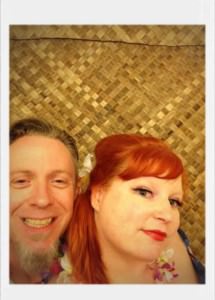 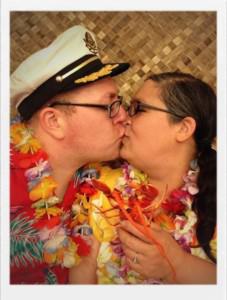 One thought on “Building a Basement Tiki Lounge”