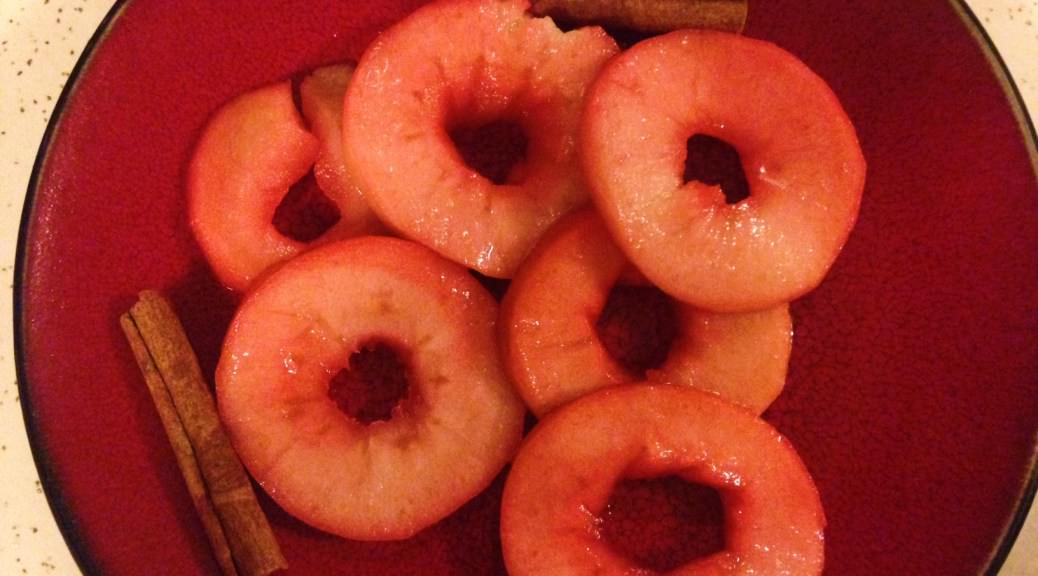 My Grandma always added store-bought spiced apple rings to her relish tray for Christmas and Thanksgiving dinners. My Mom never bought them, they were only something we ate on Christmas Eve at Grandma’s with her Christmas pot roast. Blood red, perfectly round, spicy rings that I never got to eat anywhere else.

When I told my Grandma that I was going to try and make spiced apple rings, she told me that she’d never considered making them from scratch, despite all the canning that she does. She was curious to see how they turned out. She said that she didn’t think anyone else liked them but her, and stopped buying them eventually. She was happy that somebody else enjoyed them at her holiday dinners.

I used this recipe found at Food.com. It says it makes 8 pints, but I bought a pack of 12 wide mouth pint jars and it filled them all. Also–total time 1 hour my ass. More like three.

I knew going into it that mine were not going to be perfectly round, nor blood red. I’m sure a lot of artificial red #5 dye goes into those store bought spiced apple rings. I also didn’t have an apple corer, despite searching for one at the local Fred Meyer.

**If this is your first time canning, PLEASE read all the instructions in the Ball canning guide. There is a lot that can go wrong if you don’t know what you are doing.

**Whitney’s note: Also get a squeezy bottle of lemon juice, you’ll need it to keep the apples from browning.

If you have an apple corer, this will probably go a lot smoother for you than it did for me. I cut the cores out of the apple slices by holding a knife in them and turning the slice around as I cut. If you can find an apple corer, buy it. It will be worth it.

I used Granny Smith apples, this is definitely a recipe you want to use tart apples for. 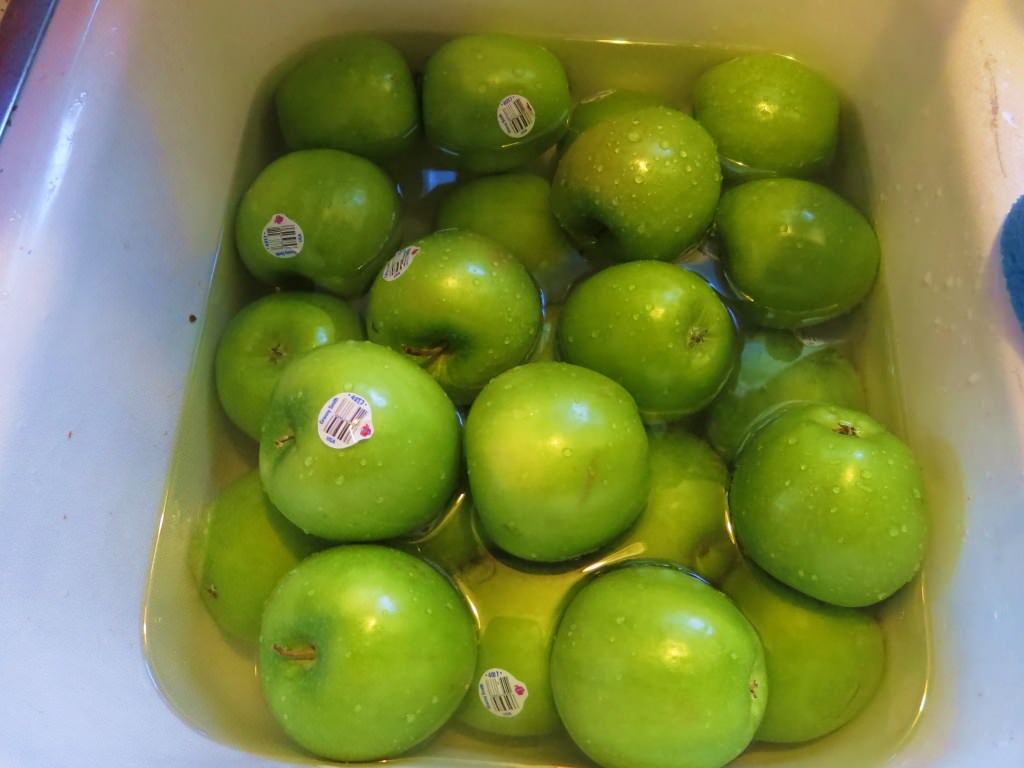 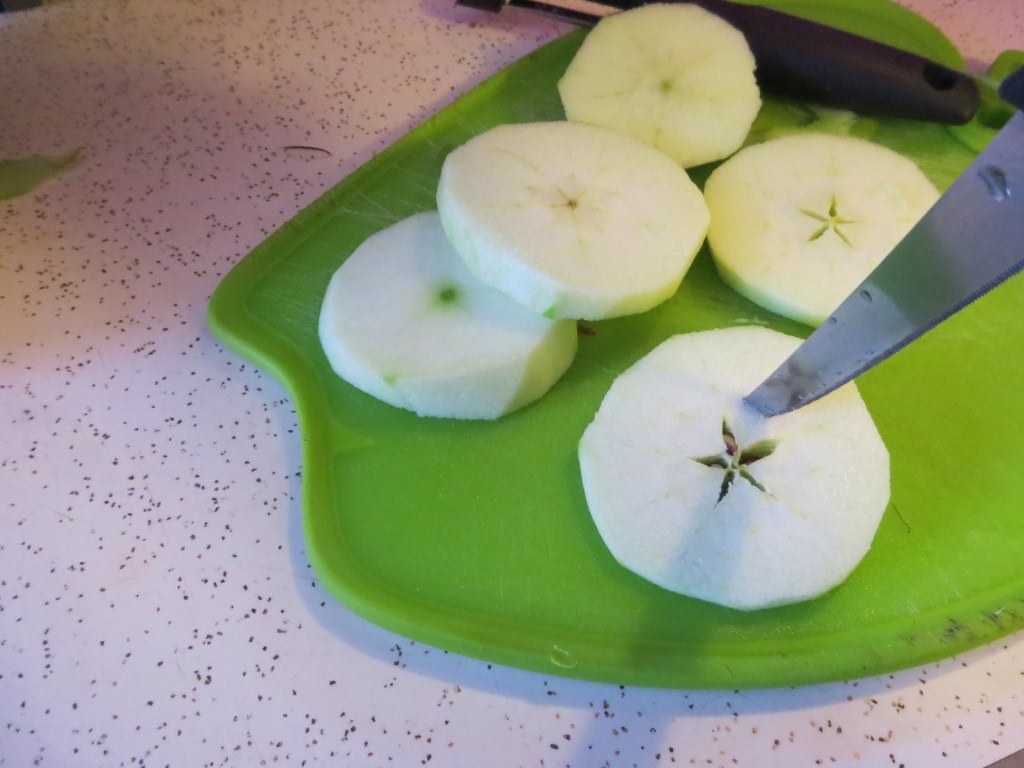 Place all the apple rings in bowls of water with lemon juice to keep them from browning. They will start to brown really fast so get them right into the lemon water immediately after cutting. 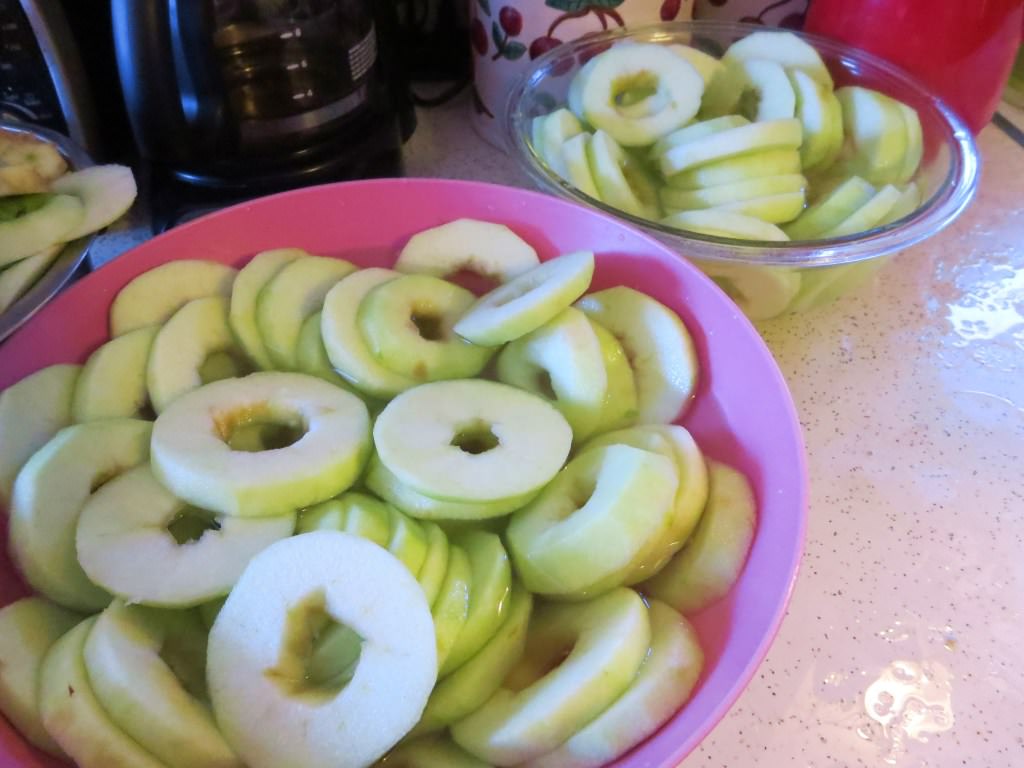 The recipe told me to throw everything in the pot and boil. I threw in a couple cinnamon sticks along with the red hot candies for extra cinnamon flavor. I did add the optional tsp of red food coloring.

If I were to do this recipe again, I would put the cloves in a “teabag” made from cheesecloth. They were just floating loose and when I was pouring liquid into the jars it was hard to keep all the cloves out. I suppose they could add extra flavor during processing and while the spiced apple rings are jarred, but it was kind of annoying. People also aren’t so into picking hard woody things out of their apple rings at the dinner table.

3. Heat to a boil, stirring constantly until sugar dissolves then lower heat and simmer 3 minutes. 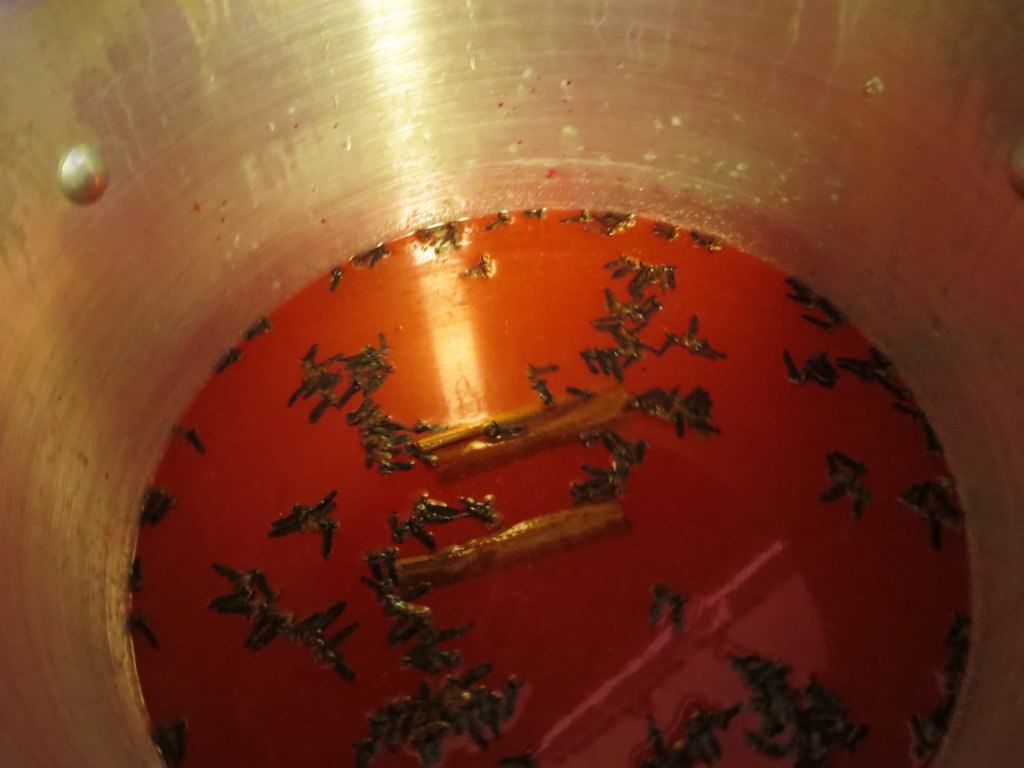 4. Drain apples and add to hot syrup, and cook for 5 minutes. 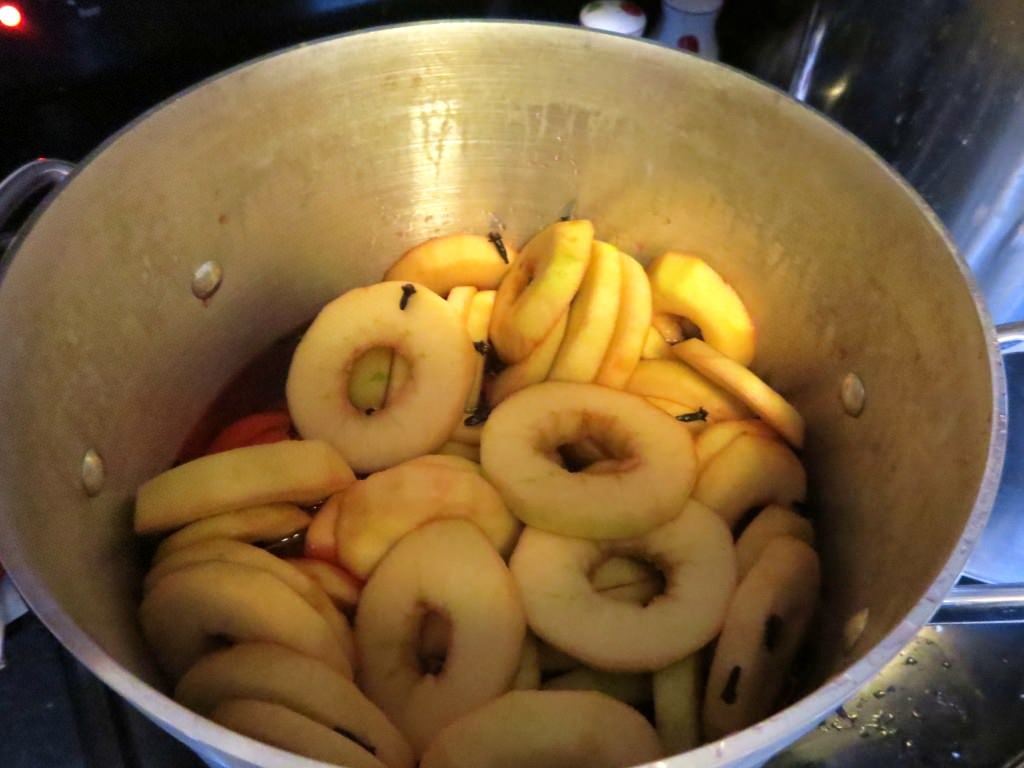 I wasn’t sure that cooking the apples for a whole five minutes prior to adding them to the jars was a good idea, because they kept cooking while I was canning. You don’t want mushy apple rings. Doing this recipe again, I would just steam them covered on low heat for 2 minutes, and then start the canning process. 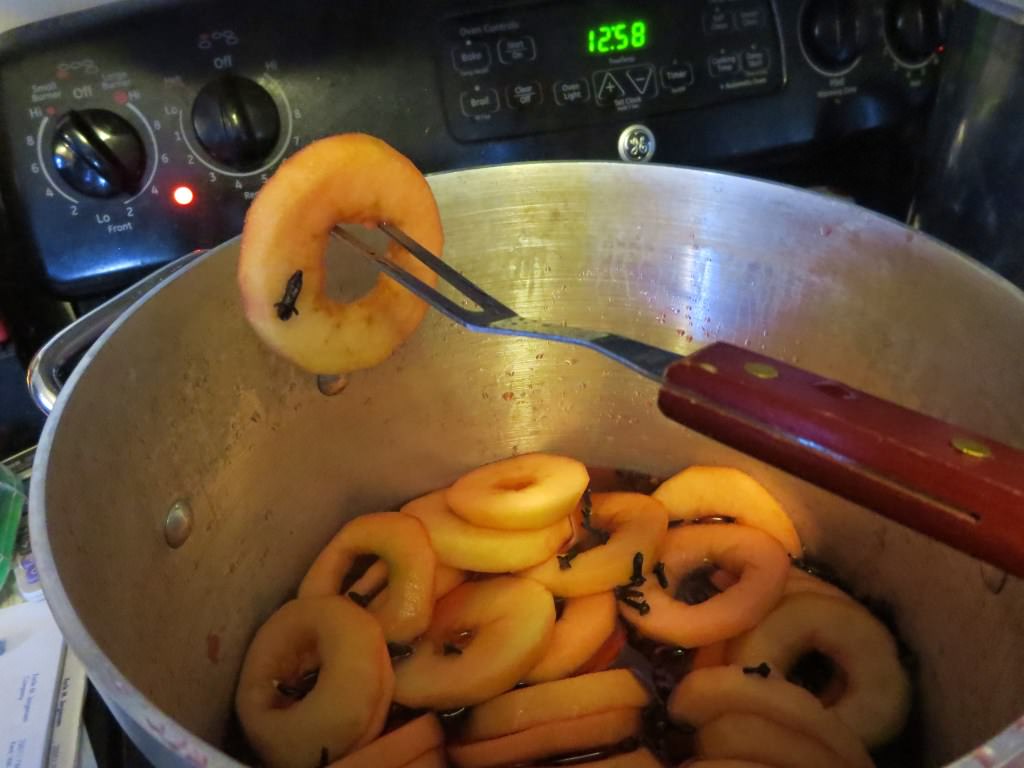 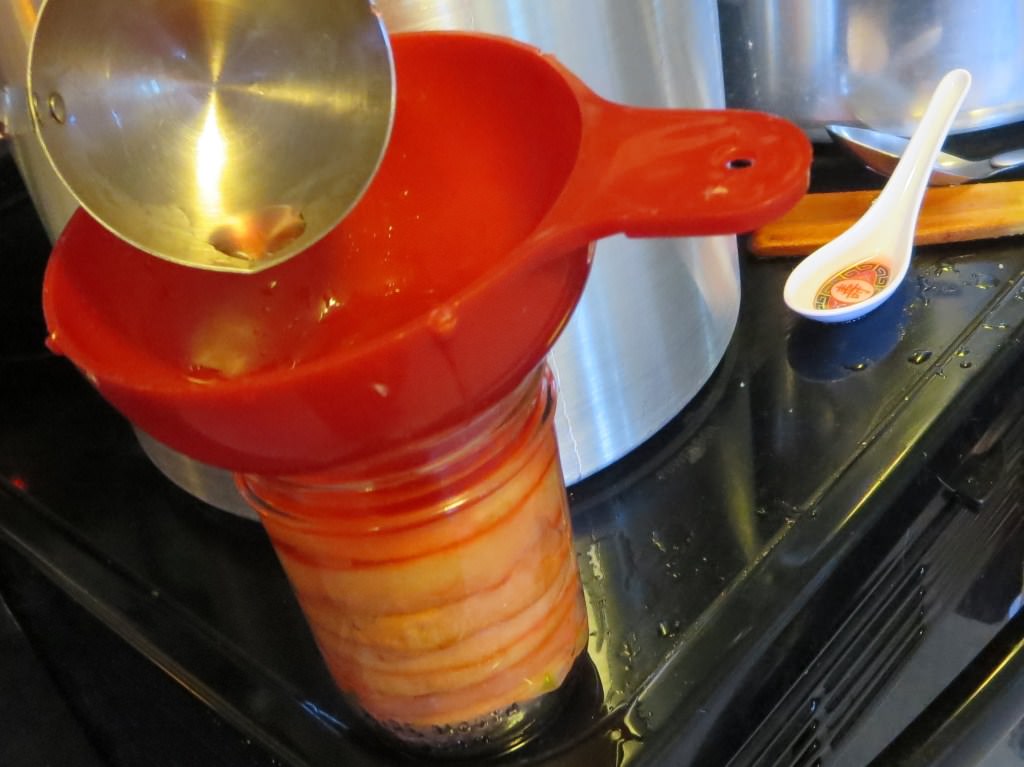 I found that the best tool for taking apple rings out of the pot and into the jars was a BBQ fork. I stacked the rings into the jars (doing my best to pick out the cloves as I went–again, cheesecloth recommended) and poured the syrup in on top. I pressed the rings down with a spoon to allow the syrup to fill all the spaces between the apples and remove the air bubbles. Do this until you have juice saturating the spiced apple rings, about 1/2 inch below the top of the jar and the air bubbles are removed. 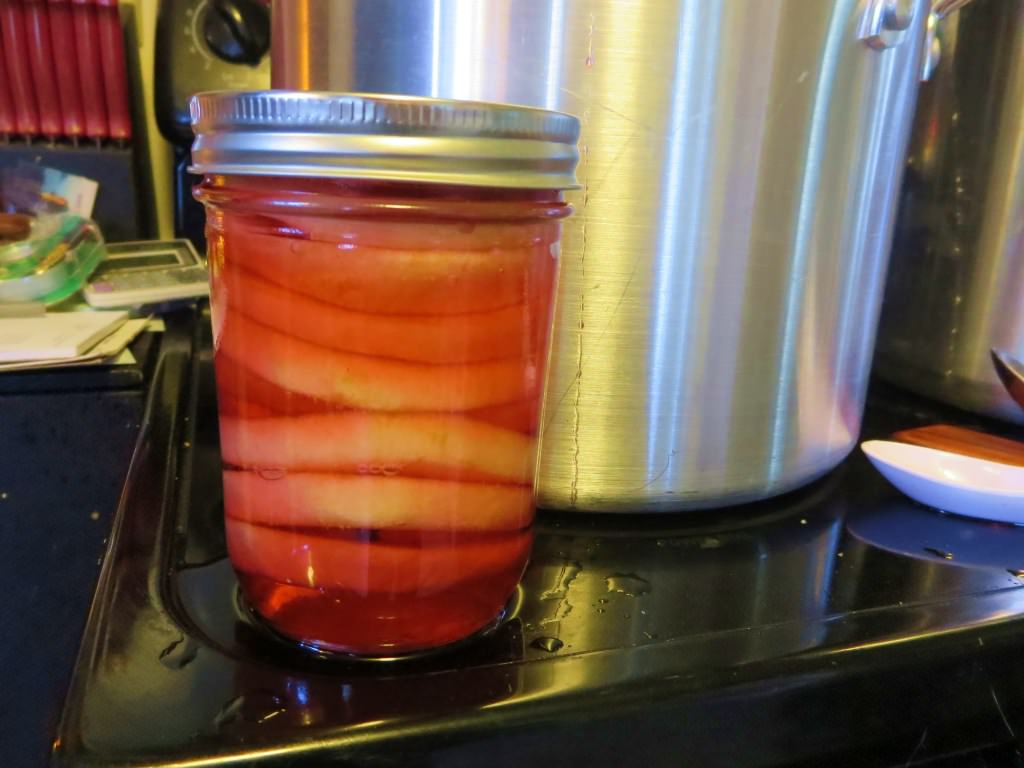 6. Check for air bubbles and add more liquid if needed to maintain the 1/2″ headspace.

7. Process pint or quart size jars in a boiling water bath for 20 minutes.

I live close to sea level, so I did 10 minutes processing time (starting the timer when the water started boiling) and 5 minutes cooling time (taking the lid off the canner and turning off the burner) as recommended in the Ball Canning guide for their recipes. They recommend 20 minutes water bath processing for higher altitudes. I’m not sure if my processing time was 100% correct, so I would recommend consulting Ball instead of trusting me. 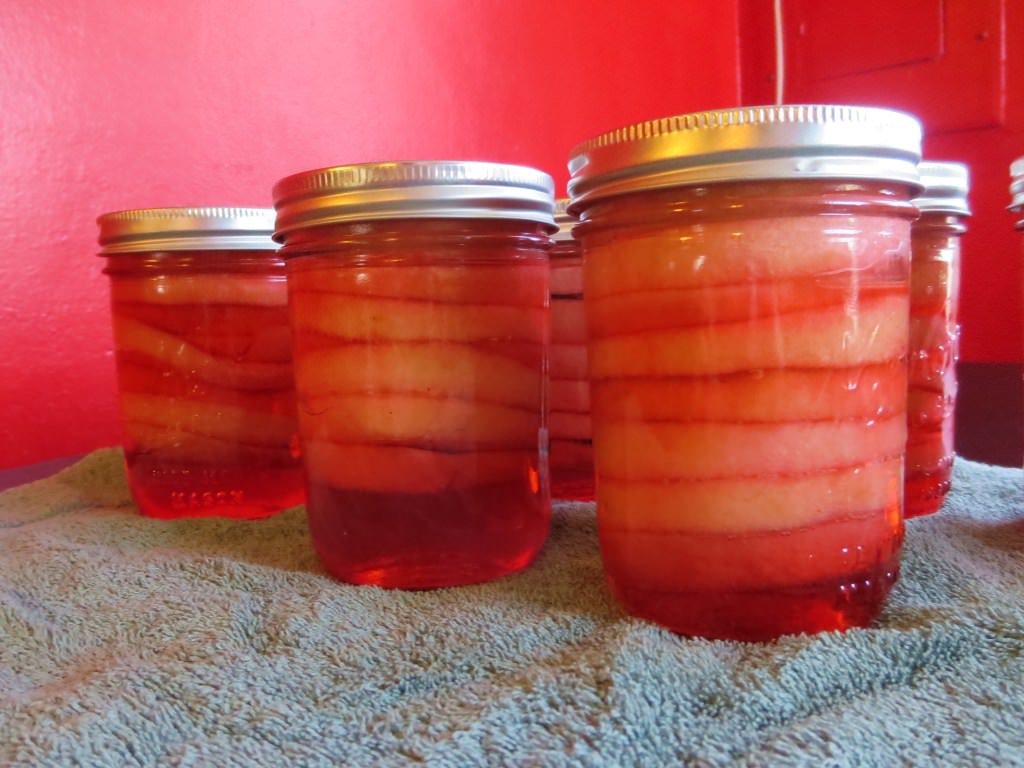 All of the jars sealed, but there were a couple that had such large rings in them that the syrup didn’t cover all of the apples. I put those in the fridge to eat soon, just in case something went wrong. I tasted the couple that didn’t fit into the jars, and they tasted great. I’m looking forward to having homemade spiced apple rings at Thanksgiving dinner this year. 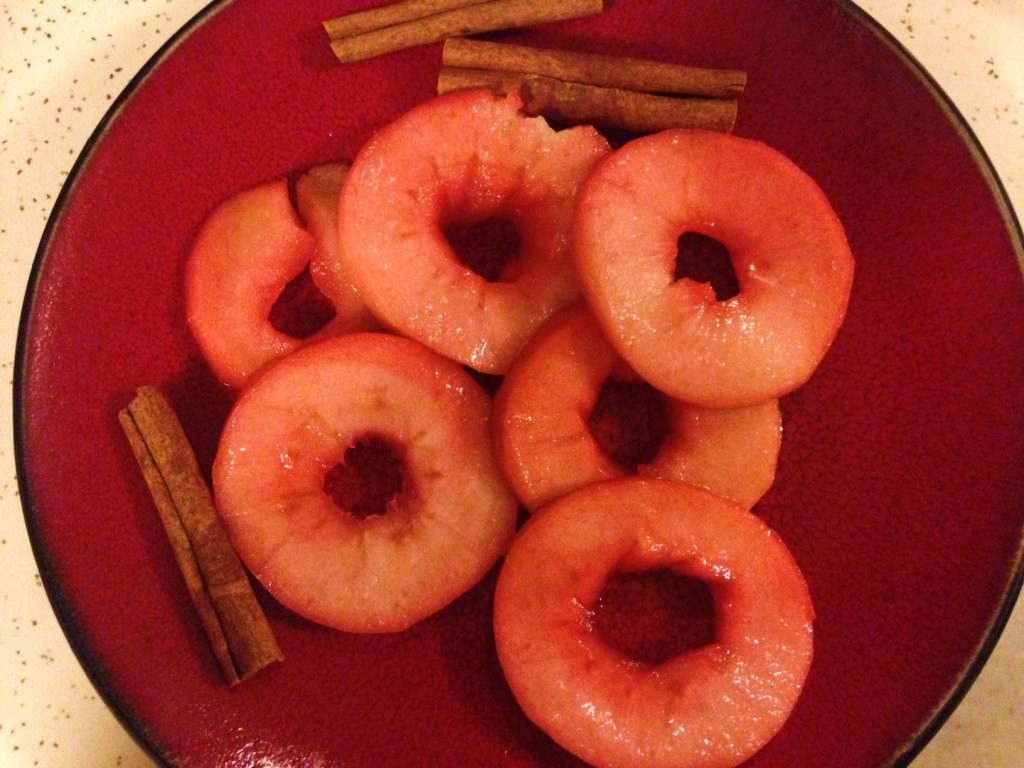 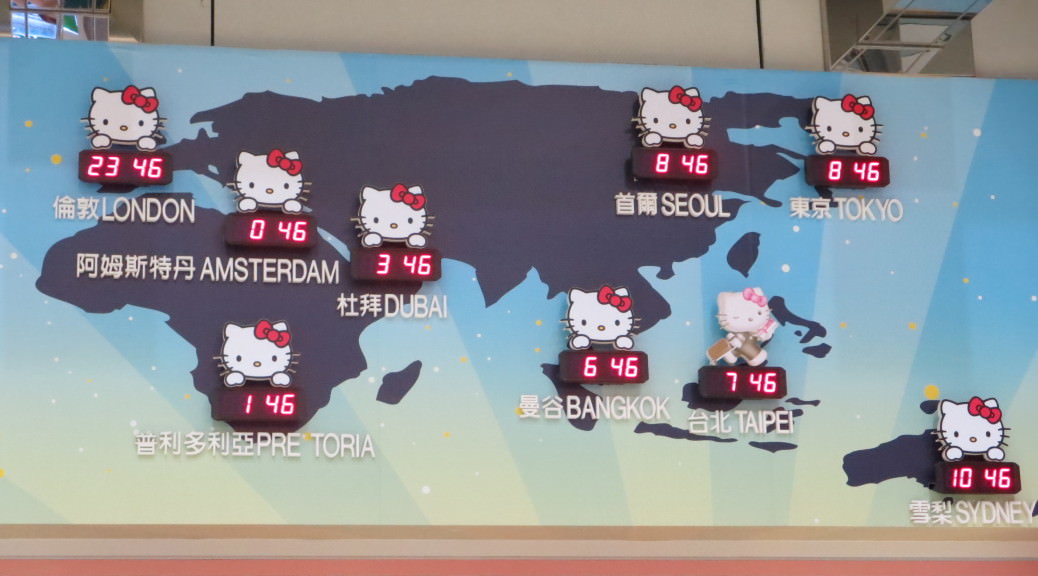 The two worst jet lag experiences we’ve had were our trips to Ireland (8 hour time difference) and Thailand (14 hour time difference). In Ireland, we couldn’t seem to sleep past 5:00 AM for the first four days, and my stomach was totally confused. Over the first week I’d be hungry but nauseous, feeling like I should eat something but nothing sounded good.

In Thailand, I felt like I adjusted to the schedule but would hit a wall and be dead tired at 6:00 PM every night the first week. Coming home was even worse, and I went through a week of fatigue and always wanted to go to bed at 7:00 PM.

Here are a few things that have helped us get over jet lag quicker and onto enjoying our trip (and helped us recover coming home).

1. Forget what time it is back home.

Jet lag is 50% psychological. If you wear a watch, set it to the time in your destination right when you get on the plane. Quit thinking “But it’s 2:30 AM back home!” when you are heading out to lunch. The sooner you accept and mentally adjust to your new schedule, the sooner your body will too.

2. Do your best to get a regular sleep schedule going.

This can be difficult if you’re on vacation, traveling around and going out some nights. If it works for your itinerary, try to go to bed and get up around the same time each day. However, if you only have one night to party in Amsterdam before your 9:00 AM train the next morning—live a little and hope for some nap time the next day.

After a long flight with no sleep, the urge to head to the hotel and draw the blackout blinds is strong. Resist. Get some coffee, walk around, see some stuff. Hopefully the excitement of a new city will help pull you through. You may be exhausted and not have the most fun the first day, but getting a regular sleep schedule to enjoy the rest of your trip is imperative. Hang in there and wait it out until after dinner, so that you can wake up at the appropriate time the next day (not at 2:00 AM).

4. If you need to sleep and aren’t tired, try melatonin.

Melatonin is a natural hormone that helps you regulate your sleep cycle and sleep easier. It doesn’t leave you groggy like sleeping pills, and is easily found in the vitamin section of your local drugstore. I use it now and then when I feel restless and need to get to sleep. Melatonin is a good natural way to help regulate your sleeping cycle in a new time zone and get over jet lag faster.

New foods and digestive issues aside (see our tips on avoiding traveler’s diarrhea), try to eat lots of veggies and lean protein, and avoid lots of sugars. Sugar gives you short bursts of energy followed by energy crashes. Try and eat healthy whenever possible.

6. Schedule at least one day off between coming home and going back to work.

Unfortunately, jet lag is always worse coming home. One day isn’t going to help you get back to normal right away, but it will help you catch up on rest, unpack, do laundry, go grocery shopping, and feel less frazzled and stressed out when you head back to work. If you can manage it, one or two days to take a vacation from your vacation is super helpful. 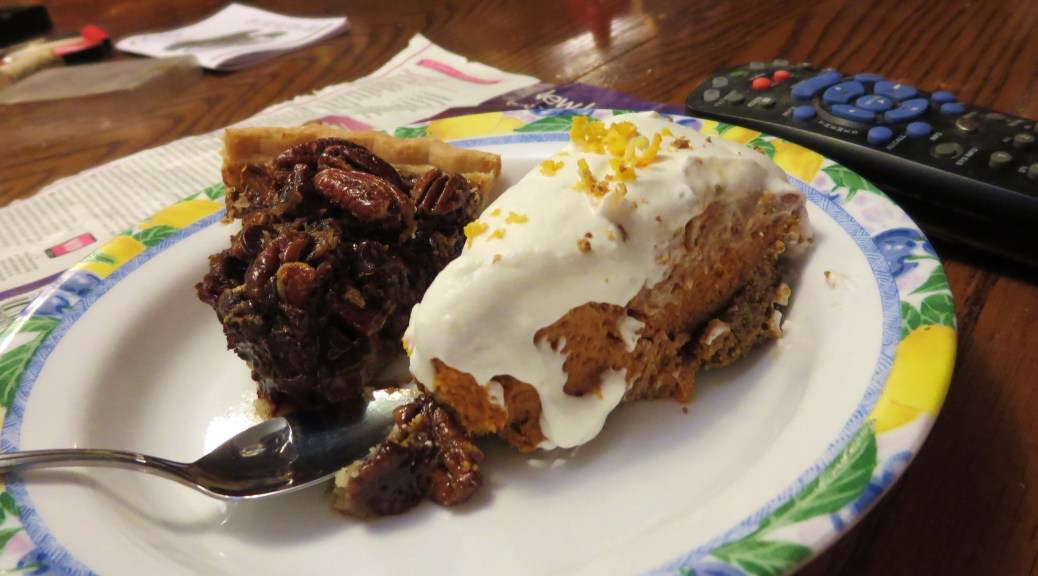 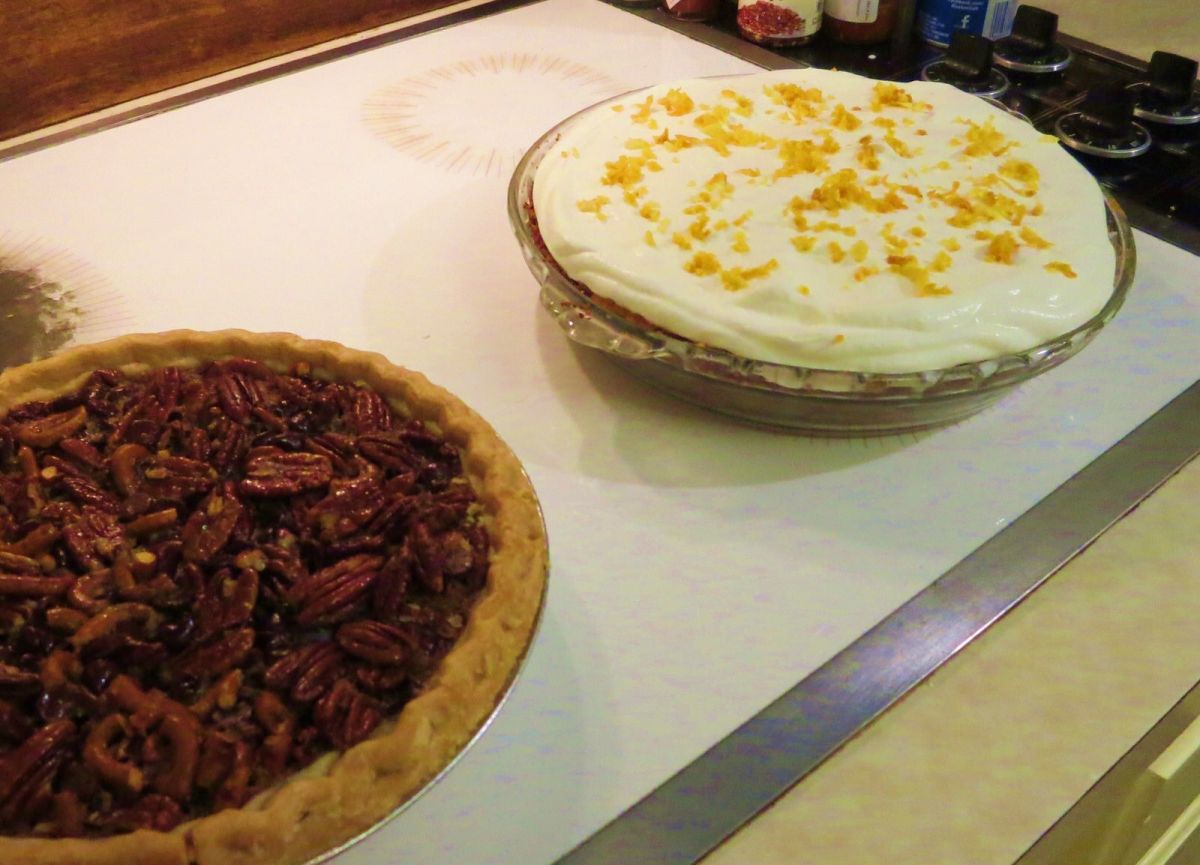 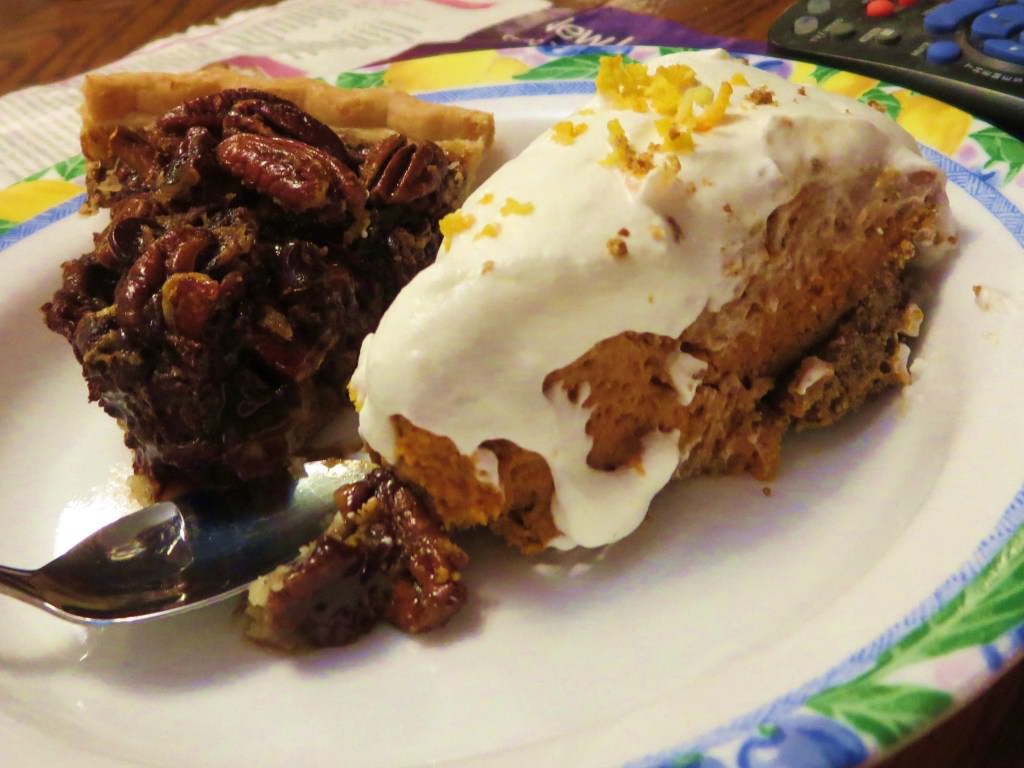 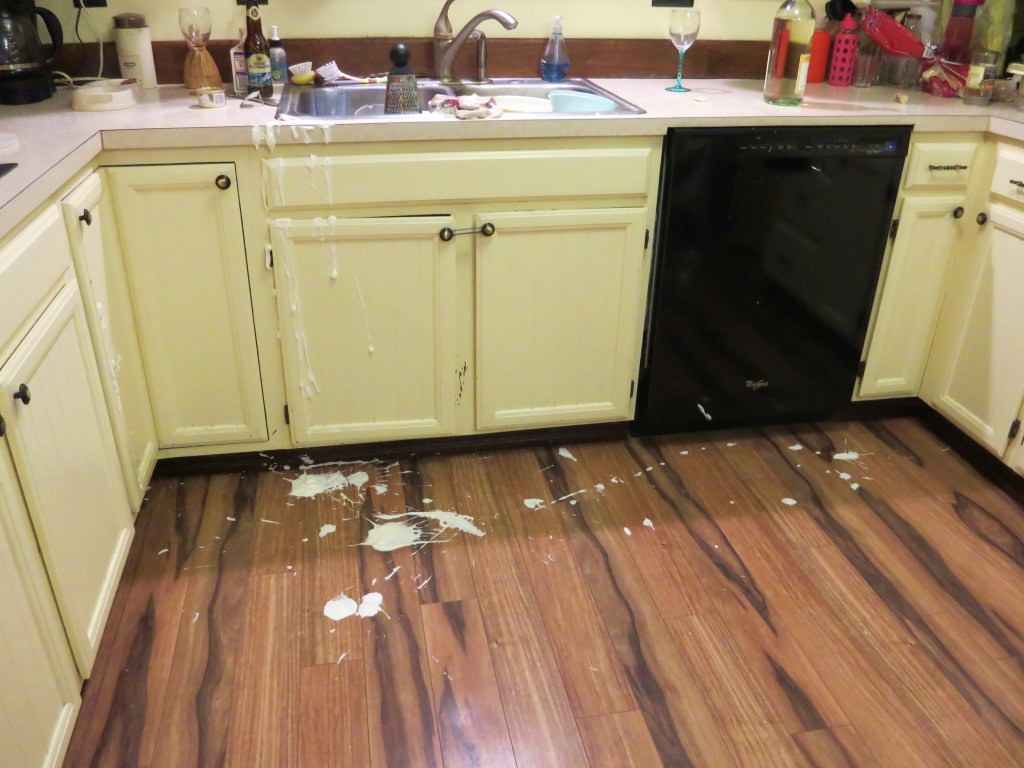